Alex Welborn, MLIS
Assistant Librarian and Archivist
Department of History and Philosophy of Medicine
University of Kansas School of Medicine

Lieutenant William T. Fitzsimons (1889–1917), an American officer in the Medical Reserve Corps, was the first United States Army officer to die in World War I. Fitzsimons, a University of Kansas alumnus and faculty member, died from wounds suffered during a German air raid on September 4, 1917, when bombs fell on Base Hospital No. 5 near Dannes-Camiers in Pas-de-Calais, France. Following his death, memorials to Fitzsimons were dedicated in Kansas City and across the country, including the renaming of Army Hospital #21 in Aurora, Colorado, to Fitzsimons Army Hospital in 1920. Through his sacrifice, William Fitzsimons wholly embodied the image of the selfless doctor and helped galvanize the nation against the atrocities of war. 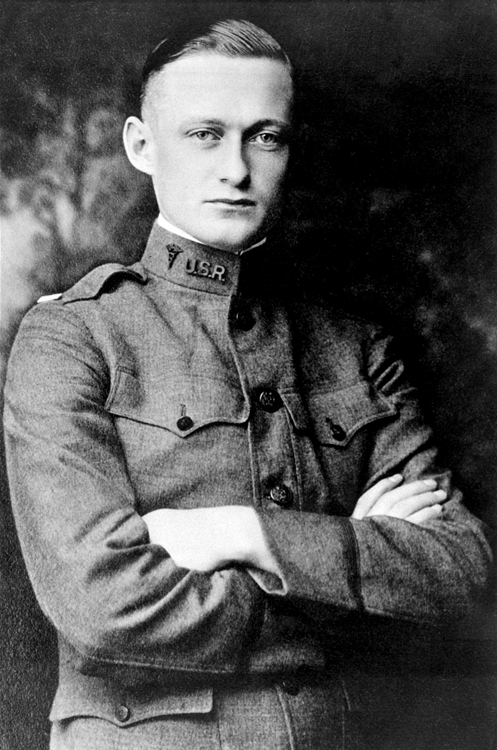 William Fitzsimons before his deployment in 1917. Fitzsimons was the first American officer killed by enemy action during World War I.

William Thomas Fitzsimons was born on April 18, 1889, in Burlington, Kansas, to J.I. and Catherine Fitzsimons. He attended St. Mary’s College at St. Mary’s, Kansas, before entering the School of Medicine at the University of Kansas in 1908. “Fitz” was well liked on campus because of his attentiveness to his work and his zeal for medicine. The 1910 Jayhawker yearbook speaks to the character of the young man, stating he was, “another youth who has buried his budding talents in the Medical School for the last two years,” and that, “even the terrors of physiology don’t seem to have worried him much.” He graduated with a Bachelor of Arts degree in 1910 and a Doctor of Medicine degree in 1912.

After graduating from the University of Kansas, Fitzsimons interned for one year at St. Mary’s Hospital in Kansas City, Kansas. In June of 1913, Fitzsimons left St. Mary’s for Roosevelt Hospital in New York City where he studied surgery. He remained at Roosevelt Hospital for fourteen months until September of 1914, when he accompanied the Red Cross on the first ship to Europe. He volunteered his medical services in England for six months under the direction of Sir William Osler and an additional seven months in Belgium until December of 1915, when he returned to the United States.

Upon his return, he practiced medicine from his offices in the Rialto Building in downtown Kansas City, received several hospital appointments, and joined the faculty of the University of Kansas as Assistant in Surgery in the School of Medicine. Deteriorating conditions in Europe, however, cut Fitzsimons’ time in Kansas City short. In April of 1917, he received orders assigning him to the Harvard Hospital Unit at Base Hospital No. 5 near Dannes-Camiers, on the coast of France. He left Kansas City for the front on June 15, 1917, and arrived in Liverpool on August 12. 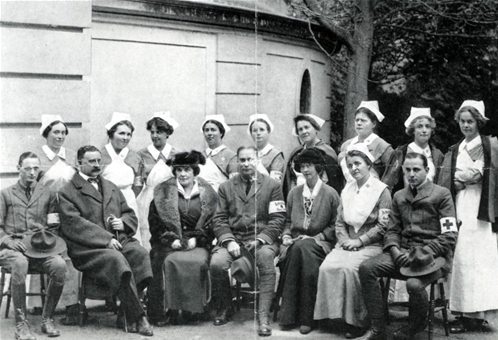 On the night of September 4, 1917, German bombs mortally injured Fitzsimons and several other soldiers at Base Hospital No. 5. According to reports, Fitzsimons died of shrapnel wounds suffered from a bomb that exploded at the door of his hospital tent. Private Leslie G. Woods of Streator, Illinois, Private Rudolph Rubino of New York City, and Private Oscar Letugo of Boston also perished in the attack. In addition to those killed, three first lieutenants, six privates, and one nurse also were injured. Adding insult to injury, the German aviators reportedly mocked their victims with pfennig coins they dropped as souvenirs from their planes.

Upon hearing news of the attack, Fitzsimons’ colleagues in Kansas City mourned the loss of their friend. Dr. J.F. Binnie, faculty member of the School of Medicine and a major in the Medical Reserve Corps, took the news particularly hard, stating, “I enlisted him. He was a good boy—a good boy.” Dr. Logan Clendening also commented on Fitzsimons’ death in a letter to Dr. E.H. Skinner of the Jackson County Medical Society, in which he wrote,

Since beginning this letter, I have been shocked at the news of Fitz’ death. After hearing about it, four medical officers who are shortly going to France, have told me that the first ten German officers they get in their wards are going to die mysterious deaths. When I said that wasn’t giving them much chance one of them asked how much of a chance poor Fitz had. And there was nothing to answer…. 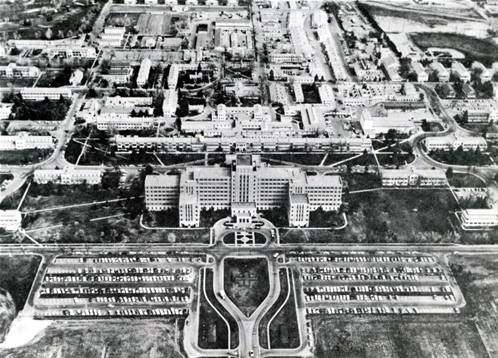 The Jackson County Medical Society mourned the death of the young doctor, eulogizing him in the Society’s publication, the Weekly Bulletin. The eulogy read in part,

His mission was not that of a combatant, but one wholly of mercy. Foe, as well as friend, that came under his care, received the same merciful attention. He, together with his fellow surgeons, and Red Cross nurses, constituted a band of mercy, carrying out as best they could, the fundamental principles of their professions, the relief of human suffering.

As news of the lieutenant’s death reached the public, an outpouring of sympathy occurred in Fitzsimons’ hometown of Kansas City, which culminated in a military mass at the Cathedral of the Immaculate Conception on September 12, 1917. Following a parade by local Army units, Kansas Citians, in both military and civilian dress, crowded the cathedral for the memorial mass. In his sermon to the packed cathedral, Bishop Lillis expressed the sentiments of all of Kansas City stating,

We, as citizens, have come here as proof of our appreciation for one of our own young men whose loyalty and great sacrifice endear his memory to all. He volunteered for service for our country in a far distant land. He made the greatest of human sacrifices. He gave his life. 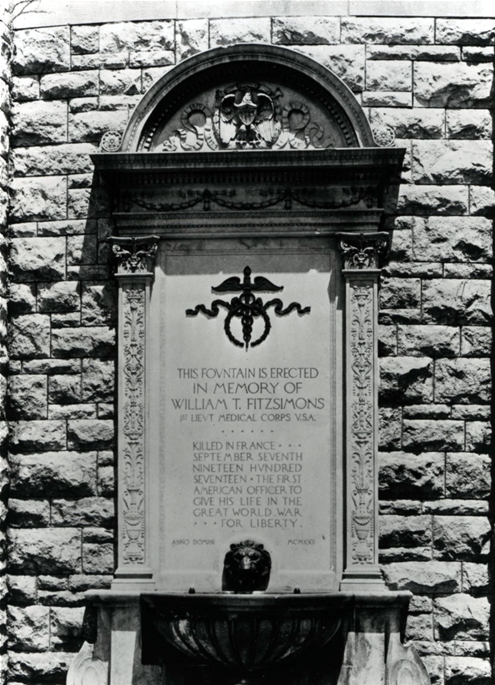 Over the years, Kansas Citians expressed their appreciation to Fitzsimons through several memorials erected across the city. On May 30, 1922, a memorial fountain was dedicated to the memory of the young lieutenant at 12th and the Paseo. Local citizens funded the fountain, which is embedded in a large stone terrace, through donations to a memorial fund.

Twenty-five years later on December 10, 1947, the American Legion’s Fitzsimons-Battenfeld Post No. 8 set a granite marker at 47th and The Paseo. The monument, now located at The Paseo and Volker Boulevard, commemorates both William T. Fitzsimons and Jesse R. Battenfeld, a flight surgeon who died during World War II. Like Fitzsimons, Battenfeld also had ties to the University of Kansas School of Medicine. 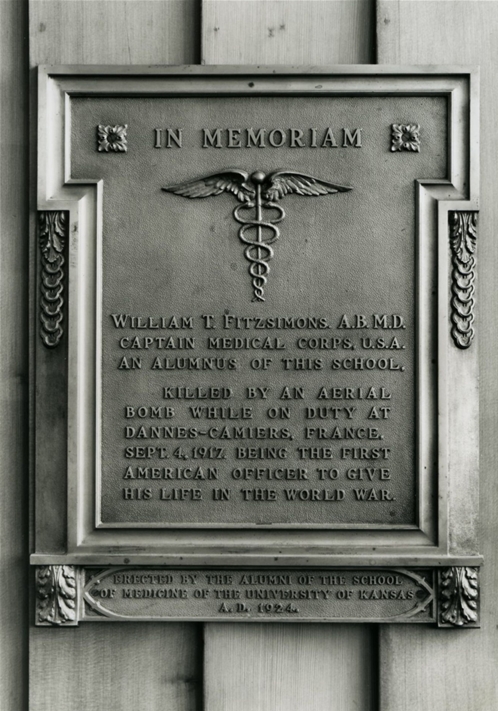 Bronze tablet dedicated in memory of William T. Fitzsimons by the Medical Alumni of the University of Kansas on October 16, 1924.

Fitzsimons’ colleagues from the University of Kansas School of Medicine also have shown their respects to the young doctor. On October 16, 1924, the Medical Alumni of the University of Kansas dedicated a bronze tablet in memory of Fitzsimons. In a speech to the attendees of the dedication, Surgeon General Merritt Ireland perfectly summed up the young lieutenant’s legacy, remarking, “While engaged in a merciful and noble calling, tenderly ministering to the wounded under his care, he fell at his post of duty. Of him, truly can the Nation say ‘well done, thou good and faithful servant.’” No truer words can be spoken of a young man who made the ultimate sacrifice early in his budding career in service to others.

The background information and images are from The Archives of the University of Kansas Medical Center.