The Death of The Red Baron

Frederick Holmes, MA, MD, FACP
Professor of Medicine Emeritus and of The History of Medicine
University of Kansas School of Medicine

Manfred Albrecht Freiherr von Richthofen was born into an aristocratic Prussian family in Breslau in 1892. Son of Major Albrecht Philipp Karl Julius Freiherr von Richthofen, his education was in a succession of military schools and academies. An excellent athlete and horseman he was commissioned in the First Regiment of the Uhlans Kaiser Alexander III in 1911 and after the war started in 1914 served on both the western and eastern fronts as a cavalry officer. In 1915 he transferred to the Imperial German Army Air Service (Luftstreitkräfte) and studied aerial tactics under the master German strategist, Hauptman Oswald Boelcke, flying his first combat mission after less than thirty hours of flight instruction. In spite of an indifferent start as a fighter pilot he nonetheless was invited to join Boelcke’s Jagdstaffel 2 squadron and soon excelled in combat following the Boelcke Dicta, which included approaching his enemy from above with the sun behind him, firing only at close range, always keeping his eyes on his target, and attacking in a group of four to six planes. 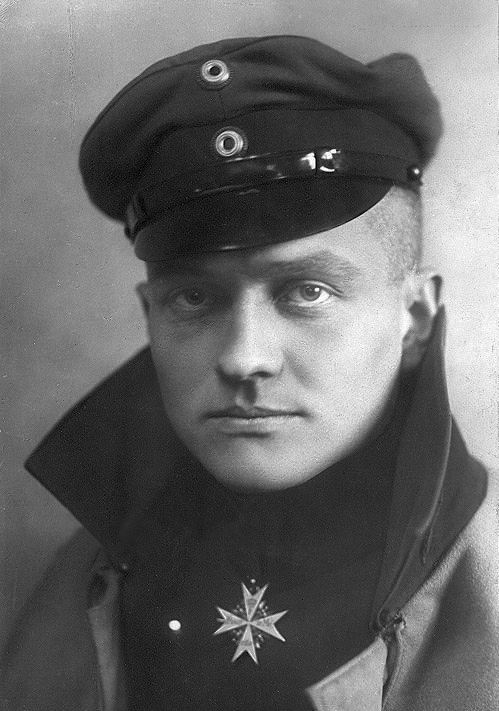 With the beginning of 1917 he had 16 confirmed kills, had been awarded Germany’s highest military decoration, Pour le Mérite, and was commander of a squadron, Jasta 11, of elite fighter pilots. In April 1917 alone he downed 22 British planes. Flying a series of Albatros aircraft his vanity led him to have each painted red. As the German ‘Freiherr’ was translated into English as ‘Baron’ it was but a short time until he was known to the world as ‘The Red Baron.’ His squadron was combined with three others to form Jagdgeschwader 1 which was widely feared as The Flying Circus. His younger brother, Lothar, was also a fighter pilot but far more daring than Manfred. Lothar had 40 confirmed kills and, ironically, survived the war. 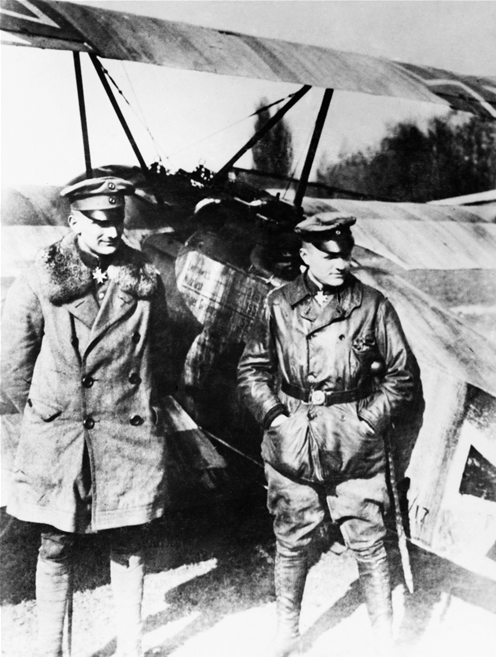 In July 1917 The Red Baron crashed in Belgium after being attacked by Captain Donald Cunnell of The Royal Flying Corps, sustaining a severe head injury, likely a skull fracture. In spite of blurred consciousness and visual compromise he had managed to land his plane. Over several months he flew occasionally and had several operations to remove bone splinters from his head wound. He suffered headaches and a distinct change in his personality which persisted until his death. Against medical advice he returned to regular flying with his group in October of 1917 downing 18 planes until his death six months later. At the time of his death he had downed 80 planes in all. He was the leading air ace of WW-I followed by René Fonck of France with 75 confirmed kills and Billy Bishop of Canada with 72. Both Fonck and Bishop lived on long after the war, each dying in the 1950s.

Von Richthofen met his end on 21 April 1918 in somewhat unusual circumstances. While pursuing a Canadian pilot with little experience and at a very low altitude (Lieutenant Wilfrid May) he was chased away by a seasoned Canadian pilot (Captain Arthur Brown) who dived steeply and fired at him before climbing to avoid crashing into the ground. The Baron resumed his pursuit of May but shortly, facing concentrated fire from Australian troops on the ground, he made a rough landing in a field near The Somme River. The soldiers, who had fired on his plane from the ground, got to his wrecked red Fokker triplane quickly and may or may not have heard his last words which, allegedly, included the word kaput. Exact accounts of damage to his plane by gunfire - before it was dismantled by soldiers seeking souvenirs - are not to be found. 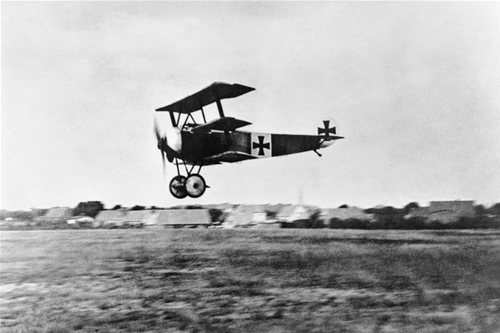 His body was taken to an Australian Flying Corps hangar at Poulainville, washed by a corpsman, and shortly examined by at least four medical officers. The body was not opened. An entrance wound and an exit wound were superficially identified and probed with a fence wire. Subsequent reports by two of these men - one a colonel and the other a captain - are not congruent. The most plausible conclusion of the several viewings of his body, immediately and a bit later, suggest that a single bullet entered von Richthofen’s right lateral chest, passed through his right lung and heart, and exited through his left chest. Before the red Fokker airplane was scavenged some thought that a single bullet hole on the right side of the cockpit lined up with his chest entry and exit wounds. His body was buried on 22 April in a village churchyard near Amiens, France, after a military funeral conducted by Commonwealth forces. 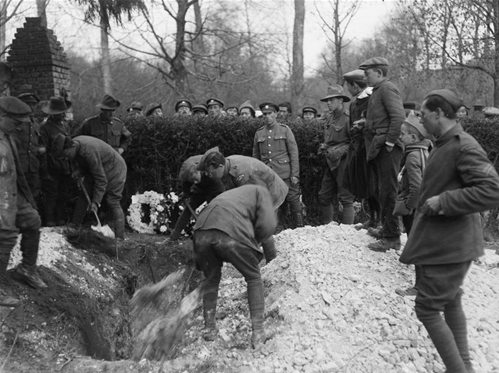 The myths and mystique associated with Manfred von Richthofen and his death resulted in immediate and continuing fascination by the press and other media. Captain Arthur Brown received a bar to his Distinguished Flying Cross but not the Victoria Cross, earlier allegedly promised by Britain for the man who killed The Red Baron. In spite of many claimants no Australian soldier received any decoration for causing von Richthofen’s end. The best scenario for the death of von Richthofen gives credit to Sergeant Cedric Popkin of the 24th Machine Gun Company of the First Australian Imperial Force who fired his Vickers machine gun at the red Fokker DR1 triplane as it banked to the left and fled to avoid fire from Lewis guns manned by Robert Buie and Snowy Evans. It can be assumed that the flying skills of The Red Baron were quite intact on 21 April for he had downed two enemy planes just the day before.

There was no glamour in trench warfare and precious few heroes. By contrast aerial warfare was the stuff of gallant knights of the air dueling in single combat far above the mud, misery, and mortality of the trenches far below them. That Baron von Richthofen was almost surely brought to his death barely above these trenches by a plucky Australian machine gunner remains a great irony of The Great War.

Images are from The Imperial War Museum in London and an unidentified source.