Setting Up Base Hospital #28 in France 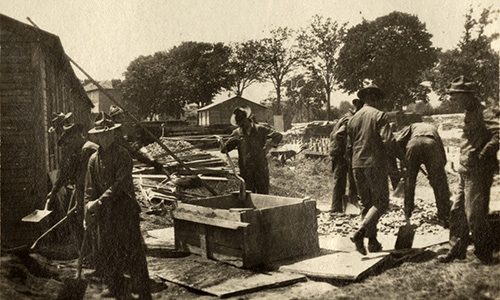 Having arrived at their final destination on 2 July 1918, exactly one month after leaving Fort McPherson in Georgia, the staff of Base Hospital #28  -  now including nurses  - found themselves on a very large tract of nearly empty land in Limoges, France, near Base Hospital #13 from Presbyterian Hospital in Chicago and Base Hospital #24 from Tulane Medical School in New Orleans. Along with other such medical complexes, by December 1918 there were 134 American base and evacuation hospitals numbering 163,368 beds in France, largely distributed among 22 centers of multiple hospitals, such as the one at Limoges.  In just a few weeks, with the help of 400 French laborers, they put up a score of prefabricated barracks buildings for wards. Subsequently the Bellaire Seminary, a partially-constructed girls' school, was requisitioned and completed as a hospital building. Tents were erected for convalescent patients. On paper Base Hospital #28 was constituted at 1,780 beds but during emergencies expanded to 2,985 beds and was the largest of the three Limoges hospitals. On 21 July 1918 they received their first patients. 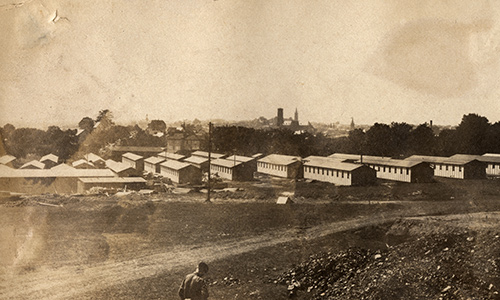 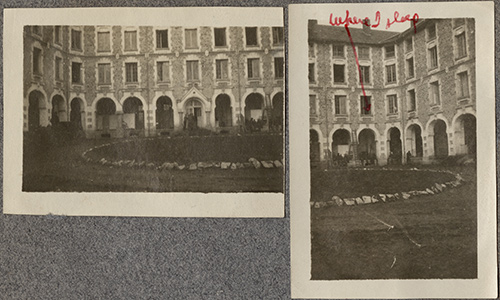 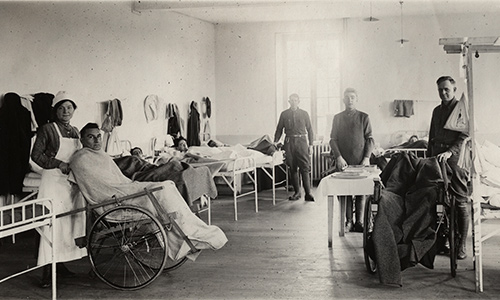 In addition to working with the French laborers on construction, the non-medically trained enlisted men were taught specific techniques to assist surgeons, anesthetists, and pathologists. Illustrative of the planning and ingenuity of the coordination of efforts was the creation of a medical laboratory which proved to be of comparable quality to that of a large American hospital. By accident of design one of the 20 barracks buildings was not completed and it was possible to turn it into a purpose-built hospital laboratory, put to use with the arrival of the first patients. This large facility was capable of doing all hematologic and chemical analyses then possible, thus, bacteriology, serology, gross and microscopic pathology, autopsies, water and milk analyses, and epidemiological survey work.

The base hospital clusters were located from 50 to 200 miles from the front. Transport of sick and wounded soldiers was largely accomplished by the excellent French railroads using express ambulance trains of up to 20 specially adapted coaches. A single train, staffed by doctors, nurses, and corpsmen, could take as many as 500 patients from the front to a base hospital in a matter of hours. On the Base Hospital #28 station platform the sick and wounded were triaged and, in most cases, sent to be deloused, bathed, and their uniforms exchanged for clean pajamas and robes. Using the patient as his own medical record pathological findings, treatment details, and diagnoses were often written on his skin in indelible ink, and he was then taken by stretcher to the appropriate ward.  The process of "renovation" as Captain Sherman Hibbard described it, was the transformation of filthy, louse-infested, weary, sick and wounded soldiers into clean patients with warm meals in their stomachs. 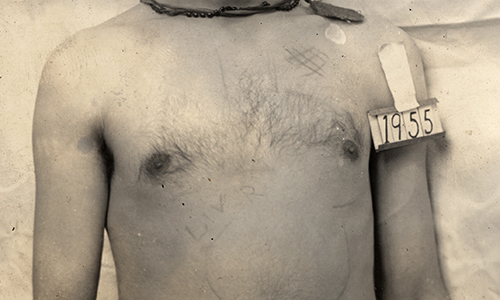 Hibbard was in command of The Registrar's Office, the axis around which the hospital revolved. His record of this office is beautifully documented in "History Registrar's Office, Base Hospital No. 28 USA." Under his leadership the several divisions functioned smoothly. Thus, The Receiving and Admissions Ward was responsible for triage of arriving patients and their "renovation." Most patients were sent immediately to the appropriate specialty ward for treatment, and a few kept in the admissions ward for definitive diagnosis. Medical records were created by typists before actual admission to the wards and stayed with the patients throughout their hospital stays. However, these records were maintained by The Sick and Wounded Office which was charged with the responsibility for everything else pertaining to patient records and statistics. They kept a daily record of all hospital statistics, including those patients considered seriously ill and those ready for discharge. Patients were further stratified as walking, sitting, and lying. Another division, The Information and Post Office, took care of a large volume of mail for patients and staff, numbering about 10,000 pieces per week. The Detachment Office was the administrative unit for the hospital staff and kept all personnel and payroll records. Unit discipline was a responsibility of this office as well as oversight of chaplaincy services, community relations, relations with the Red Cross and the YMCA, and all matters pertaining to relations with other American, British, and French military units. The Patients' Property and Evacuating Office kept patients' personal effects when they were in the hospital and washed, sterilized, repaired, and reissued uniforms which patients gave up on admission. This office also was responsible for returning soldiers to duty, transferring them to other hospitals as appropriate, and evacuating them home to America. 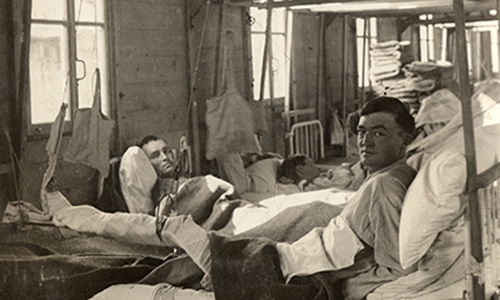 Eventually, with ongoing additions, Base Hospital #28 actually had 2,908 beds.  There were 23 single- story ward buildings of 64 beds each, making 1,472 beds in the newly constructed portion of the hospital. The Bellaire Seminary had 1,136 beds and there were 300 tented beds. Patient movement around this sprawling hospital complex was walking, if they could, or by stretcher if they could not walk.

Base Hospital #28 Wards and Attending Physicians and Surgeons

Base Hospital #28 never lost its close association with Kansas City and the medical staff remained remarkably stable during the six months it was in operation and treating patients. In fact, per General Orders No. 147, GHQ, AEF, dated 2 September 1918, it was announced that 31 officers were entitled to wear the War Service Chevron as staff members of Base Hospital #28. They were, as listed herewith:

Each of these men was an officer of the US Army Medical Corps, with the exception of Harry S. Dunmire who was an officer in the Quarter Master Corps.  None of the officers had military experience though Lindsay Milne had served very briefly in the British Army during the Boer War but was sent home because he was only sixteen years old. Perhaps because of his skill with languages he had also served in Mexico for several months before joining Base Hospital #28 in Georgia. 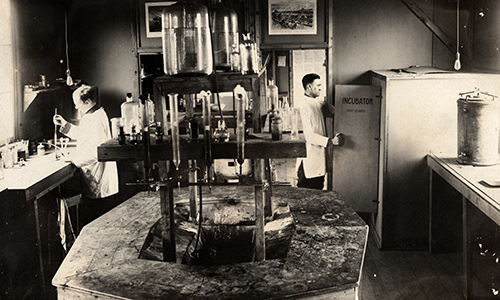 One of the Hospital's Laboratories

By August the hospital was running at full speed and was admitting and discharging patients smoothly and efficiently. Because of his eminence and experience John Binnie was often away as a consultant to other hospitals and he also led teams of surgeons and nurses who worked at Field Hospitals close to the front. When patient care demands were light a few medical staff members were allowed to be away from the hospital attending medical meetings and training sessions in Paris and elsewhere in France.