By March 1917 the people of America were ready to go to war with Germany. In this spirit Dr. John Binnie, Professor of Surgery, and Dr. Lindsey Milne, Professor of Medicine, of the University of Kansas School of Medicine, were instrumental in convening a group of Kansas City doctors at the new Christian Church Hospital on 1 April 1917, to discuss formation of a large general military hospital to be sent from Kansas City to France.  Enthusiasm was high and many physicians and surgeons were ready to join the staff of this new and unique hospital. Binnie, already in his fifties and a world-renowned surgeon, was the obvious choice to be the senior officer of the new hospital. Milne, a physician younger by twenty years, and also of considerable eminence as a researcher, naturally assumed the position as Binnie's second in command. By curious coincidence both were born in Scotland and had emigrated to Kansas City in the early years of the twentieth century. 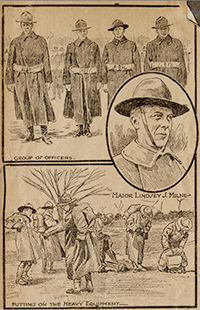 Recruitment to the staff of the now-designated Base Hospital #28 started immediately and proceeded smoothly. Doctors from the Kansas City medical community were enlisted but allowed to continue with their private practices until the actual mobilization of the hospital in the spring of 1918. Enlisted men, who would serve in supporting roles, were recruited from the greater Kansas City area. Recruitment of nurses, at both qualified and assistant levels, was largely handled by The American Red Cross and not specifically identified with Base Hospital #28, though, ultimately, most of the hospital's nurses were from Kansas and Missouri. The city and its citizens were deeply involved in the development of the hospital. News stories, photographs, and even cartoons emanated almost daily from the hospital's temporary headquarters in the recently completed Union Station as the illustrations show.  Training sessions were conducted at Union Station and, by the standards of the U.S. Army and The American Red Cross, uniforms and equipment were issued to some of the hospital's personnel. 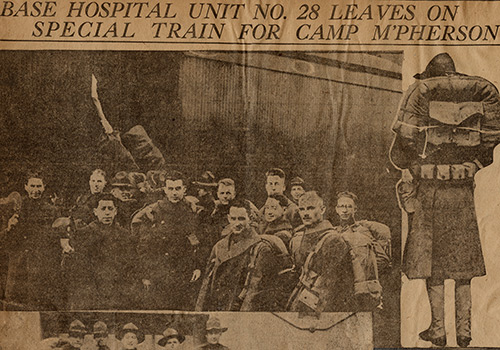 On 22 February 1918 six officers and 149 enlisted men departed from Kansas City on a special train bound for Fort McPherson, Georgia, to join Base Hospital #6 in medical and military training for overseas service. Colonel Donald Bannister, a regular army physician and veteran of the Boxer Rebellion, was in command and remained so until the hospital was situated in Limoges, France. Herbert Ridgway was named Sergeant-in-Charge of the Registrar's Office, a position and service that would remain crucial to the smooth operation of the hospital until its demobilization a year later. In addition to military exercises of various sorts, classes and training sessions were conducted in treatment of shock, injuries from poison gas, limb amputation, identification and removal of shell fragments, and reconstructive surgery. 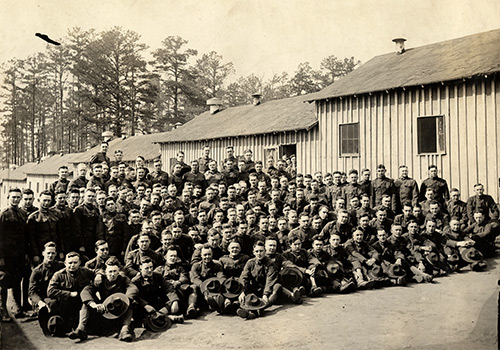 On 2 June 1918 the hospital staff, now numbering 34 officers and 201 enlisted men, left Fort McPherson for Camp Merrit, New Jersey, and embarcation on the SS Megantic, a White Star Liner, now the troop ship that would take them to England on their way to Limoges, France. Escorted in a convoy of troop ships by the naval cruiser, USS San Diego, the trip was marked by a diversion around Ireland to avoid a flotilla of German torpedo boats. Finally landing at Liverpool the hospital staff went by train to Southampton where an old Irish channel boat, the Antrim, took them across the English Channel to Cherbourg in France and the Hommes 40 train that would take them on to their final destination, Limoges. The hospital's nurses, one hundred young women, traveled separately. 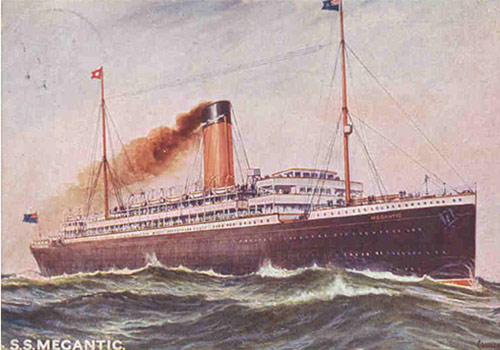 Next: "Setting Up in France"