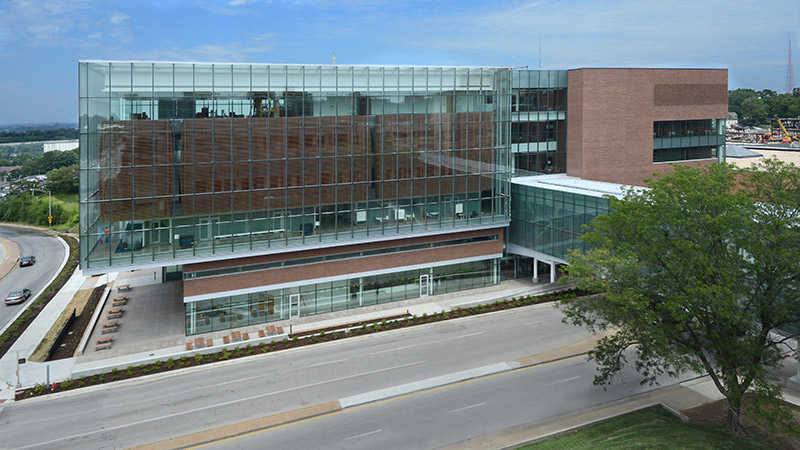 July 27, 2010: The first ovarian transplant in the state of Kansas and the Kansas City area is performed at The University of Kansas Hospital by Daniel Kim, M.D.

June 14, 2011: The National Institutes of Health (NIH) officially announces that the University of Kansas Medical Center is a recipient of a prestigious $20 million Clinical and Translational Science Award (CTSA). The five-year grant puts the medical center among an elite, 60-member group of universities collaborating on clinical and translational research, which transforms laboratory discoveries into treatments and cures and gets them to patients faster.

July 2011: The University of Kansas School of Medicine campus in Salina opens. With a class of eight students, the Salina campus is the smallest four-year medical-education site in the country. This innovative medical education program, aimed at students with a strong desire to practice in rural areas, is featured in a front-page story in The New York Times.

August 25, 2011:  The School of Allied Health is renamed the School of Health Professions.

July 12, 2012: The University of Kansas Cancer Center is designated as a National Cancer Institute (NCI) cancer center, capping a nearly decade-long effort that brought top cancer researchers, access to advanced care and millions of dollars in cancer research funding to the region and inspired profound advances in the care of cancer patients.

2012: The KU-Community College Partnership is finalized with 18 Kansas community colleges to allow nursing students to progress seamlessly to the KU BSN degree.

2012: Steven Stites, M.D., is appointed acting dean of the KU School of Medicine and acting executive vice chancellor of the KU Medical Center.

2012: Garold Minns, M.D., is appointed dean of the KU School of Medicine-Wichita.

October 31, 2013: A new treatment option for heart disease is tested at The University of Kansas Hospital as a possible breakthrough in the way patients manage their own health. The trial studies a new implantable monitoring device designed to allow doctors the ability to better personalize treatment for heart failure patients while giving those patients more control of their chronic condition.

November 8, 2013: The combined Hematology, Oncology and Blood and Marrow Transplant Unit at The University of Kansas Hospital receives the first-ever PRISM Award TM, a new honor recognizing "exceptional nursing practice, leadership, and outcomes in hospital medical-surgical units across the country." The award comes from the Academy of Medical-Surgical Nurses and the Medical-Surgical Nursing Certification Board.

2013: The School of Nursing is selected as a Center of Excellence in Nursing Education by the National League for Nursing, one of only 23 schools honored.

2013: Douglas A. Girod, M.D., is appointed interim executive dean of the KU School of Medicine and executive vice chancellor of the KU Medical Center.

February 2014: The University of Kansas Hospital is named one of Healthgrades America's 100 Best Hospitals TM. Recognized for achieving clinical outcomes consistently, it is the only Kansas City area hospital so honored.

May 12, 2014: The Kansas University Department of Internal Medicine is one of the first places in the country to be recognized as a patient-centered specialty practice. The National Committee for Quality Assurance (NCQA) recognized the department for its responsiveness to patients and medical colleagues, cooperation and integration with other health care groups, and dedication to continuous improvement. This is the second time that NCQA has recognized the Department of Internal Medicine. In 2011, the department earned national recognition as a patient-centered medical home, a model of care emphasizing care coordination and communication to transform primary care.

April 2015: Cardiologists at The University of Kansas Hospital are among the first in the nation with a new tool, smaller than a triple-A battery, to help them treat their patients. The device, called the LINQ, is slipped just beneath the patient's skin in about 30 seconds in a doctor's office, rather than an operating room, and is seen as a huge leap forward in patient comfort and monitoring.

May 16, 2015: The first four-year classes graduate from the KU School of Medicine campuses in Wichita and Salina.

June 2015: John A. Ferraro, Ph.D., is appointed interim dean of the KU School of Health Professions.

2015: KU School of Nursing ranks #20 in U.S. News and World Report as one of best graduate programs at public universities out of over 500 such programs nationally.

July 1, 2017: Douglas A. Girod, M.D., is appointed chancellor of the University of Kansas.

July 1, 2017: Robert D. Simari, M.D., is appointed interim executive vice chancellor in addition to his role as executive dean of the KU School of Medicine.