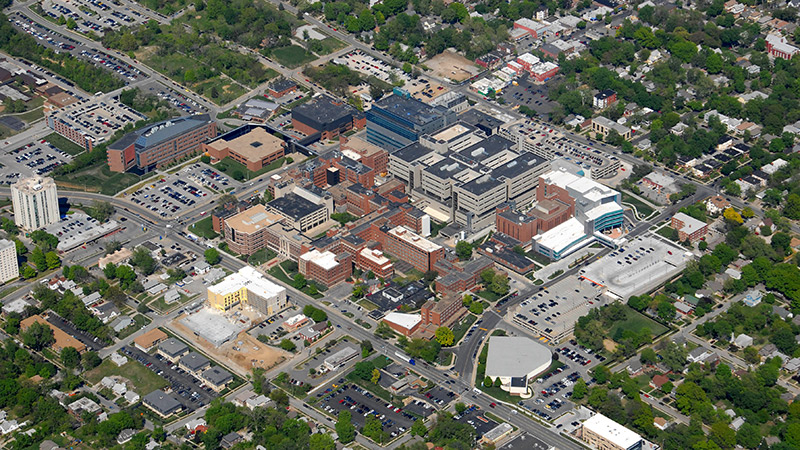 July 2000: The new KU School of Nursing building is dedicated. It is the first building on the KU Medical Center campus to be devoted to one school.

2000: The Kidney Institute is founded. Jared Grantham, M.D., serves as the institute's first chairman and director.

2001: S. Edwards Dismuke, M.D., is appointed dean of the KU School of Medicine-Wichita.

2001: The National Database for Nursing Quality Indicators (NDNQI) moves from the Midwest Research Institute to the KU School of Nursing. The NDNQI gathers unit-specific quality indicators from hospitals throughout the nation, allowing them to compare their patient outcome results to others at like institutions.

2001: The Hall Family Foundation gives $42 million to KU, the largest private donation to an institution of higher learning in Kansas history. The bulk of the donation, $29.5 million, goes to life sciences research at KU Medical Center.

2002: Barbara Atkinson, M.D., is appointed executive dean of the KU School of Medicine.

2002: Charles B. Wheeler, Jr., M.D., J.D., (M'50), is elected Missouri state senator from the 10 th District. Dr. Wheeler served as the Jackson County, Missouri, coroner in 1964, and then was elected as the western judge of the Jackson County Court, where he served two terms.  He was elected mayor of Kansas City in 1971, and held that post for two terms. In 1979, Dr. Wheeler returned full-time to his position as director of the Wheeler Medical Laboratories. Author of Doctor in Politics (1974), he received the Distinguished Alumni Award in 1997.

2002: The Bone Marrow/Hematopoietic Stem Cell Transplant Program, directed by Barry Skikne, M.D., is fully accredited by the Foundation for the Accreditation of Cellular Therapy (FACT).

2002: Dennis Bresnahan, M.D., is appointed director of the newly developed KU Med Congestive Heart Failure and Cardiomyopathy Center - the first such center in the region.

2002: KU Medical Center is recognized as the world leader in the use of a gastric pacemaker for the treatment of gastroparesis. The team of gastroenterologist Richard McCallum, M.D., surgeon Jameson Forster, M.D., and Irene Sarosiek, M.D., gastrointestinal clinic research coordinator, and associates, are presented awards by Medtronic, Inc. Dr. McCallum, director of the Center for Gastrointestinal Nerve and Muscle Disorders, was nationally recognized for pioneering gastric pacing and electrical stimulation of the stomach.

2002: The School of Nursing Corporation transitions to KU Health Partners to allow the inclusion of KU School of Allied Health faculty.

2003: The KU Center for Healthcare Informatics is created and housed in the School of Nursing. This is the only KU Medical Center facility to be established outside the KU School of Medicine.

May 12, 2004: The University of Kansas Hospital, KU Medical Center, and the University of Kansas Endowment Association announce that they are undertaking a joint venture with the Steve Palermo family to help create one of the premier facilities for paralysis research in the United States - the Steve Palermo Endowment for Spinal Cord Injury, Research and Education. Palermo, a former major league baseball umpire, was paralyzed in 1991. Over the years, he raised more than $3 million for spinal cord injury research.

July 2004: The KU School of Medicine is awarded an $18 million grant for life sciences research from the National Institutes of Health. Joan Hunt, Ph.D., senior associate dean for research and graduate education, serves as principal investigator.

August 30, 2004: A patent is submitted for the Actifier, the world's first high-tech pacifier that analyzes how a baby sucks in relation to swallowing and breathing, and prompts the baby to do it correctly. The device, developed by Steven M. Barlow, Ph.D., director of the Communication Neuroscience Laboratories, and Don Finan, Ph.D., assistant professor of speech-language-hearing sciences at the University of Colorado, is designed to explore whether improvements in nursing for premature infants can reduce developmental disabilities such as problems with speech and language.

September 2004: The University of Kansas Hospital's Trauma Program was recertified at Level I by the American College of Surgeons. First certified at Level I in September of 2000, the designation represents the highest level that any trauma program in the United States can attain. The ACS level has been awarded to only 95 programs in the U.S.

November 12, 2004: The KU School of Medicine receives a National Institutes of Health grant and two Health Resources and Services Administration grants totaling $11.9 million to recruit and retain underrepresented minority students and faculty at the school.

2004: A new positron emission tomography/computerized tomography (PET/CT) scanner is installed in the Department of Nuclear Medicine. Combined with the new chest X-ray unit in the KU Cancer Center, these devices make KU Medical Center the leading medical imaging facility in the region.

January 1, 2005: Barbara Atkinson, M.D., executive dean of the School of Medicine, is appointed the first woman executive vice chancellor of KU Medical Center. Dr. Atkinson is the only woman in the United States to hold both positions simultaneously.

April 21, 2005: One hundred years ago, the Kansas Board of Regents signed the resolution forming the University of Kansas School of Medicine in Rosedale, Kansas.

July 1, 2006: The School of Nursing takes over management of the Silver City Clinic located in the Argentine District of Kansas City, Kansas - the first and only nurse-managed safety net clinic in the region.

2006: The centennial of the KU School of Nursing is celebrated.

Surgery in progress, 2000
School of Nursing building, circa 2000.
Clinical laboratory service, 2003
Hemenway Life Sciences Innovation Center, circa 2009.
The Schools of Medicine and Nursing celebrated their centennials in 2005 and 2006, respectively.
Center for Advanced Heart Care, circa 2010.
KU School of Medicine