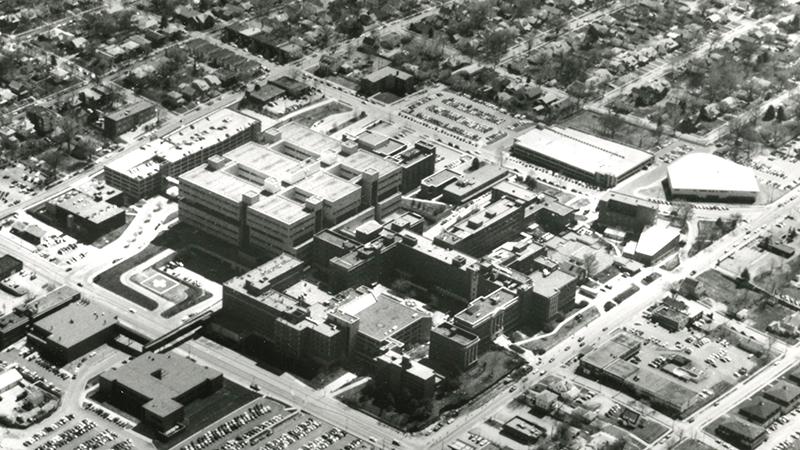 1990: KU Medical Center's Rehabilitation Unit becomes the only one in Greater Kansas City and Kansas accredited by the Commission on Accreditation of Rehabilitation Facilities.

1990: KU Medical Center researchers, led by James Cook, M.D., professor of medicine and director of the International Center for Control of Anemia, develop a new iron supplement that was absorbed three times better, with fewer side effects, than supplements that were currently in use.

1990: KU Medical Center is the first institution in the Midwest to use microplates made of vitallium in craniofacial surgery.

1990: Bartender and local legend Jimmy Bowers retires from Jimmy's Jigger and is given a Meritorious Service Award by KU Medical Center.

October 1, 1991: KU Medical Center receives a $2.8 million grant from the National Institute on Aging to create an Alzheimer's Disease Center. KU Medical Center was one of only 12 institutions in the United States to be awarded this grant.

1991: The team of Gerald Kerby, M.D., professor of medicine, Linda Mayer, RN, and Susan Pingleton, M.D., are the first in the United States to develop a nasal mask ventilator that allowed patients with diseases that weaken breathing muscles to breathe more efficiently and comfortably.

1991: John A. Ferraro, Ph.D, associate dean and chair of the Department of Hearing and Speech, is appointed acting dean of the School of Allied Health.

September 1, 1993: The Sutherland Institute, led by John Hiebert, M.D., a unique facility for physical and facial reconstruction and rehabilitation, is dedicated.

1994: Daniel Hollander, M.D., is appointed dean of the KU School of Medicine.

October 5, 1995: The first pallidal stimulation in the United States for the treatment of Parkinson's disease is performed at KU Medical Center by Steven Wilkinson, M.D., and William Koller, M.D.

1995: Herbert Swick, M.D., is appointed interim and acting dean of the KU School of Medicine.

1995: The University of Kansas Hospital is the first in the Kansas City area to perform matched unrelated donor (MUD) bone marrow transplantation.

1995: The Wichita Campus begins its first major expansion, with construction starting on the Kansas Health Foundation Center for Primary Care and the Daniel K. Roberts Center for Research.

1995: Ed LeCluyse, Ph.D., becomes one of the few researchers in the United States to successfully grow human liver cells in a Petri dish long term. The technique allows cell biologists their first look at liver function on a cellular level to see how drugs are deactivated in the body and what causes liver failure.

1995: Virologist Bill Narayan, DVM, Ph.D., Marion Merrell-Dow Distinguished Professor and director of the Laboratories for Viral Pathogenesis at KU Medical Center, draws worldwide attention when he succeeds in developing a virus, KU SHIV, which causes AIDS in monkeys. This breakthrough speeds the development of new vaccines and drugs to fight AIDS.

1995: Kidney research by Billy Hudson, Ph.D., chair of biochemistry and molecular biology, leads to the discovery of the genes that cause two serious renal diseases - Alport's syndrome and Goodpasture's syndrome.

1995: The School of Nursing virtual classroom for online learning is launched, breaking new ground, and leading the nation in high-tech, long-distance education.

March 1996: The University of Kansas Hospital becomes one of the first medical facilities in the United States to offer a treatment for cytomegalovirus (CMV) retinitis, a potentially blinding condition that often attacks AIDS patients. KU Medical Center ophthalmologist and retinal surgeon Keith Warren, M.D., is the first physician in the Kansas City area to treat CMV retinitis with a device implanted directly into the patient's eye.

April 1996: Donald Eckard, M.D., neuroradiologist, becomes the first physician in Kansas to perform a procedure that uses platinum coils to fill balloon-like aneurysms in the brain which previously had been considered inoperable.

1996: Joseph Beshare, Ph.D., professor and chair of anatomy, and Carla Green, Ph.D., discover a gene thought to be a component in the working of the circadian clock. It was the first candidate for a circadian clock gene in vertebrates.

1996: The University of Kansas Cancer Center is the first in the area to use mammotomy, or stereotactic core needle biopsy, to sample tissue suspicious for breast cancer.

1996: Virginia J. Savin, M.D., KUMC professor of medicine, Division of Nephrology and Hypertension, publishes, with others, "Circulating factor associated with increased glomerular permeability to albumin in recurrent focal segmental glomerulosclerosis (the Savin Factor)" in the New England Journal of Medicine, (Apr) 334:878 1996. This article provided a major advance in the understanding of focal segmental glomerulosclerosis.

1997: Deborah Powell, M.D., is appointed executive dean of the KU School of Medicine.

1997: As part of an FDA study, KU Medical Center neurologist William Koller, M.D., implants a "brain pacemaker" in 60 patients over three years for relief of essential tremor or Parkinson's disease. These clinical trials led to FDA approval for the new tremor control therapy for general use on August 4, 1997, thus clearing the way for thousands of people with essential tremor or Parkinson's to gain relief.

October 1, 1998: The University of Kansas Hospital becomes an independent public authority, a step that leads to the hospital's transformation to a top academic medical center on the forefront of U.S. medical care.

1998: KU Medical Center is the first facility in the region to acquire a patient simulator used to train anesthesiologists and anesthesiology students.

1998: The Virtual Classroom, an internet website spearheaded by the KU School of Medicine, draws nationwide attention in Time magazine and on CNN for its innovative approach to web-based instructional courses. Virtual Classroom serves the Schools of Medicine, Nursing, Allied Health, Pharmacy, Graduate Studies, and Continuing Education.

1999: The KU Women in Science and Medicine (WIMS) organization is founded to serve all faculty and trainees from the School of Medicine, School of Nursing, and the School of Health Professions. Their mission is focused on advancing the careers of women in the fields of medicine and science through development of mentoring, networking, and faculty retention.