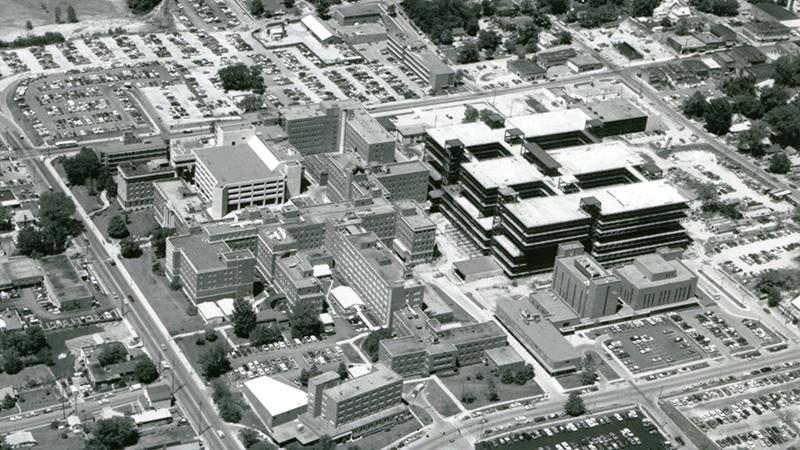 An aerial view of the Medical Center showing the new hospital under construction, circa 1976.

1970: Maud Adams, RN, is appointed acting chair of the Department of Nursing Education.

1971: Hester Thurston, RN, is appointed acting chair of the Department of Nursing Education.  Thurston would remain in the position and become the first dean of the School of Nursing in 1974.

1971: The Medical Record Administration program is initiated for post-baccalaureate students.

1971: The KU Department of Family Practice is established.

1971: Creighton Hardin, M.D., becomes the first surgeon in the world to perform reattachment of a completely severed upper arm with return of function.

1971: Nine minority students are admitted to the freshman medical class financed by the Summer Enrichment Remedial Program of the American Association of Medical Colleges (AAMC).

1972: Under the guidance of Ruth Gordon, B.S., chair of dietetics and nutrition, KU Medical Center joins Kansas State University to provide clinical experience for students in the Coordinated Undergraduate Program in Dietetics.

1972: The original KU School of Medicine site on "Goat Hill" is purchased and razed by the Urban Renewal Agency of Kansas City, Kansas.

1972: The Nurse Practitioner Program, in cooperation with the Departments of Human Ecology and Community Health and Nursing, graduates its first students.

1972: John C. Wong, Ed.D., assistant clinical professor of human ecology, is named director of the new Topeka-based Consortium for Education Planning and Coordination of Health Occupations, the most highly organized health-training program in the United States.

April 13, 1973: Kansas Governor Robert Docking signs Senate Bill 280 into law, providing nearly $60 million for KUMC's expansion program. In 1975, ceremonies mark the groundbreaking for the new University of Kansas Hospital, which would open in 1979. This was the largest building project in the history of the state of Kansas.

May 22, 1973: The Gene and Barbara Burnett Burn Center is dedicated. The Burn Center is funded entirely by $550,000 in private donations largely solicited by David W. Robinson, M.D.

July 1973: W. Kendall McNabney, M.D., (M'62), establishes one of the first emergency medicine residency programs in the United States at the University of Missouri's Truman Medical Center in Kansas City, Missouri. While serving as a field surgeon during the Vietnam War, Dr. McNabney facilitates in the development of the triage system.

September 4, 1973: The Detection Center for Breast Diseases, one of six in the nation, and funded by an $8 million grant from the American Cancer Society and the National Cancer Institute, is officially dedicated by Kansas Governor Robert Docking.

October 1973: Frederick L. Whittier, M.D., assistant professor of medicine and chief of the nephrology section, is one of the founders of the Midwest Organ Bank. In 1975, Dr. Whittier receives the Distinguished Service Award from the Kidney Foundation of Kansas and Western Missouri.

1973: Max S. Allen, M.D., (M'37), is the first recipient of the Hashinger Professorship in Gerontology. Allen devoted his entire professional career to teaching KU Medical Center students, interns, and residents, and was recognized as an outstanding instructor of clinical medicine.

1973: Under the direction of Barth Hoogstraten, M.D., professor of internal medicine, the Southwest Oncology Group, a large consortium of physicians and institutions from the United States and foreign nations, locates its headquarters at KU Medical Center. The group was one of the world's primary resource centers for information about cancer and the treatment of many forms of the malignant disease.

February 6, 1974: A mobile medical unit, sponsored by the United Tribes of Northeast Kansas and funded by the Kansas Regional Medical Program, directed by Robert W. Brown, M.D., screens more than 200 Native Americans in the Holton, Kansas, area. The program is unique in that the idea and impetus for funding came from the Tribal communities.

February 1974: The KU School of Allied Health is established by the Kansas Board of Regents.

1974: The Emergency Medical Training Program is founded as a subdivision of the Department of Surgery in order to fulfill the statutory mandate created by Kansas Senate Bill 328.

1974: The first 15 medical students begin classes on the new KU School of Medicine campus in Wichita.

1975: The first School of Medicine medical students on the Wichita campus graduate.

January 1976: Russell Miller, MHA, vice chancellor for KUMC Administration and a full colonel in the Reserve of the Air Force Medical Service Corps, receives the Joint Military Service Commendation Medal by the U.S. Secretary of Defense for meritorious service from 1972 to 1975 in advising defense department officials on the organization and construction of the new Uniformed Services University of Health Sciences in Washington, DC.

1976: Ralph Robinson, M.D., director of nuclear medicine, develops Strontium-89 for the palliation of painful bone metastases. Sr-89 is the first non-iodine therapeutic radiopharmaceutical ever approved by the Food and Drug Administration.

1976: Richard A. Walsh, M.D., is appointed associate dean of the KU School of Medicine-Wichita.

1976: William R. Jewell, M.D., professor of surgery and chief of the section of surgical oncology, develops a new type of immunotherapy, which doubles the survival rates for patients with melanoma.

1976: KUMC's computerized tomographic mammography (CT/M) scanner, one of only two in the world, draws women from all over the country to KUMC for early diagnosis of breast cancer. According to C.H. Chang, M.D., the CT/M scanner was detecting tumors at an accuracy rate of 97 percent.

1976: The Master's in Nursing outreach degree program is put in place in Hays, Salina, Garden City, and Pittsburg.

1977: Ron Harper, Ph.D, is appointed the first dean of the School of Allied Health.

1977: Richard A. Walsh, M.D., is appointed dean of the KU School of Medicine-Wichita.

1977: Daniel L. Azarnoff, M.D., distinguished professor of medicine and pharmacology, and director of the Clinical Pharmacology-Toxicology Center, is elected to the select membership of the Institute of Medicine, National Academy of Sciences.

January 4, 1978: Margaret Shandor Miles, RN, Ph.D., is named the first editor of the newsletter of the International Work Group on Death, Dying, and Bereavement.

January 1978: The Board of Directors of the National Association of Community Health Centers announces the establishment of the Samuel U. Rodgers Achievement Award. The award is created in honor of Dr. Rodgers' great personal contributions to the community health center movement.

January 1978: The first off-campus Nurse Practitioner Certificate Program in Kansas begins with funding by the Kansas Legislature to provide additional services for people in western Kansas. The program is taught at KU Medical Center's outreach facility in Hays.

1978: Lynn Ketchum, M.D., plastic surgeon, invents the Ketchum Dynamic Hand Splint, a device that repeatedly bends and straightens a patient's fingers to increase movement and prevent stiffness. The unique splint is manufactured by the Burnett Instrument Company of Lawrence, Kansas.

April 8, 1979: A Sagittaire 40 MEV linear accelerator, one of the most sophisticated machines ever designed for the treatment of cancer, is installed at the Mid-America Cancer Center at KU Medical Center. The new 40 MEV accelerator makes the cancer center one of the top 10 treatment centers in the United States.

May 18, 1979: Dedication of the new $58 million University of Kansas (Bell Memorial) Hospital is held.

1979: Sterling Williams, M.D., assistant professor of obstetrics and gynecology, with music therapists Michael Clark and Ronald McCorkle, develops the first formal program in the United States to use music therapy in the delivery room.

1979: The Kansas Regional Diabetes Education and Research Center at the KU School of Medicine-Wichita is chosen as one of three locations in the country where a prototype of an artificial pancreas was tested under the direction of Drs. Richard and Diane Guthrie.