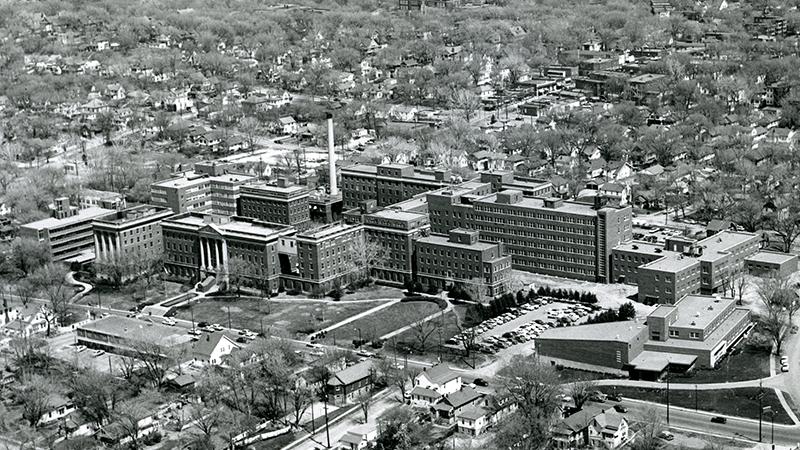 A 1956 aerial view of the University of Kansas Medical Center.

1960: W. Clarke Wescoe, M.D., is appointed chancellor of the University of Kansas.

1960: C. Arden Miller, M.D., is appointed provost and dean of the KU School of Medicine.

1960: Ruth Gordon, M.S., chair of dietetics and nutrition, establishes a unique program that combines the dietetic internship with a master's degree. This was one of the first such programs in the United States and was the first to offer students the opportunity to specialize in Hospital Dietary Administration or Nutrition and Dietetics.

1960: David S. Ruhe, M.D., professor of public health and preventive medicine and director of the Audio-Visual Department, receives the Combined Royal Colleges Bronze Medal given by the medical group of the Royal Photographic Society in London for his contributions to medical communications.

1960: The World Federation of Neurology establishes one of two secretariats for its International Commission on Comparative Neuro-Anatomy at KUMC, under the direction of Howard A. Matzke, Ph.D., professor of anatomy.  The other secretariat is established in Giessen, Germany.

1961: The RN-to-BSN completion program is established.

June 26, 1962: In a one and one-half hour surgery at KU Medical Center, the first pacemaker in the Midwest is successfully installed in a patient.

1962: The first-year medical class moves to KU Medical Center, ending 57 years of a divided campus for the School of Medicine.

1962: Hughes W. Day, M.D., (M'39), originates the concept of an acute coronary care unit for heart patients and establishes the first such unit in the world at Bethany Medical Center. Dr. Day and his colleagues also develop the cardiac "crash cart" and the term "code blue." The unit's success depended on the use of a highly trained physician-coronary nurse team to effectively lower the mortality rate from acute transmural myocardial infarction.

August 2, 1963: Cornelius Neufeld, RN, becomes the first male graduate of the Department of Nursing Education in its 57 years of existence.

1963: Marguerite Coffman, M.D., is appointed acting chair of the Department of Nursing Education.

1963: The Clinical Research Center is dedicated with Robert E. Bolinger, M.D., as director, and Paul R. Schloerb, M.D., as assistant director. The special 10-bed unit provides the first facility for the detailed and controlled study of hospitalized patients at KU Medical Center.

1964: Martha Pitel, RN, Ph.D., is appointed chair of the Department of Nursing Education.

1964: William P. Williamson, M.D., professor of neurosurgery, coordinates the School of Medicine course "Medicine and Religion," the first such course in the United States.

June, 1965: Esther Winkleman, M.D., (M'35), is named "Family Physician of the Year" by the Kansas City Academy of General Practice.

July 1, 1965: The KU Department of Anesthesiology is created.

July 1, 1965: The first Nurse Scientist Training Grant in the Midwest is awarded to KU Medical Center from the U.S. Department of Health, Education, and Welfare's Public Health Service.

October 26, 1965: The first post-graduate course in "Medicine and Religion" is launched.

1966: John Higginson, M.D., professor of pathology, is appointed to establish a new international agency for cancer research. The center, to be located in Lyon, France, is operated under the auspices of the World Health Organization.

1966: The Nurse Anesthesia Education program is launched by the Department of Anesthesiology.

1966: George A. Wolf, M.D., is appointed provost and dean of the KU School of Medicine.

October 12, 1967: Samuel U. Rodgers, M.D., associate professor of obstetrics and gynecology at KU Medical Center, is named the director of the Wayne Miner Health Center, one of the first federally funded neighborhood health centers in the nation

1967: Norge Jerome, Ph.D., professor of preventive medicine, is the first person in the world to become a nutritional anthropologist.

1967: Ronald M. Lauer, M.D., pediatric cardiologist at KU Medical Center, in cooperation with the Midwest Research Institute, uses NASA space equipment to develop the Respirometer. The device, fashioned from an astronaut's helmet and body sensors to measure oxygen consumption, is later used in studies that determined exercise limitations of normal children, indicated the seriousness of handicap in diseased children, and measured the effectiveness of treatment in improving disease conditions.

1967: Former KUMC faculty member E. Grey Dimond, M.D., leads the effort to establish the University of Missouri-Kansas City School of Medicine, one of the first medical schools in the United States to offer a six-year program for high school graduates.

1967: Under the directorship of Charles E. Lewis, M.D., chair of the Department of Preventive Medicine and coordinator of the Kansas Regional Medical Program, a KU Medical Center-affiliated health education program is opened at the Central Kansas Medical Center in Great Bend, Kansas.

1968: Under the direction of Martha Pitel, RN, Ph.D., the master's degree in nursing program begins. This was the first such program in Kansas and is focused on preparing clinical specialists in the area of psychiatric nursing.

1968: Joe R. Kimmel, M.D., professor of biochemistry, is the first to identify a new peptide hormone of the pancreas called pancreatic polypeptide.

1968: The KU Medical Center radiography program is accredited by the American Medical Association.

1968: The Department of Biometry is formed as a response to the growing importance of biostatistics and computer science in research.

January 1969: Patricia Schloesser, M.D., director of the Division of Maternal and Child Health, Kansas State Department of Health and KUMC clinical associate professor of Human Ecology, receives the National Cystic Fibrosis Foundation Service Award for her outstanding contributions to the cause of saving the lives of children afflicted with the disease.

November 1969: Jean A. Yokes, RN, MSN, assistant professor of nursing education in the Department of Nursing and coordinator for the Coronary Care Program of the Kansas Regional Medical Center, is the first nurse in the nation to be accepted into the American Heart Association's Council on Cardiovascular Nursing.

1969: Mahlon Delp, M.D., becomes the first Kansas physician to be named a Master of the American College of Physicians.

1969: Frederick F. Holmes, M.D., creates the Cancer Data Service, a registry for cancer patients in the state of Kansas, which is active to the present time.

1969: The Kansas Legislature and Board of Regents vote approval to develop a Department of Family Practice at KU Medical Center.