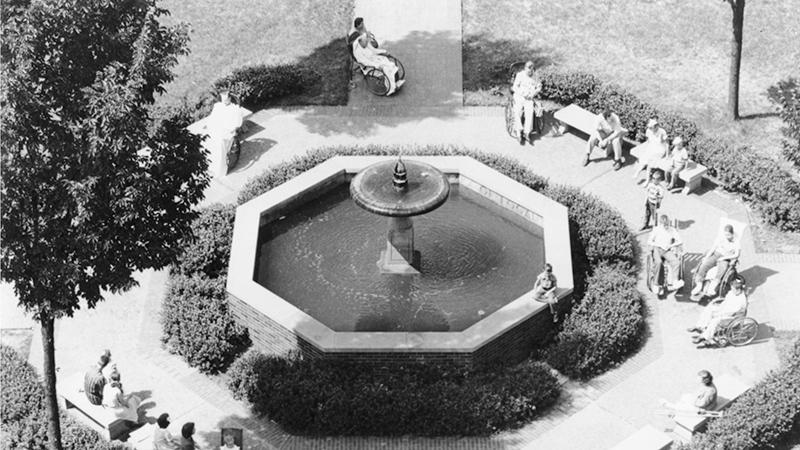 A summer scene at the Clendening Fountain in the 1950s.

1950: Kurt R. Reismann, M.D., professor of medicine from 1951 to 1980, is the first scientist in the world to show there is a humoral substance, erythropoietin, that controls red blood cell production.

March 6, 1951: Creighton Hardin, M.D., (M'43), is the first vascular surgeon in the world to perform a successful abdominal aneurysm resection in a patient by using a cadaver homograft.

May 11, 1951: The first Russell Haden Award for student research is awarded to Jerome Grunt, a medical student.

July 1951: KU Medical Center personnel administer approximately 42,000 typhoid shots to victims of a catastrophic flood that inundated Kansas City. It is the greatest natural catastrophe in the recorded history of the region.

1951: Franklin D. Murphy, M.D., is appointed chancellor of the University of Kansas.

1951: Mahlon Delp, M.D., is appointed chair of the Department of Postgraduate Medical Education. Over the next 10 years, the program is generally acknowledged to be one of the best in the world, attracting observers from many foreign countries.

1951: Ernst Trier Mørch, M.D., invents a ventilator to assist respiration in surgical patients. During the 1951 polio epidemic, the device is used to assist patients whose breathing mechanisms were paralyzed, essentially replacing the "Iron Lung."

1951: Lawrence E. Lamb, M.D., a 1949 graduate of the KU School of Medicine, serves as resident physician in internal medicine at KUMC from 1950 to 1951.  Dr. Lamb becomes a pioneering physician in aerospace medicine in the United States, culminating his career as Chief, Aerospace Medical Sciences Division, United States Air Force School of Aerospace Medicine at Brooks Air Force Base, Texas. He also writes a nationally syndicated weekly health and medicine column, "The Doctor Says."

1952: W. Clarke Wescoe, M.D., is appointed dean and director of the KU School of Medicine.

1952: Edward H. Hashinger, M.D., founds and becomes the first chair of the Department of Gerontology, one of the first gerontology programs in the United States.

1952: Galen M. Tice, M.D., professor and chair in the Department of Radiology, participates in the formation of a Teletherapy Evaluation Board at the Oak Ridge Institute of Nuclear Studies in Oak Ridge, Tennessee. The board is formed to test new multi-curie radiation sources that had become available for the first time through the nation's atomic energy program, such as cesium, cobalt, and europium.

1952: The Department of Nursing Education receives temporary accreditation from the National League for Nursing.

1952: Christine Weems becomes the first African American woman to graduate from the Department of Nursing Education.

1952: Robert P. Hudson, M.D., (M'52), with Billie Jean Moore, originates the Jayhawker, MD, award. This award is presented annually by the students to the faculty member most dedicated to the primary objectives of the teaching of medical students.

1952: Rosemary Schrepfer, M.D., (M'47), is the first woman to complete a residency in obstetrics and gynecology, the first female OB-GYN specialist, and the first reproductive endocrinologist in Kansas City.

Fall 1953: The KU Medical Center Polio Laboratory, under Herbert Wenner, M.D., is chosen as one of 25 labs in the United States to participate in a large field trial of a vaccine developed by Jonas Salk, M.D.

June 4, 1954: The Student Union Building and Battenfeld Auditorium are dedicated.

May 18, 1956: By action of the Kansas Board of Regents, the second-year medical sciences building is named in honor of Harry R. Wahl, M.D., the longest serving dean in the history of KU Medical Center (1924-1948).

1956: The Department of Nursing Education celebrates its 50th anniversary.

May 25, 1958: The Children's Rehabilitation Center is dedicated. The new building has 28,500 square feet of classrooms, treatment rooms, play areas, and offices.

1958: Creighton Hardin, M.D., becomes the first surgeon in the Midwest to perform a kidney transplant.

1958: Ruth Steinberg Lambert, M.S., is appointed as the first KU Medical Center dietician whose research was devoted entirely to nutrition.

1958: E. Grey Dimond, M.D., and his associates develop a transistor for the transmission of electrocardiograms by telephone. Using a standard heart-sound microphone, heart tones and murmurs could be transmitted over standard telephone lines with excellent quality.

September 14, 1959: Ground is broken for the new U.S. Public Health Service's Communicable Disease Center. The building, named the Maurice Breidenthal Laboratory, is financed by the KU Endowment Association and leased to the federal government. It is initially used as an investigative center for research on diseases of fungal and viral origin.

1959: Stanley R. Friesen, M.D., Ph.D., professor of surgery and acting chair of surgery, becomes the first to elucidate the physiologic etiology and pathogenesis of congenital pyloric stenosis of infants. This condition causes excessive contractions of the valve between the stomach and the duodenum.