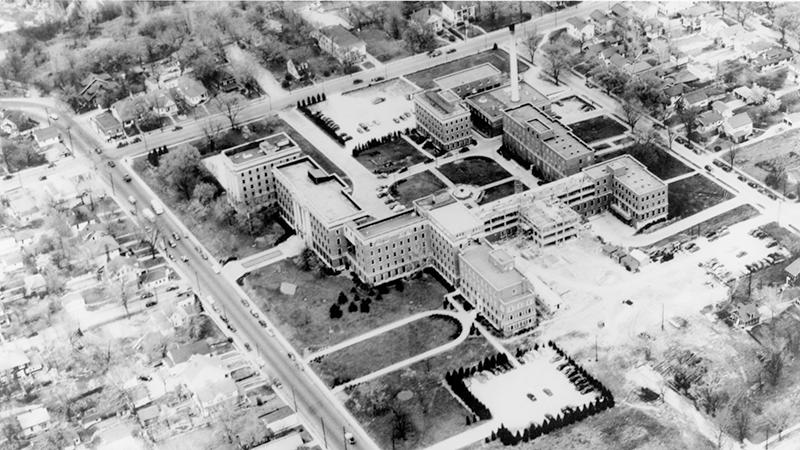 1940: Logan Clendening, M.D., becomes the first chair of the Department of History of Medicine.

1940: After the fall of the Pendergast political machine, Hugh L. Dwyer, M.D., professor of clinical pediatrics, is appointed the Kansas City, Missouri, Director of Health. Dwyer serves in that post for 26 years, the longest term in the city's history.

1940: Howard Scott Van Ordstrand, M.D., (M'35), founds the Department of Pulmonary Diseases at the Cleveland Clinic. Dr. Van Ordstrand was an international leader in the field of pulmonary disease.

1940: Frank R. Teachenor, M.D., is the first surgeon in the Kansas City area to be qualified by the American Board of Neurological Surgery.

1940: The occupational therapy program begins at KU-Lawrence and is housed in the School of Fine Arts, where it stays until 1978.

1941: Sara A. Patterson, RN, is appointed acting superintendent of nurses.

1941: As a result of World War II pressures, nursing students are finally allowed to be married.

1941: Edward Vernon Williams, M.D., of Ellsworth, Kansas, becomes the first African American to graduate from the KU School of Medicine. Prior to Williams' admittance at the insistence of Kansas Governor Walter Huxman, African American medical students had been denied entrance to the second two years of school and told that they would have to finish elsewhere.

May 10, 1942: The 77th Evacuation Hospital Unit, organized and led by Edward Hashinger, M.D., and consisting mostly of KU physicians and nurses, is officially activated for World War II. During the war, the unit serves in Africa and Europe and receives eight battle stars.

1942: Lewis Coriell, M.D., graduates from the KU School of Medicine. Dr. Coriell later discovers the first method to grow clean virus in human cells, thus creating the critical technology for the production of the polio vaccine.

1943: LaVerne B. Spake, M.D., is honored with the first Gold Key Award given by the American Academy of Ophthalmology and Otolaryngology.

1944: Thomas Grover Orr, M.D., first chairman of the Department of Surgery, authors Operations of General Surgery. Dr. Orr was considered the leading surgeon and authority on amputation in the Kansas City area during the 1930s and 1940s.

1945: Herbert C. Miller, M.D., is appointed chairman of pediatrics. He serves as chair for 27 years.

1945: Edward H. Hashinger, M.D., is appointed chair to the newly formed Department of Postgraduate Medical Education. Among the first programs to be developed in this department were the Circuit Courses, which were designated to bring medical education to doctors in small rural communities throughout Kansas.

1946: William F. Roth, Jr., M.D., is appointed as the first full-time chair of the Department of Psychiatry.

Franklin Murphy, M.D., dean of the School of Medicine and associate professor of medicine from 1948 to 1951

March 12, 1947: The first Bohan Lecture, "Pernicious Anemia: From Addison to Folic Acid," is given by Russell Haden, M.D. Internist Peter T. Bohan, M.D., one of the KU School of Medicine's most beloved teachers, served on the faculty from 1908 to 1946.

1947: The name "University of Kansas Medical Center" is officially adopted.

May 20, 1948: William C. Menninger, M.D., professor of clinical psychiatry, receives the French Legion of Honor Award for his wartime contributions to the mental health of the Allied Forces.

1948: The Hearing and Speech Department, under the direction of L.B. Spake, M.D., and tutelage of educational director June Miller, Ed.D., is established. The new department is initially sponsored by the Women's City Club of Kansas City, Missouri, the Carolyn Doughty Fund for Children and the Kansas City Alumnae Chapter of Kappa Kappa Gamma.

1948: Robert E. Stowell, M.D., professor and chair of the Department of Oncology and Pathology, establishes one of the premier cancer research programs in the nation at KU Medical Center.

1948: C.C. Nesselrode, M.D., (M'06), clinical professor of surgery, receives national recognition for his many years of untiring work for research and education in the field of oncology, when he is elected president of the American Cancer Society.

1948: Sam E. Roberts, M.D., professor of otolaryngology, devises improvements in detecting cancers of the larynx and vocal cords with the development of the "self-retaining, dual distal-lighted laryngoscope." The instrument was designed to eliminate the shadows and reflections encountered in the use of older, single-lighted laryngoscopes.

November 21, 1949: KU Medical Center becomes the first institution in the world to regularly employ the use of television in medical teaching.

1949: The baccalaureate degree in nursing is moved from the College of Liberal Arts to the KU School of Medicine.

1949: Kermit E. Krantz, M.D., future chair of OB/GYN at KUMC, along with Victor F. Marshall, M.D., and Andrew A. Marchetti, M.D., publishes "The Correction of Stress Incontinence by Simple Vesico-Urethal Suspension" (otherwise known as the MMK Operation) in Surgery, Gynecology, and Obstetrics.

Medical officers of the 77th Evacuation Hospital Unit on the front steps of Bell Memorial Hospital, 1942.
Student nurses in nutrition class, 1942
Guests at the dedication of the Clendening Memorial Fountain, April 17, 1947.
The 77th in Germany, 1944
Governor Frank Carlson signing the Rural Health Program for Kansas, February 18, 1949
KU School of Medicine