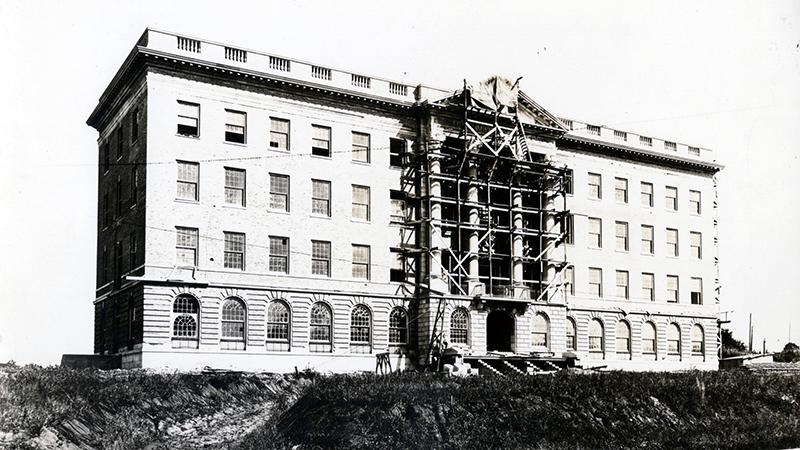 The new University of Kansas School of Medicine and Bell Memorial Hospital nearing completion in 1923.

1920: E.J. Curran, M.D., a pioneer in glaucoma surgery at KU, publishes an article in the Archives of Ophthalmology that first recognizes the pathophysiology behind relative pupillary block and the mechanism by which iridotomy, or incision of the iris, works.

1923: Ralph H. Major, M.D., chairman of the Department of Internal Medicine from 1921 to 1950, and chair of the History of Medicine Department from 1950 to 1954, is the first physician in the state of Kansas to use insulin in the treatment of diabetic coma.

1924: The KU School of Medicine and Bell Memorial Hospital relocate to a new site at 39th and Rainbow Boulevard in Kansas City, Kansas.

1924: Harry Roswell Wahl, M.D., is appointed dean of the KU School of Medicine. His term of 24 years stands as the longest tenure in the school's history.

1925: Andrew L. Skoog, M.D., a 1902 graduate of Northwestern Medical College, and KU School of Medicine faculty in neurology from 1908 to 1928, is the first specialist in mental diseases from KU to serve as an "alienist," or one who is paid to give expert testimony in criminal trials where a plea of insanity is offered by the defense.

1926: Thomas Grover Orr, M.D., professor and chair of surgery from 1924 to 1949, authors the monograph Modern Methods of Amputation (Surgery).

1926: The University of Kansas School of Medicine becomes a pioneer in medical technology when a centralized clinical laboratory is established.

1927: Henrietta Froehlke, RN, M.A., is appointed supervisor of nursing education. She is the first superintendent of nurses to hold a master's degree.

1927: The Circuit Courses, pioneering the concept of bringing continuing education programs to out-state practicing physicians, is launched. In its first year, the program offers courses at six different locations throughout the state.

1927: Logan Clendening, M.D., publishes The Human Body, the first popular medical book written for a broad audience, selling more than 500,000 copies. Also that year, he begins writing a daily medical advice column that is syndicated in 383 newspapers with a combined circulation of 25 million.

1928: Don Carlos Guffey, M.D., chair of the Department of Obstetrics and Gynecology, delivers Patrick Hemingway, the son of Ernest Hemingway and his second wife, Pauline Pfeiffer. The birth, which Hemingway witnesses, is the model for character Catherine Barkley's fatal delivery in A Farewell to Arms.

1928: The Department of Nursing Education moves into Hinch Hall on the Rainbow campus, and the first baccalaureate program in nursing in the state of Kansas is established.

1929: Leroy A. Calkins, M.D., is the first geographically full-time obstetrician and gynecologist at the KU School of Medicine and in the Kansas City area, and is the first obstetrics and gynecology department chair with extensive post-graduate training.

1929: The first obstetrics and gynecology resident at the KU School of Medicine is Thomas J. Sims, Jr., M.D.