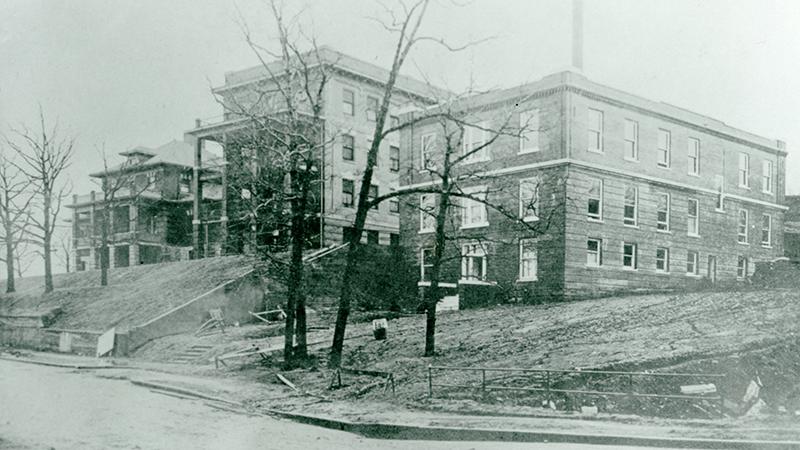 The completed Goat Hill campus of the University of Kansas School of Medicine, 1916.

1910: Minerva Wilson, RN, is appointed principal and lecturer of the KU Department of Nursing Education.

1910: William W. Duke, M.D., professor of experimental medicine and hematology, devises the "Duke Bleeding Time" test, which is still universally used, and establishes the fact that platelets are reduced in purpura.

1910: Abraham Flexner's report, Medical Education in the United States and Canada, done for the Carnegie Foundation, severely criticizes KU for having a divided medical campus between Lawrence and Rosedale.  Flexner writes that the facilities are so poor and the budget so inadequate that KU would "need to refrain from many other projects, pending the upbuilding of a credible school of medicine."

1911: Obstetrics and gynecology are combined into one department under the chairmanship of Don Carlos Guffey, M.D.

1911: Samuel J. Crumbine, M.D., one of the leading figures in public health during the early 20th century in the United States, is appointed dean of the School of Medicine.

1911: The first programs in postgraduate education begin as a cooperative venture between the KU School of Medicine and the Kansas State Board of Health.

1913: Lucius Elmer Sayre, Ph.M., dean of the School of Pharmacy, discovers that corn oil, a by-product of cereal making, is good for cooking. The discovery leads to the establishment of a large industry in North Kansas City, Missouri - the Corn Products Company.

1913: Isadore J. Wolf, M.D., KU professor of medicine from 1905 to 1939, is the first physician in the United States to advocate the use of digitalis in the treatment of high blood pressure.

1914: Ralph Major, M.D., is appointed the first full-time professor and chair of the Department of Pathology.

1914: E.J. Curran, M.D., a 1908 graduate of Harvard Medical School and a pioneer in the surgical treatment of glaucoma, is appointed the first professor and chair of the new Department of Ophthalmology.

January 1, 1916: Orval J. Cunningham, M.D., is appointed the first chief anesthesiologist in the state of Kansas, and associate professor of surgery at the KU School of Medicine. Dr. Cunningham develops the first hyperbaric oxygen tanks for therapy of numerous diseases including hypoxia, pneumonia, hypotension, diabetes, arthritis and syphilis.

1916: Franklin E. Murphy, M.D., becomes a founder of the Kansas City Clinical Association and serves as its first secretary.

1916: Richard L. Sutton, Sr., M.D., chair of dermatology from 1912 to 1936, publishes the dermatology classic, Diseases of the Skin, which is used worldwide as a textbook through 10 editions.

April 1, 1917: Under the leadership of KU physicians John F. Binnie and Lindsey Milne, Kansas City area doctors convene at the Christian Church Hospital to plan for a World War I military hospital, designated Base Hospital #28, to be sent from Kansas City to France.

1917: C.C. Nesselrode, M.D., 1906 KU School of Medicine graduate and professor of clinical surgery, is a co-founder and first president of the Kansas City, Kansas, Chamber of Commerce.

1917: Noble P. Sherwood, M.D., Ph.D., begins a long series of published papers on the Streptococcus germ, becoming a leading authority on the subject.

1918: Base Hospital #28, a 2500-bed military general hospital formed by Kansas City doctors and nurses, is mobilized in Limoges, France.

1919: The Nurses Alumnae Association is organized at the KU School of Medicine.

1919: Louis B. Gloyne, M.D., a 1918 graduate of the KU School of Medicine, becomes the first full-time director of the Kansas City, Kansas, Health Department. He is credited with the establishment of the ordinance that safeguarded the city's milk supply, development of the law requiring examination of food handlers, organization of the garbage disposal system, and creation of a public nurse office and clinic.

Medical Class of 1916
Students of the Department of Nursing Education, circa 1910
A medical school anatomy class, circa 1920
A laboratory assistant at work, circa 1920
The general laboratory for clinical pathology, circa 1918.
KU School of Medicine