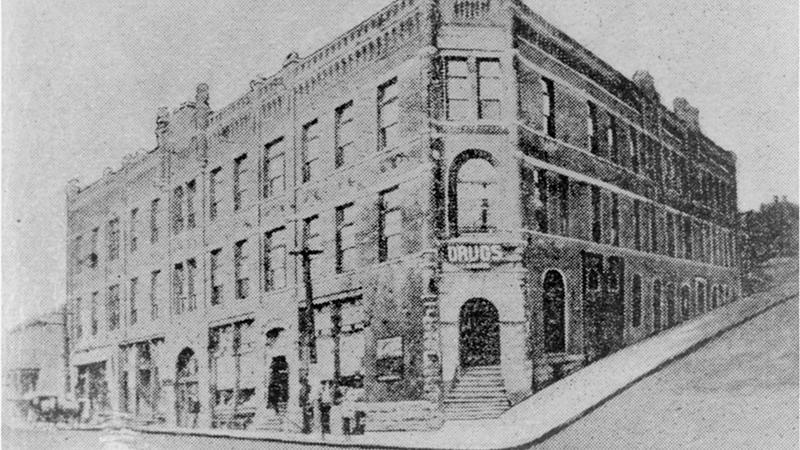 The Simpson Building at the corner of Simpson and Central Avenues in Kansas City, Kansas. Originally the site of the College of Physicians and Surgeons, this building was the first home of the new University of Kansas School of Medicine from 1905 to 1906. Enter caption heres.

The first graduating class of the Training School for Nurses, 1909.

1905: George Howard Hoxie, M.D., is appointed as the first dean of the KU School of Medicine.

1905: The first classes of the University of Kansas School of Medicine are taught in the Simpson Flatiron Building at 7th and Central in Kansas City, Kansas, the former site of the College of Physicians and Surgeons.

1905: John F. Binnie, M.D., School of Medicine surgeon from 1905 to 1911, publishes the Manual of Operative Surgery, which becomes a standard text in medical schools throughout the United States.

1906: The first sizable collection of books and journals at the KU School of Medicine is part of the 10,000-volume personal library of Arthur E. Hertzler, M.D., brought with him when he joined the faculty.

1906: The Department of Nursing Education, a three-year diploma program under the auspices of the KU School of Medicine, is founded by George Howard Hoxie, M.D.

1906: Pearl T. Laptad, RN, is appointed the first superintendent, principal and lecturer of the KU Training School for Nurses. She is also placed in charge of all nursing and housekeeping in the hospital, as well as all operation and curriculum of the training school.

1907: Samuel J. Crumbine, M.D., titular dean of the KU School of Medicine from 1911 to 1915, is selected as Secretary of the Kansas State Board of Health. During his tenure, Dr. Crumbine successfully abolishes the common drinking cup in public places and starts the "swat the fly" and "don't spit on the sidewalk" campaigns.

1908: Helen Cust, RN, is appointed principal and lecturer of the Department of Nursing Education after Laptad's resignation.

June 9, 1909: The Department of Nursing Education, founded by George Howard Hoxie, M.D., dean of the School of Medicine, in 1906, graduates its first class.

1909: C.B. Francisco, M.D., (M'07) returns to the KU School of Medicine as the city's first formally trained orthopedic surgeon after two years of training at the Hospital for Ruptured and Crippled Children in New York. He also serves as the first house officer for the 35-bed Bell Memorial Hospital.