Chemistry Hall on the Lawrence campus, circa 1890. 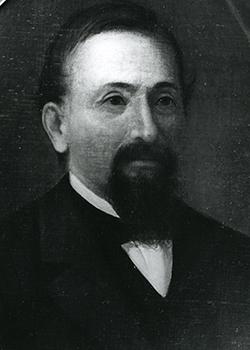 Originally founded in 1864, the University of Kansas instituted a one-year premedical course in 1880 with a curriculum that included chemistry, physiology, comparative anatomy, botany, toxicology, and materia medica. Many students completing this preliminary course were admitted to the second year of a three or four-year medical course at other universities.

In 1899, KU added an additional year of premedical school. The classes included anatomy, chemistry, materia medica, pharmacy, physiology, embryology, bacteriology, toxicology, medical jurisprudence, and psychology. With no university-level four-year medical school available in either Kansas or Missouri, many local proprietary schools offered degrees in medicine. Notable among those were the Kansas Medical College in Topeka, the College of Physicians and Surgeons in Kansas City, Kansas, and several in Kansas City, Missouri, including the Kansas City Medical College and the Medico-Chirurgical College.

In the years preceding the founding of the University of Kansas School of Medicine,a number of skilled and talented people who would later serve as founders and faculty members for the new school were making their marks in local medicine and science. In 1889, Isadore J. Wolf, M.D., future KU professor of medicine, became the first physician in the Kansas City area to introduce scientific medicine through the use of blood counts and differential studies, microscopic examination of sputa, use of the Widal Test, and the study of malaria.

In 1894, Kansas City, Kansas, physician and real estate entrepreneur Dr. Simeon Bishop Bell offered land and money for KU to develop a hospital and medical school in memory of his wife Eleanor Taylor Bell. His donation of 500 acres and $100,000 provided for the formation of a new University of Kansas School of Medicine in Rosedale, Kansas.

Walter Sutton, M.A., a KU School of Medicine surgeon from 1909-1916, received his graduate degree in biology from KU in 1901. Encouraged by his major professor to enroll in Columbia University for doctoral work, Sutton published his landmark paper, “The Chromosomes in Heredity,” based largely on the research he had done at KU. His paper postulated the chromosomal theory of heredity, now known as the Sutton-Boveri Hypothesis. Sutton’s theory stated that the chromosomes are the carriers of the genes for inheritance, and their behavior in meiosis is responsible for the phenomena of Mendelism.

In 1902, Arthur Hertzler, M.D., founded the Herztler Hospital in Halstead, Kansas, after the Mayo Model of group practice. Hertzler, ranked among the most accomplished surgical pathologists of his time, amassed more than 150,000 specimen slides during his career. He joined the KU School of Medicine faculty in 1909. Hertzler donated books to the school thus forming the nucleus of its medical library.

Finally, in 1904, Marshall Barber, M.A., local bacteriologist, developed a capillary micropipette that allowed for isolating a single bacterium. With this Barber proved that one anthrax bacterium could produce a fatal infection. Barber was on the School of Medicine faculty as professor of bacteriology and pathology from 1905-1911, when he left KU to take an appointment at the Rockefeller Institute in New York City.

These physicians and scientists, soon to be joined by others from around the country and abroad, represented the solid and innovative scientific foundation for the new University of Kansas School of Medicine in 1905.