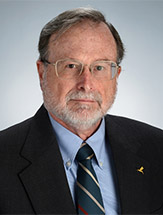 Dr. Vacek has held numerous academic positions, hospital staff appointments, and committee memberships throughout his career. He has served as an editorial consultant for several medical journals, and is on the editorial boards of the American Journal of Cardiology and PostGraduate Medicine. He has taught postgraduate courses on Cardiovascular Epidemiology.

Dr. Vacek has coauthored over 200 articles in the medical literature as well as over 210 abstracts presented at medical meetings, and several book chapters. He has partnered in the development of medical technology which lead to a U.S. patent and incorporation in modern cardiac arrhythmia management.

Dr. Vacek received the Legacy Award for professional achievement in Cardiovascular Medicine from the American College of Cardiology, Kansas Chapter, in 2016. He was the 2017 James Sullivan Visiting Professor at the Creighton University School of Medicine.

The majority of Dr. Vacek’s medical career has been spent with direct patient care, but the opportunity to participate in clinical research, and in particular to engage in the education and training of medical students, residents, and fellows, has provided rewarding and fulfilling professional highlights, most importantly in regards to the personal relationships developed as a medical educator and mentor.