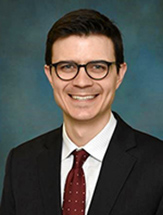 I grew up in the Kansas City area as the second of five children. A couple of my childhood friends had parents who were physicians, but other than that, no one in my world worked in the scientific field or even the more general academic field. I was involved in sports, theater, and music, but the fields of science and medicine were in a separate universe that I remained largely ignorant of through high school.

Despite my ignorance, I have always been curious about how the human body works and especially the human mind, and I love learning about other cultures. So, when I started at Kansas State University I was drawn to pre-medicine and science, and I decided to minor in Spanish. The courses were intellectually challenging as they covered things from the fundamental basis of how life functions in organic chemistry, to how all life on our planet is interconnected in environmental studies. But I was also intrigued to learn about how many questions in science are still unanswered. I had the opportunity to work in a lab at the veterinary college on campus starting my sophomore year, and it was at that time that I first began to see how my curiosity and drive could be used to potentially impact medicine through scientific study.

So, as these two tracks of medicine and science appeared separate and I didn't know which way I would choose to go, I stumbled upon the physician-scientist career track and realized I could do both! So that's what I did, starting the MD-PhD program in June 2010. After the first two years of medical school my clinical interests had narrowed some but I still wanted to keep my options open until I had more hands-on experience. So, I chose a lab for my PhD based on mentorship, my interest in the project, and the lab environment. I ended up in the lab of Steve Weinman MD, PhD, a Hepatologist physician-scientist, in the department of Microbiology, Molecular Genetics and Immunology. My project explored the role of the human transcription factor, FOXO3, in the pathogenesis and sensitivity to chemotherapy of hepatocellular carcinoma. It was a tough transition from medical school to graduate school and it took a while for my project to take off but thankfully and with a lot of great mentorship from my P.I., the program director, Dr. Fields, and many others, it finally did, and I completed my PhD in 2016. I then rejoined the medical school and through completing my clerkships I came to realize my passion for working with and promoting good mental health in kids.

Beyond education/career, I am married to my high-school sweet-heart, Emilie, who is an occupational therapist. I relax after work by reading, spending time outside, or watching a good movie.