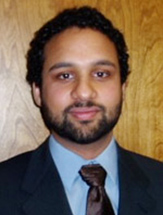 I was born in Manhattan, Kansas, where my father is a scientist who heads the Wheat Genetics Resource Center at Kansas State University. Growing up, I had only a very nebulous concept of what was entailed in scientific conferences that my father attended - mostly they were a black box labeled "Science Talk." As I got more into biology and research I had a clearer concept that new knowledge must be constantly disseminated. When I attended my first scientific conferenece - the 44th Annual Midwest Regional Developmental Biology Meeting, at the Stowers Institute for Medical Research - I was struck by the real sense of community that existed among the researchers and the high level of discussion that took place after the talks, not to mention in the hallway or over dinner. I realized that the scientific community was a living, growing and changing group with enlivened and passionate discussion.

In 2005, I graduated from the University of Kansas with a BA in French Language and Literature and a BS in Biology. Early on at KU, I was able to study Western Civilization, European History and Art History for a semester split between Paris and Florence, and this helped my decision to follow French as a major. I spent the last two and half years at KU in what proved to be the most important experience of my undergraduate education - learning and doing molecular neuroscience research with Dr. Erik Lundquist. The lab was interested in parsing the complex parallel and redundant molecular pathways needed for axons to find their targets.

Since the summer of 2005 and until entering the Kansas MD/PhD Program in 2007, I was a full time Research Assistant in the Developmental Genetics Program at Skirball Institute of Biomolecular Mediciine at the NYU School of Medicine. Dr. Jeremy Nance was the PI on the grant to characterize genes regulating the embryonic cell movements of gastrulation. We were interested in how cells in the early embryo first develop apical-basal polarity, and we used the model of the nematode C. elegans.

I enjoy the piano, improving my German proficiency, both of which I started while in New York for two years. I also spend four years on the KU Ultimate Frisbee Club that was a lifetime opportunity that I cherish to this day as a unified effort that led to qualification for the national tournament in Seattle.