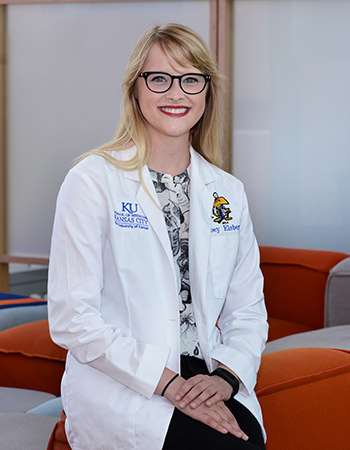 KU School of Medicine student Abbey Elsbernd (pictured left) is one of seven University of Kansas students who were named Fulbright Scholars for the 2017-2018 school year. She was admitted to the University of Copenhagen as a Fulbright Scholar. Elsbernd will research how a special oncology ward designed specifically for adolescents and young adults at Rigshospitalet, one of Denmark's largest hospitals, benefits those patients and how it can be improved. Ultimately, Elsbernd would like to see her work used to create a framework to develop similar oncology units in the United States and elsewhere.

The University of Kansas Medical Center has named four long-time faculty members University Distinguished Professors, which is an honor reserved for faculty who have made significant and sustained contributions to research, scholarship and teaching at the medical center.

Roy Jensen, M.D., professor of pathology and laboratory medicine and director of the KU Cancer Center, has been appointed as a member of the Project ECHO Cancer Advisory Board. In this role, Jensen will provide input, advice and guidance regarding the expansion of the ECHO (Extension for Community Healthcare Outcomes) model to address disparities in cancer care.

Robert D. Simari, M.D., executive vice chancellor of KU Medical Center and executive dean of the KU School of Medicine, has been selected to serve as a member of the Liaison Committee on Medical Education (LCME) for the 2018-19 academic year. The LCME is the U.S. Department of Education-recognized accrediting body for programs leading to the M.D. degree in the United States. It is jointly sponsored by the Association of American Medical Colleges and the American Medical Association.

Belinda Vail, M.D., M.S., professor of family medicine, has been named chair and clinical service chief of the Department of Family Medicine retroactively effective Jan. 1, 2018. Vail transitions to this permanent role after serving as interim chair since Nov. 1, 2016. After completing medical school and residency at the University of Kansas, Vail joined the Department of Family Medicine faculty in 1990. She has led the department in multiple roles during her tenure. Vail has received several distinguished teaching awards, including the Ruth Bohan Teaching Professorship, the most prestigious teaching award in the School of Medicine, and the Rainbow Award that recognizes outstanding attributes of professionalism and excellence in medicine. In addition to teaching medical students and residents, Vail serves as a mentor to many learners and junior faculty across the institution.

Xiaogang Li, Ph.D., professor of internal medicine, biochemistry and molecular biology, was one of five faculty members at the University of Kansas who received a 2018 University Scholarly Achievement Awards recognizing significant scholarly or research achievements for scholars in the middle of their careers. Li has been on the faculty at KU Medical Center since 2012. His research discoveries have made significant contributions in the field of polycystic kidney disease (PKD). This medical condition is the most common life-threatening genetic disease in adults.

Inamul Haque, Ph.D., a senior scientist in the Department of Pathology and Laboratory Medicine, has been awarded a $35,000 Institutional Research Grant by the American Cancer Society to help support his pilot project, “The role of miRNAs in development of resistance in non-small cell lung cancer.” Haque plans to study microRNAs (miRNAs), which are short single-stranded non-coding RNAs that regulate gene expression and repression in target genes. He hopes this research will lead to the discovery of novel therapeutic approaches for the treatment of lung cancer.