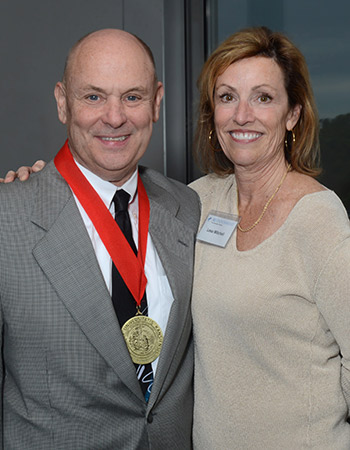 Scott Weir, PharmD, Ph.D., professor of pharmacology, toxicology and therapeutics, director of the Institute for Advancing Medical Innovation (IAMI), and associate director for translational research at The University of Kansas Cancer Center, was formally invested as the Kelly Family Foundation IAMI Professorship in Cancer Drug Discovery and Development. He is the first recipient of this new endowed professorship.

Randolph Nudo, Ph.D., the Marion Merrell Dow Distinguished Professor in Aging and professor and vice chairman of research in the Department of Rehabilitation Medicine, was named a recipient of the prestigious Higuchi-KU Endowment Research Achievement Award. The awards recognize exceptional long-term research accomplishments of faculty at Kansas Board of Regents universities.

Robert Freelove, M.D., a 2000 graduate of the KU School of Medicine, was awarded the Kansas Humanitarian Award from the Kansas Academy of Family Physicians (KAFP). Freelove currently serves as chief executive officer and chief medical officer of Salina Family Healthcare Center. He also serves as assistant medical director of Hospice of Salina, deputy coroner for Saline County, team physician for Kansas Wesleyan University, and has been a member of the Salina Regional Health Center board of trustees for six years. The Kansas Humanitarian Award honors “extraordinary and enduring humanitarian efforts and encourages KAFP members, their families and colleagues to assume a sense of global responsibility and to encourage service to others.”

Kansas Governor Sam Brownback and Lieutenant Governor Jeff Colyer named Luther Fry, M.D., a 1967 graduate of the KU School of Medicine, a Humanitarian of the Year. Fry is a Garden City ophthalmologist who has provided extensive charity care, ensuring none of his patients have been denied eye care because of their inability to pay.

Kellyann Jones-Jamtgaard, a graduate student in microbiology, was a recipient of the Christine Mirzayan Science and Technology Policy Graduate Fellowship Program. The fellowship educates participants on science and technology policy and the role that scientists and engineers play in advising the nation.

Promising research into treatments for head and neck cancer has led to two awards for a doctor of medicine-doctor of philosophy candidate at the KU School of Medicine. Jacob New, from Overland Park, Kansas, received both the KU Medical Center and the BioKansas Awards at the 14th Annual Capitol Graduate Research Summit in Topeka on March. New and his colleagues have had promising results in reducing cancer growth in the lab when using the standard of care therapy in combination with autophagy inhibitors. New was one of five students from KU Medical Center who presented their research at the event, which takes place annually to emphasize the role graduate students' research plays at the Kansas Board of Regents institutions.

Vanessa Armendariz and Matthew L. Moreno, both current students at the KU School of Medicine, are recipients of American Medical Association’s Foundation Excellence in Medicine Minority Scholars Awards. Armendariz is also the 2017 National Business Group on Health Ronald M. David, MD Memorial Scholarship recipient. Armendariz is a second-year medical student who is passionate about public health and primary care. Her interests include working with youth and underserved communities while confronting health care disparities. Moreno is a fourth-year medical student who plans to pursue a career serving underrepresented communities. The awards were given as part of the AMAF Excellence in Medicine Awards program on June 9, 2017, during the AMA annual meeting in Chicago.