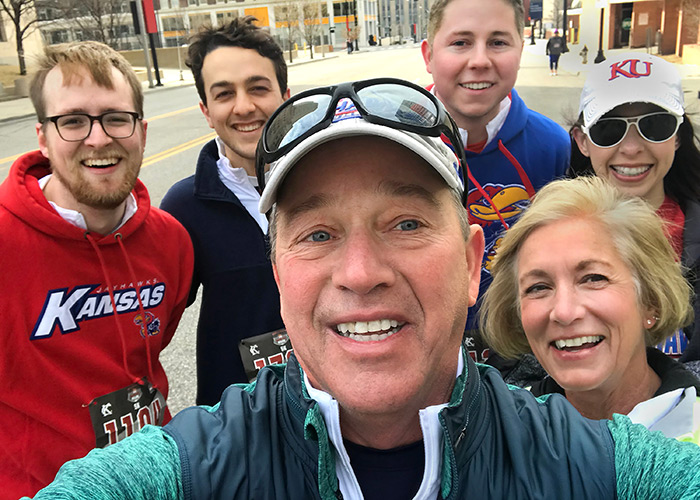 When Dave Houchin toed the starting line for Kansas City’s Big 12 Run in March 2018, his emotions were much different from a year earlier when three perfect strangers stepped in and saved his life after suffering a near-fatal heart attack during the event.

Those three Good Samaritans turned out to be second-year students from the University of Kansas School of Medicine, who just happened to come upon Houchin moments after he had crumpled to the ground without warning while his son, Regan, was running alongside. Needless to say, it was a life-changing event on many fronts for Houchin, who walked this year’s race route in celebration along with his son, wife and the three medical students.

“The race itself was fantastic,” said Houchin. “We had a ball talking about life, laughing, reminiscing, breathing deep and becoming even closer friends. I feel so blessed that God has me here for a reason. I am just so blessed.”

To this day, Houchin calls the medical students who saved his life last year his angels, but Sebastian Schoneich, Kelly Lembke and Dakota Bunch say they were just doing what any of their KU School of Medicine classmates would have done in the same situation.

When dawn broke on race day in 2017, it was a bitter cold with temperatures in the low 20s and snow falling. And although the three classmates were second-guessing their decision to run the event through downtown Kansas City, Schoneich and Bunch didn’t want their friend, Lembke, to have to endure her first 5K race alone, so they agreed to hang together during the race, which turned out to be fortunate for Houchin.

“It was freezing,” said Lembke, who started training a few months earlier with the goal of running her first 5K. “I didn’t really want to go that day. I was trying to find some excuse not to run, but obviously I’m glad I did.”

Houchin, who was 58 on race day, had always been an athlete. He played soccer and basketball at Faith Bible Baptist College in Iowa, but turned to running at around age 30 when nagging injuries kept forcing him to the sidelines. He ran his first marathon, the San Francisco Marathon, at 49, and a year later completed the Marine Corps Marathon in Washington D.C.

Houchin’s memories of race day 2017, however, are limited. He remembers watching KU play basketball in the Big 12 Tournament the night before and stopping for coffee and gas at the HyVee in Lenexa with his wife and son that morning. The next thing he remembers is waking up Monday morning in a room at Truman Medical Center.

“We started out at a normal pace for the first half mile of so,” remembers Regan Houchin, who was at his father’s side throughout the race. “He started slowing, and then we were really crawling. I could tell he was tired.

“About two-and-a-half miles in he said ‘whoa, whoa’ and sank to his knees and rolled onto his back.”

Schoneich, Lembke and Bunch were in the final stages of the race when they saw police officers and runners huddled around a man in distress lying in the roadway. Fortunately, the three friends had just recertified in cardiopulmonary resuscitation (CPR) a few weeks earlier as a mandatory part of their training, so when they saw Houchin in trouble, their instincts kicked in.

“I veered off and asked if everything was all right,” said Schoneich, who remembers running up a hill just before seeing people start to gather around a runner who had fallen and was in the “rescue” position. “I felt for a pulse, and there was no pulse, so I knew we needed to start compressions.

“Looking back at doing CPR, it felt like I blacked out,” he continued. “I didn’t really know what was happening in my surroundings. I was just focusing on ‘what does this guy need? Does anybody else know how to do compressions? Has anybody called an ambulance?’”

By this time, Bunch and Lembke had slowed, and when they saw their friend start chest compressions, they sprinted back and prepared to take turns doing CPR.

“My son said both students were good, but Kelly (a former EMT) really got after it,” said Houchin. “My artery was apparently 99 percent blocked. It wasn’t 100 percent blocked, but I’m guessing the compressions loosened things up just enough so that I was getting something.”

“I was a lifeguard for a long time, so I had run through this scenario a million times in my head,” Schoneich said. “There was a lot of adrenaline rushing through my body because I thought, ‘this is a real situation.’ As soon as I felt there was no pulse, I knew it was ‘go’ time.”

With the help of an area doctor, who had just finished the race, the students kept chest compressions going until emergency medical technicians arrived and transported Houchin to the hospital.

When emergency medical technicians arrived after being caught in race-day traffic, they shocked Houchin’s heart three times trying to restore a rhythm before whisking him away to Truman Medical Center where doctors inserted a stent in his heart. It wasn’t until days later, however, that Houchin learned the identities of his Good Samaritans.

Cardiologists told Houchin that he had dislodged soft plaque in his veins that lodged in his left anterior descending artery. The combination of the cold weather and being out of shape may have provided the perfect storm that resulted in the blockage.

“I’m eternally grateful to those guys,” Houchin said. “Probably, at best, without them I’d be about half the person I am today physically and mentally. Because of them, I was probably without oxygen for only about 30 seconds. I’ve got three angels there.”

Unsung heroes and the road to recovery

Meanwhile, the three students finished the race under a cloud of melancholy. As they sat drinking what should have been a celebratory post-race beer, they couldn’t help but wonder what had happened to the man?

In the days following the race, they couldn’t let go of their thoughts about the man they had labored so hard to save. Lembke Googled combinations of Big 12, 5K, CPR and heart attack before finally finding a television news story about the incident. Early the next week, the three tracked Houchin down at Truman Medical Center and made a surprise visit.

“It was very emotional,” Lembke said. “His wife and family were there. Everyone was crying. It was really gratifying to see all our hard work pay off. To have an actual impact on someone’s life was really amazing.”

Fast forward six months and Houchin was back fulltime at his consulting job. With his doctor’s permission, he runs frequently but wears a heart-rate monitor to ensure he isn’t pushing too hard. In September, Houchin invited everyone involved in his rescue to his birthday party. Bunch, Lembke and Schoneich found time in their busy medical student schedules to attend.

“Mr. Houchin’s story is pretty incredible,” Bunch added. “It shows how big of an impact you can have on someone’s life just by knowing something as basic as CPR.”

Race day 2018 again broke cold but there was no snow in the air, and this time no prompting was need because everyone was excited to meet up again under more cheerful circumstances. For various reasons, including lack of time for training, the entourage had agreed beforehand to walk together and enjoy the day. They even stopped along the way to snap selfies at the spot where they believe the incident happened, although with so much panic and adrenaline none of them remembers an exact location.

“It was joyous, emotional and a little surreal,” Schoneich said of the reunion at the race. “There was lots of laughter throughout the day. And this time the post-race beer was a happy one.”

For everyone involved, it has been a year of change, especially for Houchin, whose life has been altered on many levels. Physically, he’s well on his way to recovery. Emotionally, he has become even closer to friends and family and worries less about little things cares less about material possessions. Spiritually, he says his life was saved by “God working through perfect strangers, who were selfless, caring and loving.”

“The last year has been great,” Houchin continued. “I can’t put into words how much my wife, Nancy, has done for me and has been there for me. My son and I have a closer bond because of what we went through. And I have three wonderful new friends that literally saved my life.”