Andrea Nicol, M.D., M.Sc., assistant professor in the Department of Anesthesiology, is developing the first pain research program at the KU School of Medicine. 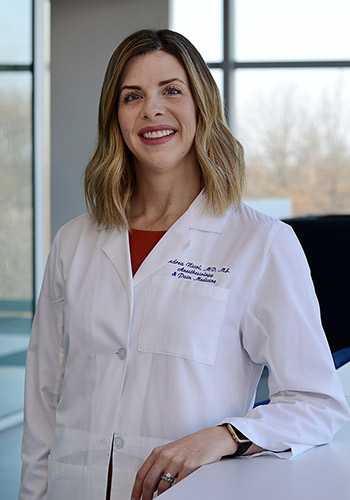 Nearly every week brings a new headline about the opioid crisis in the United States, and often a new staggering statistic. Americans make up 5 percent of the world's population yet consume at least 80 percent of these highly addictive drugs. Overdoses kill more people under the age of 50 than car accidents and gun violence and at a faster pace than the AIDS epidemic during its deadliest years. Meanwhile, an estimated 2 million Americans are dependent on opioids, putting them at risk to become part of the body count.

Many came by their addiction innocently: they had surgery, or an injury, or a chronic pain condition such as arthritis or migraines, and their doctor prescribed an opioid such as oxycodone and hydrocodone to ease their suffering. Experts say that a person can begin to become dependent on these prescription drugs in just a matter of days, but finding non-addictive medications that work as well as opioids is a challenge.

Last fall, Andrea Nicol, M.D., M.Sc., assistant professor in the Department of Anesthesiology at the University of Kansas Medical Center, published a review of the current research studies on alternatives to opioids used to treat non-cancer pain conditions, in the journal "Anesthesia & Analgesia." What she and her collaborators found was that although there is a slew of studies, there are not nearly enough that are blinded, randomized, and have large sample sizes. And the ones that were statistically significant technically were, well, not all that significant.

"The studies might have had statistical significance, but if you talked to patients and listened to what they said about how these alternatives [to opioids] affect their pain, it just wasn't that clinically meaningful," said Nicol. "We need better treatments, more funding, more research, all the things that provide evidence. To me, this is a call to arms."

Nicol came to KU Medical Center in 2013 to help answer that call. Her goal? To establish an interdisciplinary, large-scale pain research program in the Department of Anesthesiology — the first such pain research program at KU Medical Center. "Pain is something we've all experienced," she said. "And pain eats up tons of medical costs and also creates a lot of job loss. It's a majorly impactful issue."

All in your head

As a researcher who also treats pain patients, Nicol sees first-hand how so many people suffer from chronic pain — pain that accompanies conditions such as migraines and arthritis or that persists months after the body has healed from the injury or illness that caused it. And she knows that treating pain isn't just about prescribing medications; pain is a multifaceted experience that requires a multidisciplinary approach, utilizing physical, cognitive, stress management, and alternative therapies.

She specializes in centralized pain — pain that comes from abnormalities in the central nervous system, the most common form of which is fibromyalgia. (And to the notion that fibromyalgia is not a real disorder but "all in your head," she has this to say: "It is in your head: it's in the brain. People with fibromyalgia have elevated pain signals coming from their brain. It's that simple.")

Originally intending to be an anesthesiologist, Nicol, a graduate of the KU School of Medicine, became interested in pain medicine during a rotation during her residency at UCLA. There she got hooked on research when she participated in a study about chronic myofascial pain and completed a fellowship in pain medicine while earning a master of science in clinical research. She then accepted a faculty position at the UCLA Pain Management Center and treated pain patients while also working on two clinical trials for pain management. It was a good gig, but after she and her husband had their first child, they started thinking about returning to Kansas City to be closer to family.

Meanwhile, Talal Khan, M.D., professor and chair of the Department of Anesthesiology, who had come to the KU Medical Center in 2003 to run the clinical pain program, was thinking about adding a research program to the department. More and more, pain was recognized as a major public health problem. The annual yearly national cost of treating chronic pain, combined with the lost productivity pain causes, is estimated to top $600 billion, more than the yearly costs for heart disease, cancer, and diabetes combined. And then there are the emotional costs: being in continual pain can also isolate people who once led full lives, keeping them from doing things with family and friends, and ultimately lead to depression.

And yet, as Khan points out, pain medicine is a relatively new field. It was not until the 1950s that John Bonica, an anesthesiologist in the Army who treated many wounded World War II veterans, established pain as its own disorder and not just a symptom. There are still many unanswered questions about the science of pain.

"We were trying to understand why people had persistent chronic pain," said Khan. "I knew we needed to move more in the research direction. We had done clinical research in the department but we didn't have anyone trained specifically in research who was also a clinician. So, I was on the lookout."

Then in 2013, Nicol saw Khan at a conference in Minnesota. She introduced herself to Khan and told him about her research history and interest in returning to Kansas City. Khan was impressed with her credentials. Within a few months, Nicol was at KU Medical Center, where she spends one-quarter of her time treating pain patients, and the rest of her time focusing on research.

"She is unique because she is a clinician who has set out to be a researcher in pain medicine, and that is rare," said Khan. "There just aren't many pain clinicians who set their sights on becoming basic science researchers in their field."

This spring Nicol will begin enrolling patients in the first-ever study to examine the effects of centralized pain, including and especially fibromyalgia, on people who had lumbar spine surgery that failed to relieve their back pain.

Not only is this the first study on this subject, it is also the first research in the Department of Anesthesiology that is funded by a grant from the National Institutes of Health. Nicol is one of only of a handful of pain physicians in the country to receive a K23 grant, which supports the career development of investigators who are committed to doing patient-oriented research.

The study has enormous potential because back pain sends Americans to the doctor more often than any other condition. And of the hundreds of thousands of people who seek relief through spinal surgeries, between 10 and 40 percent will find themselves still suffering chronic pain after the procedure.

Meanwhile, several recent studies have shown that people who have undergone unsuccessful surgical procedures to relieve pain in other parts of the body, such as the knee and hip, share certain commonalities in their central nervous systems that predispose them to develop chronic pain after surgery. But despite the prevalence of failed back surgery syndrome, there had been not a single study to determine if centralized pain amplification, as it's called, is present in the many patients whose back surgery did not bring them relief.

"We're ultimately trying to reduce patients' risk for chronic pain after back surgery and even to help determine if they should have surgery at all," said Nicol. "The problem might be centralized pain — pain coming from how their brain processes pain signals, not pain coming from their back. Maybe we aren't always dealing with a spine problem."

If that's the case, it would establish a completely new avenue of research in this area, and with that, new possibilities for treatment and relief for thousands of patients.

Nicol was also awarded a Kansas IDeA Network of Biomedical Research Excellence (K-INBRE) Developmental Research Grant for her work with Kenneth McCarson, Ph.D., in the Department of Pharmacology, Toxicology and Therapeutics, to learn more about pain caused by burn injuries. The anesthesiology department also partnered with the Department of Preventive Medicine and Public Health to recruit a researcher, Andrew Roberts, who does large-scale database research on opioids. In addition to collaborating with neuroscience and pain researchers on campus, Nicol is also establishing relationships outside KU; for her back pain research, she is working with researchers at the University of Michigan who have looked at centralized pain and pain outcomes from knee surgery.

"I believe science works best as a team, and I want to develop a multi-site and multi-discipline collaboration to move the field forward," Nicol said. "We have a lot of treatments but they don't work for everyone. You can have 100 people with fibromyalgia, and they will respond differently to medications, just like not all spine pain patients are the same. Finding out why — these are all future studies."