A new home in Salina

A newly renovated campus for the KU Schools of Medicine and Nursing in Salina opened this summer.

The University of Kansas schools of Medicine and Nursing in Salina will have a little more elbow room this year as the two school’s combined campus moved into a significantly larger and newly renovated space in a former bank building in the city’s downtown.

The schools, which have shared a home in the Braddick Building on the Salina Regional Health Center grounds since last fall, pulled up roots in June 2018 and moved about a half-mile to the former Planter’s State Bank/Bank of America Building at 138 N. Santa Fe Ave. 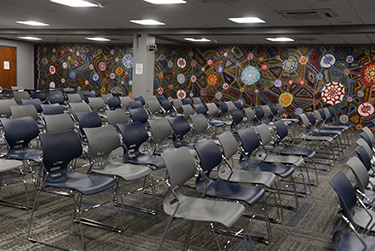 The program was created primarily to help meet the growing demand for doctors to work in rural areas, and the KU School of Nursing‒Salina began with a similar mission in mind in 2017 with a class of 12 enrolled for the fall semester. Plans call for the class size to continue to grow until 2022 when there will be 48 students completing the final two years of their Bachelor of Science in Nursing program on the Salina campus. If things go according to plan, William Cathcart-Rake, M.D., dean of the KU School of Medicine‒Salina, says that by fall semester 2021 a combined 80 nursing and medical students could be attending classes on the Salina campus. While physical space should not be an issue, plans for increasing the number of School of Medicine students in Salina remain under discussion. 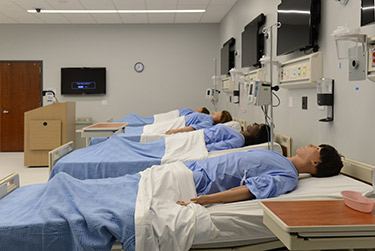 In May 2016, the Salina Regional Health Foundation purchased the bank building with the intent of moving the Salina campus. The foundation than began a $6.5 million capital campaign called the Blueprint for Rural Health to renovate, furnish and equip the facility and create an endowment for its maintenance.

Those entering the building via the Santa Fe Avenue entrance are welcomed by original artworks by Kansas artists and a state-of-the-art video board in the spacious lobby. Four individuals and two teams of artists, all from Kansas, were chosen to create original artworks for the building. Saralyn Reece Hardy, the Marilyn Stokstad Director of the Spencer Museum of Art at KU, guided the competitive selection process in which artists were asked to create works that reflect the mission of the Salina campus and/or its location. The artworks include a wall-mounted glass piece, four paintings, a large collage, a sculpture and a mixed-media piece. 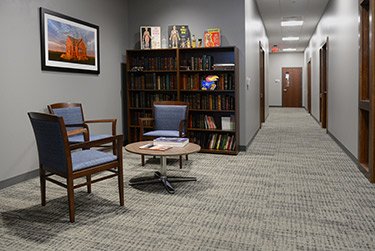 A clinical skills lab, a simulation lab, a procedural skills lab and exam rooms make up much of the rest of the first floor. One of the highlights is the former bank vault, which will be home to the School of Nursing offices.

The second floor is dedicated to learning and studying, with two nursing classrooms and four medical school classrooms, common study areas and a gross anatomy lab. The basement features a commercial kitchen and a community room big enough for large events. There is also a student lounge, fitness area and locker rooms with shower.