This year, Michael Sullivan became the fourth generation of his family to earn an M.D. from the KU School of Medicine. 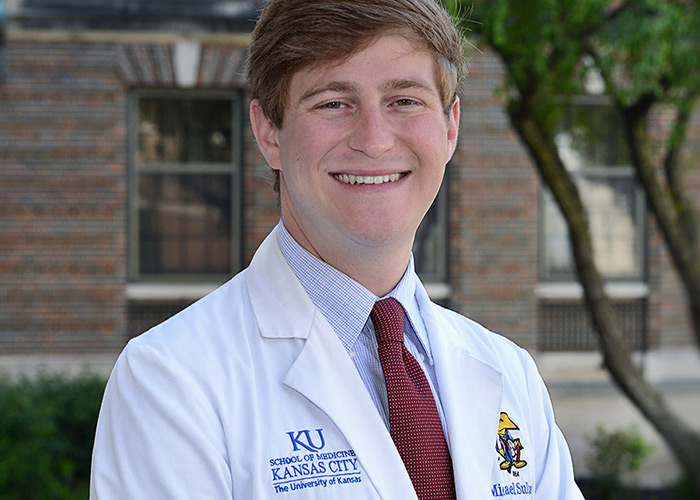 When Michael Sullivan walked across the stage and collected his diploma from the University of Kansas School of Medicine this past May, he became part of a family legacy of doctors that spans four generations and dates back nearly 100 years.

"I have wanted to be a doctor for a long time, starting at a young age," Sullivan said. "There was really never a moment in which I remember telling my family that I wanted to be a doctor. I am sure they were extremely proud though and very happy that I decided to continue the legacy."

The Sullivan family tree of medicine began with Mike's great grandfather, Henry Bradley Sullivan Sr., who grew up around Turon in central Kansas and spent time serving in World War I. The family patriarch earned his undergraduate degree from KU, and in 1920, he graduated from the KU School of Medicine before becoming a family medicine doctor in Shawnee, Kansas, where he practiced until the 1950s.

Next came Mike's grandfather, Henry Bradley Sullivan Jr., or "Papa," who graduated in 1952 from the KU School of Medicine after attending KU for his undergraduate degree. A private in World War II, Papa took over his father's family practice in Shawnee before retiring in 1996. He was an avid hunter, fisherman and golfer, and according to the family, "the biggest KU fan you'll ever meet."

Finally, there is Mike's father, Bradley Huse Sullivan who, after graduating from KU with a degree in microbiology, earned his diploma from the KU School of Medicine in 1979. He did his residency in obstetrics and gynecology at St. Luke's Hospital and has worked at Research Medical Center and Belton Regional Medical Center his entire career.

"Ever since my parents knew at an early age that I wanted to be a doctor, they have done their best not to influence me one way or another," Mike Sullivan said. "Looking back, I'm glad they did that, because it allowed me to choose what I wanted to do with my life. I knew if I wanted a different career path they would have supported me 100 percent."

The one possibly outlier in this predominantly Jayhawk symphony is Sullivan's mother, Sandy, who graduated from nursing school at the University of Missouri. His parents met while working as doctor and nurse in Kansas City, and over the years Sullivan's mother has come around to being a fan of the Crimson and Blue as well.

"We're all huge KU fans," Sullivan said of his family that includes brothers Patrick, 31, who teaches at J.C. Harmon High School, and Johnny, 29, who works for Baker Hughes in Texas; and sister, Megan, 25, a graduate of the KU School of Nursing, who works for The University of Kansas Hospital. "We like to joke that dad brainwashed all of us. My dad always tells the story that his father told him he was willing to pay for anywhere he wanted to go to college − as long as it was KU."

A graduate of Shawnee Mission East High School, Sullivan earned his undergraduate degree in biochemistry at KU in 2013 before enrolling at the KU School of Medicine. Going into family medicine seemed natural for Sullivan, who had admired the respect and appreciation people had for his father while growing up. But after a few surgical rotations at KU Medical Center, Sullivan realized a career in his father's chosen specialty was not in his future.

During his time at KU School of Medicine, many doctors influenced the younger Sullivan. But three individuals stand out in helping to refine his path to becoming an internal medicine practitioner. Lewis Satterwhite, M.D., assistant professor in the Department of Pulmonary and Critical Care Medicine, headed up Sullivan's problem-based learning sessions where students run through mock cases from the moment the patient presents with a medical condition until they are discharged. Satterwhite also sponsored Sullivan's work in the Intensive Care Unit during his first summer as a medical student.

Abebe Abebe, M.D., FACP, an assistant professor in the Department of Internal Medicine, was one of the first internal medicine doctors Sullivan trained with and was also a major influence.

"The first things that come to mind are his amazing physical exam skills, but he is so much more than that," Sullivan said. "Dr. Abebe is an amazing person who loves educating young doctors."

Finally, Matt Swan, an assistant professor in the Departments of Internal Medicine and Medical Oncology, was Sullivan's attending physician for three weeks during a sub-internship rotation.

"Several physicians have had a powerful impact on me, and I'd like to be able to do the same for future medical students and professionals."

"Dr. Swan's job is very challenging in that he is an internal medicine doctor who only works with cancer patients," Sullivan said. "Many of his patients can be in for simple infections, but many can be admitted for life-ending care. He has a fantastic sense of humor and can keep the mood light, but he knows how to turn serious when the situation is grim. He is straight-forward with his patients."

After finishing up his medical school obligations in the spring of 2017, Sullivan went on an international road trip backpacking his way across Southeast Asia. Sullivan and classmates Blaine Knox, Sida Niu and Scott Kristenson traveled to Thailand, Cambodia and Vietnam. Sullivan became a certified scuba diver in southern Thailand where he swam with sharks and sea turtles. Other highlights of the trip included taking part in Songkran, the Thai New Year's festival, and seeing the sunrise over Ankor Wat in Cambodia, the largest religious monument in the world.

"Ideally, I will be at an academic center," he said. "Several physicians have had a powerful impact on me, and I'd like to be able to do the same for future medical students and professionals."