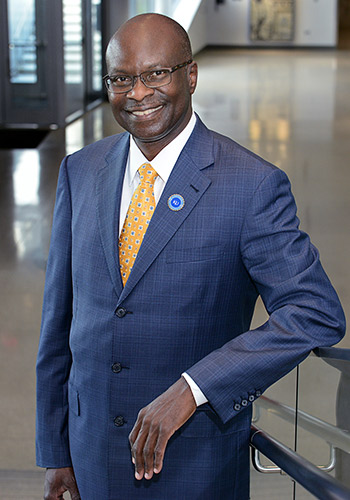 "We are pleased that Dr. Akinlolu Ojo will join us to lead the three campuses that make up the KU School of Medicine," said Robert D. Simari, M.D., executive vice chancellor for the University of Kansas Medical Center. "Dr. Ojo's diverse and rich background and experience in clinical care and research made him the ideal candidate to lead our medical school."

Ojo is currently associate vice president for clinical research and global health initiatives and professor of medicine and health promotion sciences for the University of Arizona in Tucson, Arizona. Board certified in nephrology, he also serves as an attending physician at Banner University Medical Center in Tucson and has clinical interests in chronic kidney disease, health disparities and kidney transplantation.

A national leader in research with more than $95 million in current grant funding and more than $200 million in total federal research grant awards during his career, Ojo is a member of the Food and Drug Administration Advisory Panel on Urologic and Gastrointestinal Devices and has been elected into the American Society of Clinical Investigation, the Association of American Physicians and the American Clinical and Climatological Association.

His primary research interests are in the clinical epidemiology and clinical and translational research in chronic kidney disease and kidney transplantation; minority health and health disparities; and global health. He has authored more than 200 peer-reviewed manuscripts.

"It a great privilege to serve as the next executive dean of the 15th-largest allopathic medical school in the nation and the only one in Kansas," Ojo said. "I look forward to joining hands with the entire KU Medical Center community to advance the important missions of the KU School of Medicine. I am confident that our concerted efforts and focused collaboration with numerous stakeholders will accelerate discoveries in precision medicine and population health that will improve the health and well-being of the people of the great state of Kansas."

Ojo replaces Simari, who was named executive vice chancellor in July 2017 and has continued to serve as executive dean while a national search took place.