See the progression of the Department of Dietetics and Nutrition from the ADA-approved dietetic internship program established in 1943 to the present day.

Dietetics and Nutrition, a department of KU School of Health Professions, is located on the University of Kansas Medical Center campus in Kansas City, Kansas. Here, students benefit from the opportunity to interact with a large number of health care professionals and leading researchers.

Our roots trace back to 1943, when the ADA-approved (American Dietetic Association, now the Academy of Nutrition and Dietetics) dietetic internship program began at KU with Ruth Gordon as its first department chair. 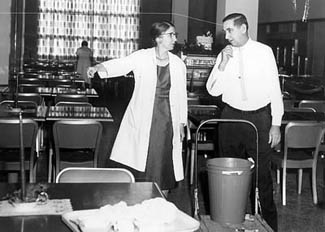 At right: Ruth Gordon, RD, was director and chair of the Department of Dietetics and Nutrition 1943-1972.

In 1962, the program began offering a combined internship-master's program.

In 1972, Elizabeth Frakes succeeded Gordon as department chair and the program became one of the charter members of the KU School of Allied Health (now renamed Health Professions) when it was formed in 1974. 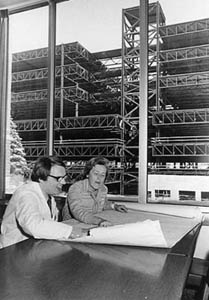 In 1987, Jim Halling, MS, RD, assumed the chair position and served until 1999 at which time Janice Harris, Ph.D., RD, was designated interim chair.

This was a time of great change on campus, as the university and hospital components separated for the first time and The University of Kansas Hospital became an independent organization.

In 2001 the dietetic internship became a graduate certificate program and a non-thesis option was approved for the master's program.

The Medical Nutrition Science Ph.D. program was established in 2010, followed by the opening of a Nutrition Clinic in 2011 and the beginning of the Dietetic and Integrative Medicine Graduate Certificate program in 2012. The Doctor of Clinical Nutrition was launched in 2020.

"I chose dietetics because I love nutrition and wellness, working with people, and understanding why things work the way they do. Dietetics is a great blend of science, critical thinking and creativity. "
- Bridget Cavuoti, Dietetic Internship Graduate Certificate '20, MS '21

We hope that you enjoyed your educational experience in the Department of Dietetics and Nutrition and that you increasingly value your KU education. We look forward to staying in touch with you.