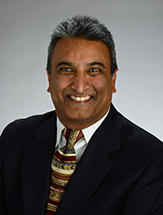 Rajesh Pahwa, M.D., is the Laverne and Joyce Rider Professor of Neurology, chief of the Parkinson's and Movement Disorder Division and director of Parkinson Foundation Center of Excellence at the University of Kansas Medical Center.

Dr. Pahwa received his M.B.B.S. (M.D.) degree at Seth G.S. Medical College, University of Bombay, India. He completed an internship in medicine at Baylor College of Medicine followed by a residency in Neurology at Baylor College of Medicine, Houston, Texas. He then completed a one-year fellowship in movement disorders at the University of Kansas Medical Center. Dr. Pahwa joined the faculty of the Department of Neurology as an instructor in 1992.

Dr. Pahwa was named the inaugural recipient of the Laverne and Joyce Rider Professorship in 2005. This professorship is named for the late Joyce Rider, a longtime Kansas City, Mo., resident, and for her mother, Laverne Stapp Rider, who battled Parkinson's disease for many years. Joyce Rider, who died in 2004, bequeathed financial support for the professorship to the University of Kansas Endowment Association.

Dr. Pahwa is a Diplomate of the American Board of Psychiatry and Neurology.
Additionally, the Parkinson’s Disease and Movement Disorders Clinic at The University of Kansas Health System is under Dr. Pahwa’s direction and offers diagnostic and treatment services for people with Parkinson's disease and related disorders such as progressive supranuclear palsy and multiple system atrophy as well as tremor disorders, primary essential tremor.