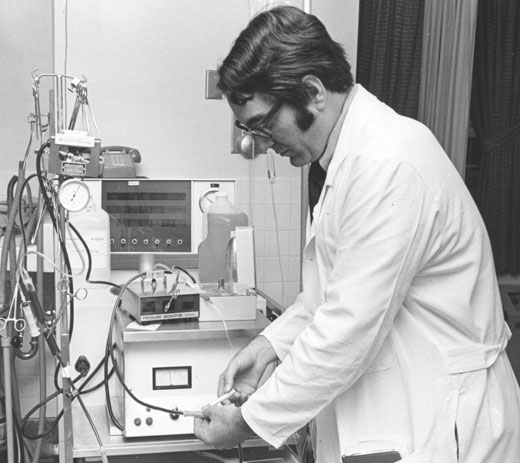 1958: Novel method devised to exchange fluid and electrolytes across the walls of an isolated segment of jejunum in a patient with renal insufficiency.
• Schloerb, P.R. The management of uremia by perfusion of an intestinal jejunal segment with observations of the dynamics of water and electrolyte exchange in the human jejunum. J. CIin. Invest. 37:1818-35

1982: Polycystic Kidney Research Foundation established in Kansas City. Dr. Jared Grantham (above) teamed with Mr. Joseph Bruening to create the Polycystic Kidney Research Foundation (PKRF), headquartered in Kansas City, MO. By 2008, the PKRF was responsible for directly funding more than $3 million in national and international grants and in influencing federal support for PKD research to the extent of an additional $35 million per year.

1986: Dr. Grantham elected Secretary-Treasurer of the American Society of Nephrology.

1989: The Journal of the American Society of Nephrology founded on this campus by Dr. Grantham and Dr. Sullivan. Upon completion of their editorial terms in 1996, the journal had the highest impact factor of over 30 world-wide titles in Nephrology and Urology.

1998: Dr. Vincent Gattone patented the invention of the use of vasopressin V2 receptor antagonists for treatment of polycystic kidney disease. Clinical trials of the first such agent, tolvaptan, are ongoing at KU and other centers.

1999: Doctors Grantham, Calvet, Robin Maser, Kenneth Peterson, Matthew Buechner and Xiangyi Lu were granted one of the Magnet Centers for Polycystic Kidney Research by the National Institutes of Diabetes, Digestive and Kidney Diseases. The Center grant was re-funded for an additional five years in 2004 under Dr. Calvet's directorship.

2000: The Kidney Institute received a grant from the National Institutes of Health for $1.9 million dollars, matched by another $1.9 million, for construction on the KUMC campus of research laboratories sufficient to house most of the principal investigators who work on kidney-related research problems.

2001: Dr. Hudson received a MERIT award from the National Institutes of Health. This prestigious award provided approximately a half-million dollars a year for research of kidney disease over a period of seven years.

2002: Dr. Dubose was elected to the Council of the American Society of Nephrology and later served as President.

2009: Dr. Grantham received the Jean Hamburger Award from the International Society of Nephrology.

2012: Results from the TEMPO 3:4 clinical trial were published in the NEJM, which showed that tolvaptan slowed the increase in total kidney volume and the decline in kidney function over a 3-year period in patients with ADPKD. KUMC was one of the clinical sites testing tolvaptan. Dr. Grantham was an author on this paper.

2018: Based on the results of the TEMP 3:4 trial and the subsequent REPRISE trial, the US Food and Drug Administration (FDA) approved Jynarque (tolvaptan) to slow kidney function decline in adults at risk of rapidly progressing ADPKD. Drs. Yu and Mustafa were authors on this paper summarizing the guidelines for tolvaptan use.

2021: Dr. Reena Rao patented the invention of the use of vasopressin V2 receptor antagonists for treatment of renal cell carcinoma.