Our laboratory studies the role of ion-transport proteins of the plasma membrane in cell function. Research is focused on the Na,K-ATPase.

The Na,K-ATPase or Na pump is an enzyme of the plasma membrane, that uses the free energy from the hydrolysis of ATP to transport cytoplasmic Na+ out of the cell in exchange for extracellular K+. The Na,K-ATPase is critical in maintaining cell volume and pH, the membrane excitability of muscle and nervous tissue, and plays a major role in the reabsorption of Na+ and water in the kidney. The transporter consists of different isozymes, each resulting from the association of distinct molecular forms of the alpha (alpha 1, alpha 2, alpha 3 and alpha 4) and beta (beta 1, beta 2 and beta 3) subunits that constitute the enzyme. While the alpha subunit is responsible for the catalytic and transport functions of the Na,K-ATPase, the beta polypeptide participates in the correct folding and targeting of the holoenzyme to the plasma membrane. Besides the alpha and beta isoforms, a third subunit, the gamma subunit forms part of the Na,K-ATPase. This polypeptide appears to be involved in the modulation of the enzymatic properties of the enzyme. 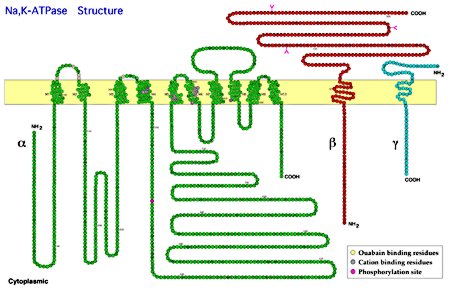 Studies are directed to understand the structure function of the Na,K-ATPase and the role of its various isozymes in the physiology of the cell. A variety of molecular and cellular biology methods are used to study these important enzymes, both in their native environment and after expression in cells in culture. Among the expression systems, we most usually use recombinant baculoviruses to direct the expression of the Na,K-ATPase and subunits alpha and beta in Sf-9 insect cells. This system has the advantage that Sf-9 cells contain very low levels of endogenous Na,K-ATPase, and allows the analysis of the expressed enzymes in an environment free from any major contaminating Na pump activity. We construct recombinant viruses containing wild type or mutated variants of the Na,K-ATPase isoforms and use them independently or in different combinations to study their function. Using this approach, we have determined that different isoforms of the Na,K-ATPase posses enzymatic properties that are unique. This suggests a specific role for the isoforms. While the ubiquitously expressed alpha 1 and beta 1 isozyme functions as the housekeeping Na,K-ATPase in the cell, the other isozymes mediate tissue-specific roles. Altogether, these studies are important to understand how cells are able to control water and ion balance under different physiological situations and during disease, where changes in Na pump isoform expression becomes altered. At present, we are particularly interested in the alpha 4 isoform, which is specifically expressed in rat spermatozoa. Experiments have been designed to elucidate the role of this Na,K-ATPase polypeptide in sperm function and its relevance to male fertility. Below, immunocytochemical photographs are show of the baculovirus directed expression of the rat Na pump alpha 4 isoform in Sf-9 cells and in the native environment of the rat testes. 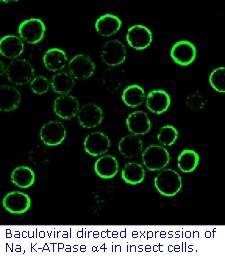 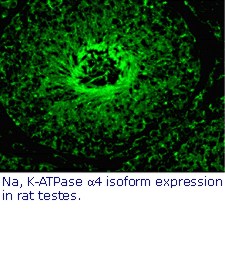 In addition, we are studying the role of the Na,K-ATPase in autosomal dominant polycystic kidney disease (ADPKD). ADPKD is characterized by the progressive enlargement of fluid filled cysts in the kidneys that compromise the function of the organ. We are studying the enzymatic function of the Na,K-ATPase in animal models of PKD and in renal epithelial cells from kidneys of patients with ADPKD. The morphology of normal and cystic kidneys from Han:SPRD rats is shown in the following figure.