In honor of Dr. Johnson's research career, the reproductive biology group at the University of Kansas Medical Center hosts an annual lecture in the Spring, the Donald C. Johnson Lecture in Reproduction.

"Ovulation: Emerging Concepts in the Human"

To donate to this event, please visit KUendowment.org/IRHRM 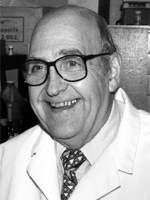 Known to many of his friends as "DC" or Don, Dr. Johnson was born January 30, 1927, in Black River Falls, Wisconsin, and spent most of his youth there. After graduation from high school in 1944, Dr. Johnson entered the U.S. Naval Reserve and served until 1952, with active duty in the Hospital Corps from 1944 to 1946 and 1951 to 1952. He was an astute biomedical scientist with a passion for trying to understand the physiology and biochemistry of the organs of the reproductive system of the body and their myriad interactions. It was this passion, broad scope of knowledge, and above all his total willingness to share his passion that brought so many of his research colleagues, students, and postdoctoral fellows to seek his thoughts and comments, which always resulted in stimulating conversation.

Dr. Johnson's formal training began in Zoology at the University of Wisconsin; he graduated in 1949, after which he earned a Master's degree in Zoology-Cytology in 1950. While a Research and Teaching Assistant for General Zoology and Embryology in the Department of Zoology at the University of Iowa, he received his Ph.D. degree in Zoology-Endocrinology in 1956 under the direction of Dr. Emil Witschi. For 7 years, he was a Research Assistant Professor in the Departments of Urology and Zoology at Iowa.

In 1963, Dr. Johnson was recruited to and spent the rest of his academic career in the Departments of Obstetrics & Gynecology and Molecular & Integrative Physiology at the University of Kansas Medical Center (KUMC). He rose through the academic ranks to Professor by 1969, and was appointed in 1978 as an Endowed Research Professor of Human Reproduction. He remained an active scientist and teacher as Professor Emeritus even after "retirement" in 1996.

During his academic career, Dr. Johnson produced more than 140 peer-reviewed research papers and provided research training and, importantly, nurturing guidance to 24 Ph.D. students and Post-doctoral fellows from around the country and world. He truly enjoyed teaching and the intellectual and personal interactions with students. He served on numerous editorial boards and study sections and was Assistant Editor of Biology of Reproduction in 1977.

Dr. Johnson was fascinated by everything and able to deeply question and investigate those fascinations. He constantly sought answers and was never overwhelmed by the additional questions those answers provided. He carried his naturally wondering spirit into all facets of his life; in his many rich personal relationships, his day-to-day maintenance of his and Eleanore's home and surroundings as well as in his professional life. Dr. Johnson passed away on October 14, 2004.