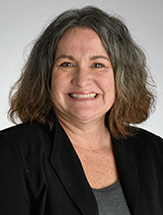 An associate professor, she is leading the development and implementation of the graduate-level program previously offered by the university as a bachelor's degree on the Lawrence campus. Taylor joined KU in spring 2020 after leading the program at Texas Tech University Health Sciences Center.

Professional Background
From 2000-2020, Taylor was a faculty member at Texas Tech University Health Sciences Center, Lubbock, Texas. While there she led the effort to develop a master's degree program in athletic training and served as its first program director. At that time, it was the first program of its kind to be offered at a health sciences center and only the sixth professional master's degree in the country.

Taylor has worked clinically in athletic training at the collegiate and high school levels, in the private sector, as well as for international tennis organizations. She is frequently hired as a consultant in her field of expertise.

Taylor served on the Commission on Accreditation of Athletic Training Education from 2013-2020 and president of the organization from 2017-2019. In addition, she served as a site visitor, on the review committee, and several other committees for the commission. Other previous service includes the exam development committee with the Board of Certification, Inc. She has been active with the National Athletic Trainers' Association, as well.

Taylor's scholarship interests include diversity, equity, and inclusion, unconscious bias, program development, and leadership (especially development of women leaders). She is a member of the Association for Athletic Training Education Research Network which serves to guide education research in the profession.

She also serves as manuscript reviewer for the Journal of Allied Health and as editorial board member for the Athletic Training Education Journal.