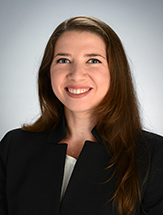 Lori Spoozak, MD, MHS, FACOG, FACS is deeply committed to leveraging her privilege as a physician to serve women and to promote women’s health, whether it is in her clinical practice, as an educator, as a researcher or in my administrative and leadership roles. In her clinical practice, she is a gynecologic oncologist and palliative medicine physician. She completed a second fellowship in Hospice and Palliative Medicine because of the severe distress she witnessed in women undergoing treatment for gynecologic cancer. It became her goal to provide high quality clinical care to women with gynecologic cancers throughout the trajectory of their illness, not just to treat the disease, but to promote resilience in all domains of care. She completed her undergraduate bachelor of arts in Theatre at the State University of New York in Albany, New York. She went on to Yale University School of Medicine in New Haven, Connecticut where she completed both a doctorate of medicine and a master of health science. She completed postdoctoral training first as an intern and resident at New York Presbyterian Hospital-Columbia University Medical Center in New York in the Department of Obstetrics and Gynecology, New York and then as a clinical fellow at Montefiore Medical Center-Albert Einstein College of Medicine in Bronx, New York, in the Division of Gynecologic Oncology. She also completed clinical fellow training in Palliative Medicine and Hospice in the Department of Geriatrics and Palliative Medicine at Icahn School of Medicine at Mount Sinai, New York, New York. She is currently an Associate Professor and Program Director of the Gynecologic Oncology Fellowship at the University of Kansas.

I am committed to research collaboration, both in Gynecologic Oncology and in Palliative Medicine. I am most interested in the advancement of research at the intersection of palliative medicine and oncology. I am a member of the Palliative Care Research Cooperative Group and volunteer for organizational activities such as grant review. As a PCRC member, we applied for and were accepted to be a designated site for the largest interventional palliative care study ever performed, the REACH-PC Study: Comparative Effectiveness of Early Integrated Telehealth versus In-Person Palliative Care for Patients with Advanced Lung Cancer, a Patient Centered Outcomes Research Institute Grant. As the Site Principal Investigator, I aim to increase my knowledge of research administration, additionally become savvy in state-of-the-art patient care technologies, and consider how to apply these technologies to our patients in rural settings.

We were awarded a service grant to establish the Woman to Woman OCRA Peer Mentoring Program at the KUCC. While we successfully administered the service component of this grant including establishing two program coordinators, training 16 mentors, and creating matches, I have also mentored a medical student Hannah Moran MS2, in collaboration with Dr. Joanna Brooks, to create a qualitative research protocol to assess the strengths and efficacy of this novel peer to peer mentoring program.

Additionally, as a gynecologic oncologist I actively participate in our Gynecologic Oncology Disease Working Group and support our clinical trials program by recruiting and enrolling patients.