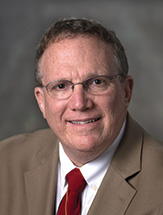 Dr. James Hamilton, Jr., MD, FACS, is an Assistant Professor in the Bariatric Surgery Division at the University of Kansas Medical Center. Dr. Hamilton was raised as the son of a family physician in the rural Western Kansas town of WaKeeney. Jim completed his medical degree at the University of Kansas School of Medicine, where he served as President of the Medical Student Assembly, and President of Alpha Omega Alpha Medical Honor Society. Dr. Hamilton completed his surgical internship, residency, and chief residency in Boston, Massachusetts, at the New England Deaconess/Harvard Surgical Service. Jim also completed an additional year of training in vascular surgery as a Registrar in Surgery at the Royal Infirmary in Aberdeen, Scotland, and a fellowship in hepatic and biliary surgery at the University of Bern, Switzerland, under Prof. Leslie Blumgart. Always a Kansan at heart, Dr. Hamilton returned to Topeka, where he has practiced surgery since 1987 and has mentored virtually every surgical resident to complete KU's surgical residency during that time.

Dr. Hamilton enjoys working with people, has always excelled at science and math, and has a broad interest in music and the humanities. He also likes to work with his hands. Jim chose General Surgery as a career because it best combines the requirements of a mastery of a vast fund of knowledge with the need to solve complex diagnostic problems in the care of critically ill patients while utilizing his skills in the operating room to help his patients heal.
Dr. Hamilton joined our faculty in 2017 as an expert in Metabolic, Bariatric, and Minimally Invasive Surgery at the KU Indian Creek and Main Campuses, while continuing his broad-based practice of General Surgery in Topeka, Kansas.