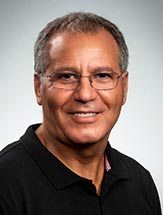 Dr. Okut completed his master's degree at Van Yüzüncü Yıl University (YYÜ) Institute of Science in 1988 and his doctorate education at Ege University Institute of Science in 1992. During his doctoral studies, he went to the University of Minnesota to attend lectures and conduct research on Statistics-Biostatistics-Quantitative Genetics. He worked as an Assistant Professor in the Department of Biometry and Genetics at Van YYU in 1992-1996, as an Associate Professor in 1996-2001, and as a full Professor between 2002-2018. He completed his postdoctoral studies at the University of Nebraska as a TUBITAK B2 ( The Scientific and Technological Research Council of Turkey ) scholarship holder in 1997-1998 and took active roles in some ongoing three projects. Between 2001-2003, he was a Fulbright Scholar and Senior Research Associate at Oregon Research Institute and University of Oregon and took part in many projects. In 2005, he was invited by the University of Palermo, Italy, as a European Union Marie Curie European Transfer of Knowledge scholar, where he lectured doctoral students and academicians on three different advanced courses for 4 months. In 2007, he received support from the European Union Advisory Board for a project he prepared with Northern Ireland -Queen's University-Belfast, and the project was completed in 2009. In 2009, he worked as a senior research associate at the University of Wisconsin, Department of Animal Science. He mainly worked on Artificial Neural Networks for big data, taught graduate level and workshops on Supervised Artificial Neural Networks. In 2014, he was invited to lecture to doctoral students on "Mixed Models for Genetic Data" with a Nell'ambito del progetto scholarship at the University of Palermo, Italy. In 2015, he was given a scholarship by the Wake Forest University, School of Medicine: Genomic Center and Personalized Medicine department to work on "Machine learning and GWAS '', to conduct data analysis of many ongoing projects and to give postgraduate courses. He started working at Kansas University-School of Medicine-Wichita, Department of Population Health in 2018. He teaches Advance Epidemiology I and Advance Epidemiology II for the MPH program, giving consulting and data analyzing jobs to honor students, residents and faculty and providing biostatistical consulting to write grant proposals.

Dr. Okut`s primary research interests lie broadly in supervised and unsupervised statistical methodology in omics data and other big data sources, general and generalized mixed model methodologies, and a variety of applied statistics methodologies. Before he started his job in the University of Kansas School of Medicine-Wichita in June 2018, he had a chance to work with many worldwide recognized academicians at the University of Nebraska, Oregon Research Institute, at the University of Wisconsin and at the Wake Forest University, School of Medicine on restricted maximum likelihood (REML), multi-layer feed-forward artificial neural networks by Bayesian regularization, Structural Equation Models and Multilevel, Latent Growth Models and Mixture Models), scaled elastic net regularized regression method, GWAS imputation when individual-level data are not available, for high dimensional and inter-correlated traits, time-course analyses for microarray data and unsupervised clustering methods. Since 2009, Dr. Okut dedicated his research target on a new methodology for prediction and genomic selection issues using supervised machine learning methods. He intensively worked on Feed-Forward Multilayer Artificial Neural Network architectures for better generalization of prediction for the associations between genomic variables (e.g. molecular markers) and complex phenotypes include the possible existence of cryptic relationships that may not be amenable to parametric statistical modeling. Recently, he started to work on deep learning algorithms (recurrent artificial networks and long-short term memory, LSTM). In addition, Dr. Okut is actively working on many honor student and faculty fellows projects, developing models for these projects for data coming from the research fields or from complex survey data.