Read brief biographical spotlights about Arab American faculty and students to learn about community members’ backgrounds, careers and what brought them to KU Medical Center. 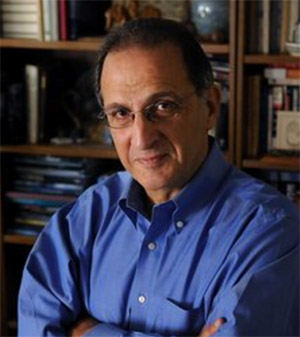 A presentation by James Zogby, Ph.D., co-founder and president of the Arab American Institute, a Washington, D.C.-based organization that serves as the political and policy research arm of the Arab American community. He is director of Zogby Research Services, a firm that has conducted groundbreaking surveys across the Middle East.

In September 2013, President Obama appointed Dr. Zogby to the United States Commission on International Religious Freedom. He was reappointed to a second term in 2015 and concluded his service in May 2017. He was twice elected vice chair.

Dr. Zogby has also been personally active in U.S. politics for many years; in 1984 and 1988 he served as Deputy Campaign manager and Senior Advisor to the Jesse Jackson Presidential campaign. In 1988, he led the first-ever debate on Palestinian statehood at that year’s Democratic convention in Atlanta, GA. In 2000, 2008 and 2016 he served as an advisor to the Gore, Obama and Sanders presidential campaigns.

For the past three decades, he has served in leadership roles in the Democratic National Committee. He currently serves as chair of the DNC Ethnic Council, an umbrella organization of Democratic Party leaders of European and Mediterranean descent. He served on the DNC's Executive Committee from 2000 to 2017 and for more than a decade served as co-chair of the party's Resolutions Committee.

In 1975, Dr. Zogby received his doctorate from Temple University’s Department of Religion, where he studied under the Islamic scholar Dr. Ismail al-Faruqi. He was a National Endowment for the Humanities post-doctoral fellow at Princeton University in 1976 and is the recipient of a number of honorary doctorate degrees.

Shop or Dine at a Middle Eastern Market or Restaurant

Office for Diversity, Equity and Inclusion