Since 2012, the KU Center for Telemedicine and Telehealth (KUCTT) has worked with the KUMC Division of Psychology of the Department of Psychiatry and Behavioral Sciences to support telemedicine interns in an underserved population track, where telemedicine is often more able to help reach these populations. The Clinical Psychology Internship Program is planned and implemented within the Division of Psychology of the Department of Psychiatry and Behavioral Sciences and its Director of Training, Edward E. Hunter, Ph.D., ABPP. The Underserved Populations Track is intended for individuals who foresee their careers as involving working with disadvantaged populations, including work in underserved areas or communities. Interns on the Underserved Populations Track receive training and experience in telemental health with KUCTT in their telemedicine rotation. Interns experience supervision from several supervisors in areas of adult and pediatric psychology, in order to enhance their depth of learning and awareness of diverse styles of competent practice, as well as to help them find which styles best complement their emerging professional identity. Telemedicine interns also have the opportunity to shadow other telemedicine providers at KUMC in areas of Child Psychiatry, Child, Adult, and Geriatric Psychology, Autism Developmental Evaluation, Special Child Behavioral (PICT), Feeding Issues, and Psycho-oncology. 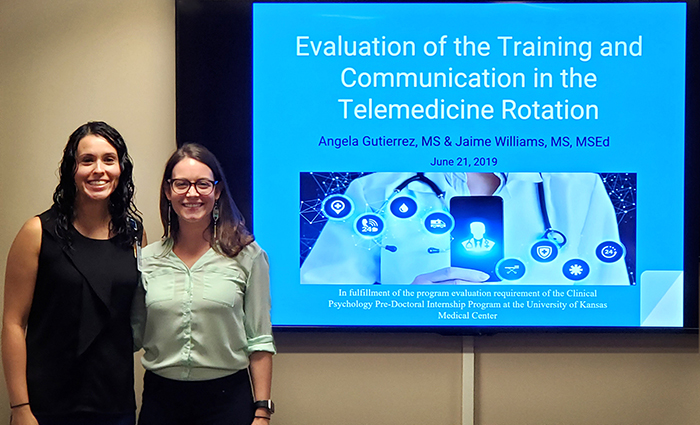 Visit the Predoctoral Internship program at the KU School of Medicine.

On March 12th, Dr. Edward (Ned) Hunter, Professor and Director of Training in the Department of Psychiatry and Behavioral Sciences at University of Kansas Medical Center, 2019-2020 KUMC predoctoral Psychology interns Samantha Reznik and Ruben Tinajero, and Dr. Shawna Wright, Associate Director of KU Center for Telemedicine & Telehealth, were able to visit several sites of the Southeast Kansas Mental Health Center (SEKMHC) sites in Iola, Humbolt, Chanute, and Yates Center. Under the Clinical Director, Dr. Doug Wright, SEKMHC provides mental health services in rural and underserved populations and is the National Health Service Corps (NHSC) approved sites. The interns work on an Underserved Populations program under an HRSA grant that seeks to train interns who will do their part to reduce health disparities and address cultural, economic and geographic barriers to healthcare. Since 2012, KUCTT has worked with the KUMC Division of Psychology of the Department of Psychiatry and Behavioral Sciences to support telemedicine interns in an underserved population track, where telemedicine is often more able to help reach these populations. This visit gave the interns a chance to visit a rural mental health center to see how it works and meet rural professionals dedicated to health care.