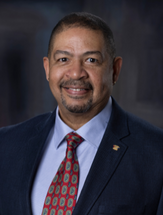 For more than 27 years, Colonel William J. Howard III served both his country and his fellow soldiers in the U.S. Army. While still studying for his bachelor’s degree in occupational therapy at the University of Kansas, he received a Regular Army commission as a second lieutenant in the United States Army in December 1981.

After graduating from KU, he took his expertise to the Army Medical Specialist Corps, a part of the Army Medical Department. In his decorated military career, COL Bill Howard served as part of the 3rd Mental Health Advisory Team (MHAT III) in Iraq in 2005, helped create a traumatic brain injury program for the Army’s Pacific Regional Medical Command and rose to the position of chief or assistant chief of occupational therapy at five of the Army’s largest hospitals.

Bill Howard points to his leadership at Walter Reed Army Medical Center in Washington, D.C. and Tripler Army Medical Center in Honolulu, Hawaii, as proud professional accomplishments. “During a wartime footing, there is no higher honor than being able to assist our soldiers, sailors, Marines, airmen and Coast Guardsmen back to their highest level of function and return to duty or their communities,” Bill Howard wrote.

Bill Howard retired from the Army in 2009 at the rank of Colonel, but he continued to contribute to health of the U.S. Armed Forces as manager of the Comprehensive Soldier and Family Fitness Training Center at Joint Base Lewis-McChord in Washington State. In 2015, he joined the Rehab Department of Creighton University Medical Center in Omaha, Nebraska, in its Interprofessional Education Outpatient Primary Care Clinic. There, he continues to demonstrate his commitment to both teaching and patient care.

More than 40 occupational therapy students in both military and civilian life have benefitted from Howard’s direct mentorship, and scores of others have been guided by his expert clinical skills and his ability to teach those skills to others. “He is the role model that all teachers should desire to be,” explained Paula Woolworth, OT’79, 2020 Distinguished Health Professions Alumna.

Bill Howard was also an active member of the Board of Advocates for KU School of Health Professions, helping to guide his alma mater and donating his time to benefit current and future health professionals. KU Health Professions Board President Francie Stoner recommended Bill Howard for the SHP Distinguished Alumni Award because she was “immediately impressed by his integrity, his creativity and his passion for service and making a difference.”

He shares this honor with his children, LauRen B. Howard and W. Vincent Howard, as well as his wife, Susan L. Howard, whom he wed in 2015 in Omaha.