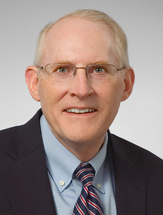 For an alumnus of Kansas State University whose father was a professor there and whose wife, mother and brother were also Wildcats, Scott Moser certainly turned out to be a consummate Jayhawk.

But not before he made a couple more detours: After graduating from K-State, Moser earned his medical degree from Baylor College of Medicine in 1980, completed a residency in family medicine at Scott Air Force Base in Illinois and was then stationed at Offutt Air Force Base in Nebraska, where he also taught at Creighton University. He returned to Kansas in 1987, working years in private practice in Newton before joining the faculty at the University of Kansas School of Medicine-Wichita Family Medicine Residency Program at Wesley Medical Center.

From the time he became a KU School of Medicine faculty member in 1989 through his retirement in January 2022, Dr. Moser’s academic achievements led to steady promotions, greater responsibilities and ever-greater titles.

Dr. Moser has been recognized for many years as a “Best Doctor” in Wichita and was a Wichita “Health Care Hero” in 2013. Through the promotions and awards, his commitment to educating medical students has not wavered. His lengthy list of teaching awards includes four separate school-wide honors. He has also published national research on medical education.

“He has had a distinguished career in clinical care and medical education,” wrote Rick Kellerman, MD’78, professor and chair of the Department of Family & Community Medicine at KU School of Medicine-Wichita, in his letter nominating Moser as an Honorary Medical Alumnus. “Dr. Moser’s contributions are of national scope.”

His impact on education for students, residents and practicing physicians at KU School of Medicine-Wichita is hard to overstate. In 2005, he became vice chair for education in the Department of Family & Community Medicine, and in 2015, he became associate dean for curriculum.

Dr. Moser’s capstone achievement is leading the development of the ACE (Active, Competency-based, and Excellence-driven) curriculum for medical students on the Wichita campus. The most sweeping redesign of the school’s curriculum in 20 years, the ACE curriculum, launched in 2017, reflects the way today’s students learn and is based on interactive and group activities related to the material. It recently received a strong endorsement from the Liaison Committee on Medical Education, an accrediting body for medical schools in the United States and Canada.

In addition to Dr. Kellerman, Dr. Moser cites his wife, Sharon, as a great source of support through his career. He calls her “my cheerleader throughout many challenging times and my best friend who is willing to correct me when I need it.”