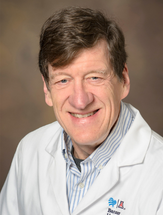 Frank Brosius remembers sitting in the backseat of the family’s car listening to “Puff the Magic Dragon” while his father, a cardiologist, made a house call one summer night more than 60 years ago. Throughout his own career as a nephrologist, Brosius has followed the example set by his father, also a University of Kansas School of Medicine alumnus, as a physician who goes out of his way to help his patients. Along the way, he’s also set a high standard as a barrier-busting researcher and outstanding educator.

Brosius earned a bachelor’s degree at the University of Kansas before earning his medical degree from KU School of Medicine in 1979. He then completed a year-long research fellowship at the National Institutes of Health that opened his eyes to biomedical research, followed by his internal medicine residency at the University of Michigan Hospital. After the birth of his first child, the family’s plans changed from providing care to refugees in Thailand to Dr. Brosius spending two years as a staff physician with the Indian Health Service at the White Mountain Apache IHS Hospital.

By the time Dr. Brosius completed clinical and research fellowships at the Beth Israel Hospital and Whitehead Institute in the Boston area in 1989, his family welcomed two more children, and he accepted a position as an assistant professor at the University of Michigan, where he spent most of his career.

Rising through the ranks, Dr. Brosius became chief of the nephrology division at Michigan in 2004. His proudest accomplishment has been to help build the division into one of the strongest kidney disease research groups in the nation, while providing quality patient care and training young physicians and learners. As co-director and then director of the fellowship program from 1996 through 2009, he trained more than 100 nephrologists, many of whom serve in prominent positions in industry, government and academia.

Dr. Brosius’ research led to the discovery of a new drug currently in development to prevent kidney failure in people with diabetes. He has been invited to discuss his research on diabetic kidney disease at multiple conferences around the world.

After retiring from Michigan in 2016, Dr. Brosius’ love of the Southwest and his daughters and grandchildren drew him to Tucson, Arizona. He lives there with Kate, his wife of 43 years, whom he calls his true partner and the one he can count on to give him honest advice – even if he doesn’t want it – and to always lead him to becoming a better man. They have three daughters: Anna, Emily and Liza. He also currently maintains a half-time appointment as a professor of internal medicine at the University of Arizona/Banner Health Medical Group and continues to collaborate with his University of Michigan colleagues.

“This is truly a capstone to my career in medicine,” he said. “To be honored by the institution I grew up in means more than I can express. I am very grateful and immensely humbled by this award.”