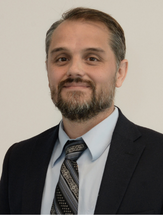 Early in his career, Eric Vidoni bought in on the vision laid out by one of his mentors, Jeffrey Burns, MD’98, for a research and care program for people with dementia and Alzheimer’s disease - and he’s never looked back.

Since joining the Department of Neurology at the University of Kansas School of Medicine in 2010, Dr. Vidoni, currently an associate professor, has been crucial in building the University of Kansas Alzheimer’s Disease Research Center (KU ADRC) into one of 33 Alzheimer’s Disease Research Centers in the country designated by the National Institute on Aging. As a member of the KU ADRC’s Executive Committee, Dr. Vidoni helped create an infrastructure that supports more than 100 investigators and $17 million in annual funding. He also directs the KU ADRC’s Outreach, Recruitment and Education (ORE) and Research Education Component (REC) cores.

Under his leadership, the ORE Core focuses on educating the public on dementia and research opportunities through community talks and develops and maintains innovative outreach and clinical trial recruitment initiatives, allowing the center to support an increasing number of researchers and larger studies. The Core has evolved into a national model. As head of the REC Core, he created and co-directs the Kansas Dementia and Aging Research Training program for aspiring researchers, especially those who identify with communities underrepresented in science.

Dr. Vidoni’s primary area of expertise is the role of physical exercise in promoting brain health. A strong researcher with a growing national and international reputation, he’s credited with 100 peer-reviewed publications and has served as a principle or co-investigator on at least a dozen National Institutes of Health grants. He also mentors postdoctoral fellows, including two who have joined the KU ADRC faculty since 2018.

“In all this, Eric has been utterly selfless and without ego, and his integrity is beyond reproach,” wrote Russell Swerdlow, MD, co-director of the KU ADRC, in his letter of recommendation for this award. “I recognize people see Dr. Burns and myself as the Lennon and McCartney of the KU ADRC, but if one accepts this, then Eric is certainly our George Harrison. Everything he touches becomes better, not only better than it was, but also better than anyone could have imagined. Without Eric, there would not be a KU ADRC.”

Dr. Vidoni earned a master’s degree in physical therapy and a PhD in rehabilitation sciences from the University of Kansas School of Health Professions. He also completed a postdoctoral fellowship in neurology. He lives with his wife, whom he counts among his mentors.

“I’m proud of being part of a great team at the KU ADRC,” he said. “This award is really about the value of interdisciplinary work. It’s an honor to come from the KU School of Health Professions and be a bridge to the KU School of Medicine.”