Axicabtagene ciloleucel, known by the brand name Yescarta, is significantly more effective than the current standard of care in treating people with large B-cell lymphoma who relapse after the first line of treatment. 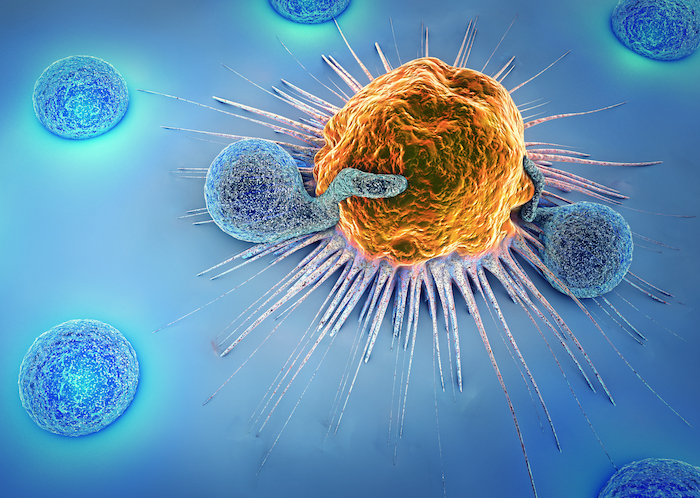 A study published this month in the New England Journal of Medicine (NEJM) may change the standard of care for adults who relapse from large B-cell lymphoma.

"This is a paradigm shift," said Joseph McGuirk, D.O., medical director of the blood and marrow transplant program at The University of Kansas Cancer Center, which is one of the leading sites in enrolling participants in the trial. McGuirk is a co-author on the study.

According to the results of a clinical trial published Dec. 11 and presented at the American Society of Hematology (ASH) annual meeting the same day, a form of chimeric antigen receptor T-cell (CAR-T) therapy known by its brand name, Yescarta (axicabtagene ciloleucel), is significantly more effective than the current standard of care in treating people with large B-cell lymphoma (LBCL) who relapse after the first line of treatment.

Yescarta, made by Kite Pharmaceuticals, was first approved by the U.S. Food and Drug Administration in 2017 as a third-line treatment for adults with LBCL, i.e., for those who had already undergone two rounds of treatment that failed. The goal of the ZUMA-7 trial was to determine if a one-time infusion of Yescarta is superior to the existing, longstanding second-line standard of care, which is a stem cell transplant following high-dose chemotherapy to kill the lymphoma.

The two-year follow-up results indicate that it is. About 40% of people with LBCL need such second-line treatment, either because their cancer returns or does not respond adequately to frontline treatment.

"We're seeing upfront responses that are significantly better than what we see with autologous stem cell transplants,” McGuirk said.

The two-year follow-up data shows that median event-free survival, defined as survival without disease progression or need for a new lymphoma treatment, for people receiving Yescarta was quadruple that of those receiving standard of care: 8.3 months for the Yescarta group versus 2 months for standard-of-care.

CAR-T therapy is a novel type of immunotherapy in which blood is drawn from a patient, and then T-cells (white blood cells that detect disease-causing organisms in the body) are extracted and genetically re-engineered. These turbocharged cells are used to create the drug that is injected back into the patient to attack cancer.

ZUMA-7 began in 2017 and enrolled 359 people in 77 trial sites around the world. Participants ranged in age from 22 to 81. Nearly one-third of them were 65 and older, an age that in some countries would render them ineligible for a stem cell transplant.

"I believe we are likely to see the field quickly move away from autologous stem cell transplant toward CAR-T cell therapy as a second-line therapy for relapsed or refractory diffuse large B-cell lymphoma," McGuirk said.