A special town hall meeting sponsored by The University of Kansas Cancer Center analyzed the vaping trend and aired on Fox 4 WDAF. 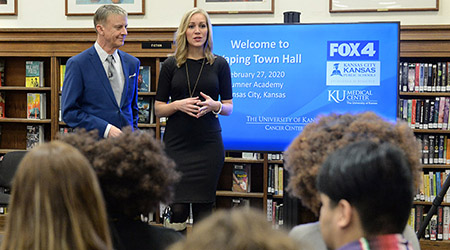 Getting teens to understand the risks of vaping was the goal of a special town hall meeting sponsored by The University of Kansas Cancer Center in partnership with Fox4 WDAF and the Kansas City Kansas School District.

Around 60 students from Sumner Academy in Kansas City, Kansas, listened to experts and asked questions regarding e-cigarettes while gathered in the school's library Feb. 27.

Charles Foust, Ph.D., superintendent of the Kansas City Kansas School District, urged students to be honest and open with the panel. "I know that our students are excited and ready to give some insight on some of the things that are happening in their lives that we don't necessarily understand, or often realize is going on," he said.

A livestream broadcast of the town hall was available on Fox4's Facebook page, and anchors John Holt and Abby Eden facilitated the event.

Holt pointed to a recent survey of students that indicated 30 percent of Kansas youth admitted to vaping, which was similar to the national average. He then introduced the panel representing the KU Cancer Center, which included:

The town hall was just two weeks after the Massachusetts attorney general announced a lawsuit against vaping company JUUL for targeting youth in its advertising. Jensen shared his take on how those companies target teens.

"Lawsuits that have been brought by school districts and a number of other advocacy organizations have exposed the fact that marketing directly to teenagers has always been part of their core business strategy," he said.

"They know that you and your peers across the country are perhaps the most vulnerable group to their advertising campaigns, and (they're) trying to get people addicted because, frankly, it's much easier to get young people addicted to these products than it is older individuals," Jensen said.

He said flavors added to vape products are an unmistakable confirmation of the teen marketing plan. "You know, there's not a lot of 45-year-olds who are interested in buying anything that's flavored with unicorn vomit," he said.

One slide in his presentation showed K.C. Crosthwaite, current CEO for JUUL and former CEO of tobacco company Philip Morris.

"Big Tobacco has basically muscled their way into the vaping industry," he said. "It started off as kind of a mom and pop situation. And quickly Big Tobacco figured out that this is the future of nicotine addiction."

Nicotine addiction is a specialty for Martin, who studies the neuroscience of impulsiveness and reward-seeking behavior.

"The areas that help you make decisions, help control this reward response, don't really develop until you're in your 20s," Martin explained to the students. "So right now, your reward systems are on overdrive."

That makes young people prime targets for nicotine, since nicotine offers an initial reward of the feel-good chemical dopamine.

"What we know from years and years and years of research on nicotine and other drugs is that these drugs actually change the brain and decrease the number of dopamine receptors you have in the brain, which means you have to keep using the drug to keep those dopamine levels high," Martin said.

That message really stuck with Chase Gamble. The Sumner Academy sophomore said she tried vaping once out of curiosity but didn't really see the point of it. She found the brain information intriguing and worth sharing with her vaping friends.

Salathe, a pulmonologist, performs research on vaping and its effects on the lungs using a vaping robot in his lab at the University of Kansas Medical Center.

"There are multiple studies, including from us, that show that the lungs are being damaged by [vaping]. There is inflammation when you do this in your lungs, there is destruction of the lungs, and there is a reduction in your ability to clear your phlegm out," Salathe said.

"You don't know, because until you can actually measure something, you have to have already a significant damage to the lung," Salathe said. "Now, from cigarette smoking, if that significant damage occurs, it will never go back to normal. If the damage doesn't occur, it may take years to reduce risks that are associated with smoking. And I expect the same to happen with vapor."

After the town hall, Freeman said she was happy to participate. "It was nice having the professors here who specialize [in vaping] to get some real concrete medical answers for our questions. I thought it was very productive," she said.

Student Hugo Juarez Avalos said the town hall gave him a chance to be heard on a topic important to his age group. "I believe it's an issue that could possibly kill you. And obviously I don't want my friends to get addicted onto something that is potentially dangerous," he said. "I'm just looking at the issue for the sake of my friends and their futures." 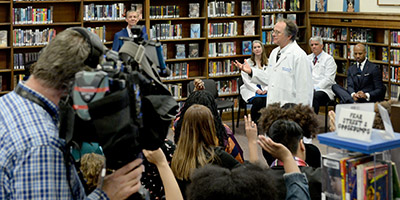