U.S. News and World Report placed KU’s Bachelor of Science in Nursing as 22nd among all public colleges and 29th among all schools in its Best Colleges Ranking. 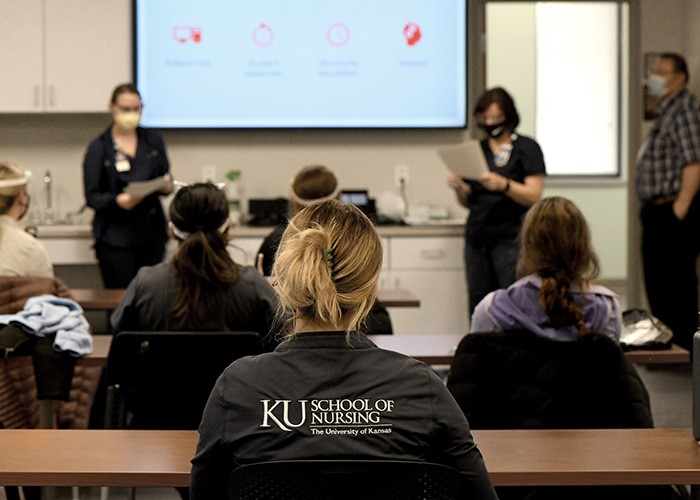 The University of Kansas School of Nursing was named No. 22 in the U.S. News and World Report Best Colleges Ranking for 2023 among all public colleges and universities and 29th among all schools ranked. Photo by KU Medical Center Photo Services

U.S. News and World Report has again ranked the University of Kansas School of Nursing in its top-25 best undergraduate nursing programs in the nation.

The school remained 22nd among all public colleges and universities, and it rose from 31st to 29th of all schools in the Best Colleges Ranking for 2023.

“We’re pleased to have maintained and improved our rank among a field of very strong educational programs,” said Sally Maliski, Ph.D., FAAN, dean of KU School of Nursing. “This reflects the hard work of our entire faculty, staff and students. Now more than ever, it’s important to focus on our mission of producing nurses to enter the demanding health care field.”

A field of 681 schools were judged in the Bachelor of Science in Nursing (BSN) category. While U.S. News and World Report has provided college rankings yearly since 1983, this is just its second year of ranking undergraduate nursing programs.

KU School of Nursing worked with the University of Kansas Medical Center's Office of Enterprise Analytics to complete surveys sent by U.S. News and World Report. Though the surveys are time-consuming and detailed, Maliski said, they do offer the school a side-by-side comparison of peer institutions.

"The preparation gives us a chance to reflect, and the results of the ranking give us validation that we’re headed in the right direction," Maliski said.

Earlier this spring, graduate programs were ranked, and U.S. News and World Report ranked another KU School of Nursing program, the Nursing-Midwifery program, as No. 11 among public universities.

KU School of Nursing has campuses in Salina, Kansas, and Kansas City, Kansas.

For more on the undergraduate rankings, released Sept. 12, 2022, visit usnews.com/best-colleges/rankings. The University of Kansas placed 22nd among other public schools in the Best Value Schools rankings and 56th of all public schools ranked.