The American Society for Gravitational and Space Research (ASGR) recognized Joseph S. Tash, emeritus professor of molecular and integrative physiology at the University of Kansas Medical Center, with its prestigious Founder’s Award. 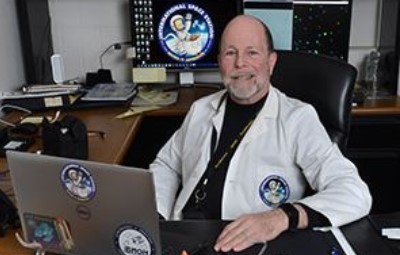 KU Medical Center Professor Emeritus Joseph Tash sent frozen samples of human and bull sperm aboard a manned rocket in 2018 and sea urchin sperm aboard the space shuttle in 1997. The American Society for Gravitational and Space Research honored his pioneering research.

For his pioneering research on reproductive biology in space, the American Society for Gravitational and Space Research (ASGSR) has presented Joseph S. Tash with its prestigious Founder's Award.

Tash, emeritus professor of molecular and integrative physiology at the University of Kansas Medical Center, received the ASGSR's highest honor at its 36th annual convention, held virtually for 2020.

Tash's most recent research investigated how the small amount of gravity in space, called microgravity, might affect human and animal reproduction. Specifically, he studied what an extended amount of time in outer space might do to the functionality of sperm.

That knowledge is essential in discovering whether humans can reproduce in space, which could prove vital to the long-term viability of humans not living on Earth.

"One of the long-term interests of NASA is looking at multi-generational survival as we plan longer and longer-duration missions," Tash said. "As we plan to travel beyond the space station with thoughts of colonization on the moon and Mars and other heavenly bodies, the question of whether or not multi-generational survival can occur - not only in animals but in humans - is a very fundamental question that needs to be addressed."

To that end, Tash sent frozen samples of human and bull sperm aboard SpaceX-14, SpaceX's Falcon 9 rocket, in April 2018. Once the samples reached the International Space Station, NASA astronauts Drew Feustel and Serena Aunon-Chancellor thawed the sperm and conducted specific experiments Tash had developed. Tash performed parallel experiments on Earth so the samples could be compared.

The experiments gaged the sperm's movement (called motility activation) using similar methods used clinically for in vitro fertilization, as well as their ability to undergo changes (called capacitation) required to be able to fertilize an egg (although no eggs were present in these experiments).

The ASGSR is a nonprofit organization that brings together experts in biology, physical science and engineering to advance research on gravity and how it affects living organisms and physical systems. The ASGSR has selected recipients for the Founder's Award annually since 1989; Tash was the singular Founder's Award honoree for 2020.