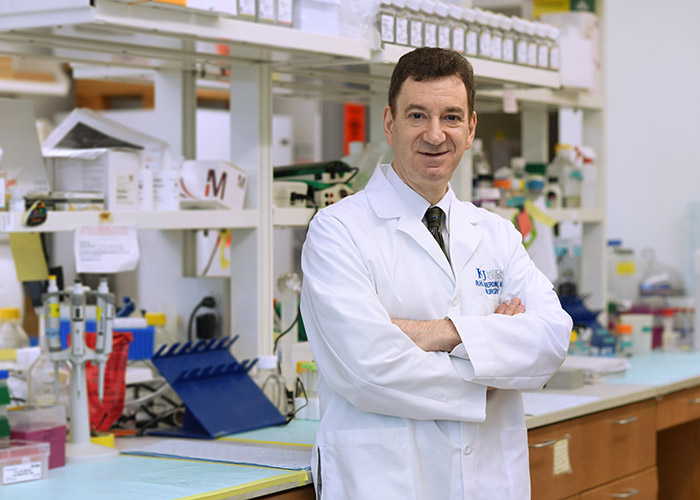 Russell Swerdlow, M.D., director of the University of Kansas Alzheimer’s Disease Research Center, was recognized as one of 10 Oskar Fischer Prize winners. The prize, designed to expand society’s understanding of the causes of Alzheimer’s disease, is the world’s largest of its kind, with $4 million awarded across three categories.

Russell Swerdlow, M.D., director of the University of Kansas Alzheimer’s Disease Research Center, has chiseled out a rock-solid reputation as an unconventional thinker. Being recognized as one of 10 Oskar Fischer Prize winners only adds to that legacy.

The prize, aimed at expanding society’s understanding of the causes of Alzheimer’s disease, is the world’s largest of its kind, with $4 million awarded across three categories. As an Oskar Fischer Prize recipient, Swerdlow will receive $300,000.

An expert in brain energy metabolism, Swerdlow’s research focuses on the Mitochondrial Cascade Hypothesis, which represents his effort to tie together a field of work that argues mitochondria play a critical role in the development and progression of Alzheimer’s disease.

For Swerdlow, this hypothesis represents the evolution of research he initiated as a medical student at New York University in the 1980s, continued as a neurology resident at the University of Virginia, pursued as a postdoctoral fellow and faculty member at the University of Virginia, and brought with him to the University of Kansas Medical Center in 2007. The hypothesis asserts that deficient brain energy and malfunctioning mitochondria initiate late-onset Alzheimer’s disease. The theory, which has slowly gained traction over the last 15-plus years, runs counter to the longstanding hypothesis that the disease is caused by a buildup of beta-amyloid, a protein that forms plaques, and tangles of a protein called tau, which are always present with Alzheimer’s.

“It is difficult to find words that capture my appreciation and gratitude to the Oskar Fischer Prize Committee for this recognition,” Swerdlow said. “It means so much to me that the committee sees the hypothesis that has guided my research efforts over several decades, the Mitochondrial Cascade Hypothesis, as a serious hypothesis that warrants serious consideration by the broader field.”

In addition to serving as the Gene and Marge Sweeney Professor of Neurology at KU Medical Center, Swerdlow also holds professorships in the departments of Molecular and Integrative Physiology and Biochemistry and Molecular Biology. He directs the KU ADRC, one of 31 Alzheimer’s Disease Research Centers designated by the National Institute on Aging and a world leader in the study of the role of mitochondria in Alzheimer’s disease. Swerdlow previously received the 1997 S. Weir Mitchell Award, a scientific research award from the American Academy of Neurology, and he was the 2014 recipient of the University of Kansas Chancellor’s Club Research Award.

“I also want to thank the mentors, mentees, collaborators, colleagues, and supporters that helped me to conceive, develop and advance the Mitochondrial Cascade Hypothesis,” he said. “I hope it will continue to lead to a better understanding of what drives Alzheimer’s disease, and ultimately to more effective treatments.”

The Oskar Fischer Prize was established in 2019 with a philanthropic gift to the University of Texas at San Antonio from Texas businessman James Truchard, Ph.D. As part of the rigorous competition, entrants were challenged to boil down the breadth of Alzheimer’s research to date into a single explanation for the cause of the disease. The winning entries include unique theories that highlight key aspects of Alzheimer’s and provide new frameworks for potential causes of the disease.

Oskar Fischer was a noted neuroscientist, entrepreneur and businessman who studied dementia and published a paper on the condition in 1907, the same year Alois Alzheimer, the disease’s namesake.