The 212 new students of the University of Kansas School of Medicine were invited to gather in person at Soldiers and Sailors Hall in Kansas City, Kansas, to signify the start of medical school and to reflect on the road ahead. 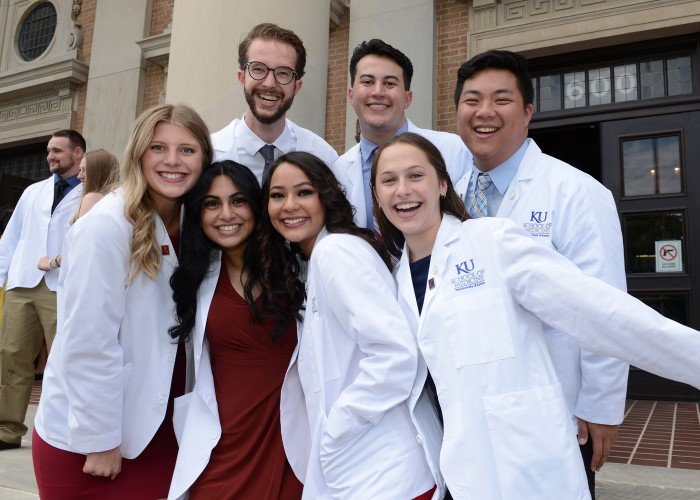 Members of the University of Kansas School of Medicine's Class of 2026 celebrate outside the auditorium where the traditional White Coat Ceremony was held. The school has been celebrating the ceremony since 1998.

The University of Kansas School of Medicine welcomed the Class of 2026 during its traditional White Coat Ceremony on July 22.

The ceremony marks the entry of first-year students into both medical school and the medical profession. It’s also a chance for family and friends to share in the momentous beginning many students have been planning since the moment they knew they wanted to be a doctor.

The 212 students that comprise the Class of 2026 were invited to gather face-to-face at Soldiers and Sailors Memorial Hall in Kansas City. All three campuses – Kansas City, Salina and Wichita – came together to don the jackets that are signifiers of the medical profession. Participants also received a pin designating their assigned academic society, and they signed an honor code that guides their morals and ethics as they enter medical school.

‘Medicine is a beautiful roller coaster’

David Becker, M.D., assistant professor of internal medicine in the division of general, geriatric and hospital medicine at KU School of Medicine, was the keynote speaker. Becker received the Rainbow Award in 2022, an honor voted upon by medical students to reflect excellence, integrity and professionalism by a faculty member within the medical school.

Becker, who himself graduated from KU School of Medicine, recalled his own White Coat Ceremony and the pride his family felt. “Medicine is a beautiful roller coaster. You have done so much, but you have so far to go,” he said. “You’re supposed to support others in their most dire times, but you also get to be integral parts of their most joyous.”

‘A rite of passage for entering medical students’

Robert Moser, M.D., dean of KU School of Medicine-Salina, reminded students of the sanctity of the day. “(This ceremony) has been a rite of passage for entering medical students since 1998. Now, the white coat is a garment traditionally worn by other health professions, typically representing cleanliness, purity, et cetera,” Moser said. “The School of Medicine is recognizing the enormous amount of work and dedication that it’s taken to get you here today, and you should be very proud of that moment.”

After the ceremony, some medical students shared their feelings on the momentous day. 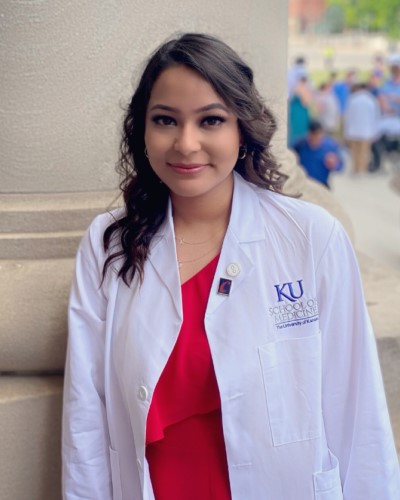 On becoming a doctor: I knew that I wanted to become a doctor at around the age of 6 years old. My grandma on my dad's side was having a lot of health issues and had been ignored by many doctors because baseline labs and imaging had come back negative. A female physician in Mexico provided my grandma the attention that she had been seeking for so long and ended up diagnosing her with multiple sclerosis. She inspired me to want to help families who were going through the same thing that mine did with my grandma.

Thoughts on White Coat: In a way, the White Coat Ceremony to me was KU School of Medicine's welcome to the medical profession as a physician-in-training. To don the white coat that I received at the ceremony is a symbol of professionalism and great significance. 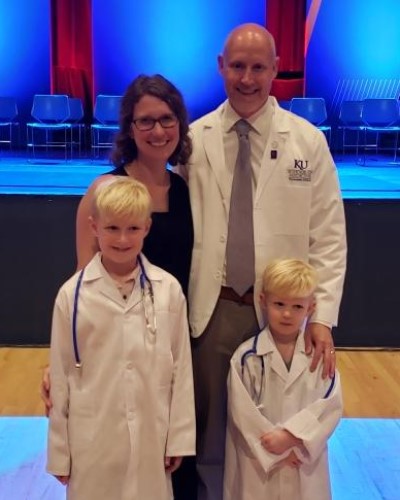 On becoming a doctor: I had thought about it for a while. However, in my circumstance, it took coming to a dead-end in my previous career before I got the courage to actually start taking steps in this direction. With the support of my wife, my two boys and my parents, we all made it here together. Now, I am eagerly looking forward to becoming a psychiatrist for the underserved in Kansas.

Thoughts on White Coat: It seems early to be getting the coat, as I feel I haven't yet earned the trust and responsibility that I attribute to it. I am thankful for the experience of the ceremony though, as it helped to set the tone and focus for what lies ahead. 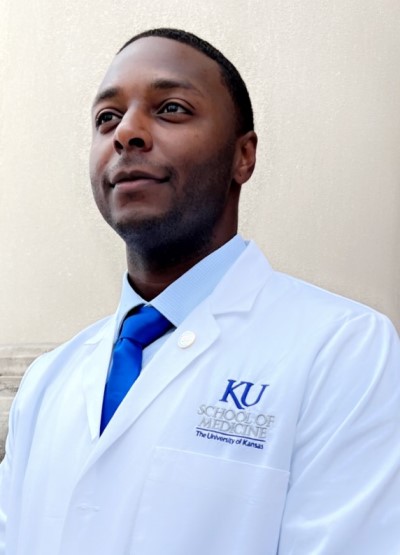 On becoming a doctor: In high school, I contemplated the idea of becoming a physician. After the passing of my 14-year-old cousin during my senior year, I knew that I wanted to pursue a career that would allow me to heal people. This encouraged me to join the U.S. Air Force as a medic. The idea of being a physician would linger for a couple of years into my college career. After several experiences, such as being a patient, providing medical care in the Emergency Department and becoming aware of the need for more black men in medicine, I then decided to fully commit to the journey of becoming a physician.

Thoughts on the road ahead: I expect to be intellectually and academically challenged. I look forward to acquiring the necessary knowledge and skills to become the competent, compassionate and empathetic physician that we want and need at our most vulnerable times. I expect to learn how to better understand others as well as become a better teacher. I anticipate being molded into an excellent physician with the assistance of my classmates, professors, mentors and the patients that I encounter. 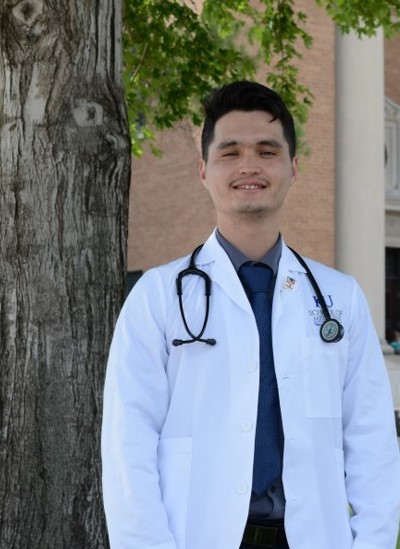 On becoming a doctor: In February of 2013, my town had seen the worst and most merciless bomb explosion. Terrorists had brought a water tanker full of explosives and blasted it in the farmer’s market. In the evening, this place gets crowded with children and women who visit the market to buy vegetables and fruits for the night. Hundreds died in this explosion, mostly women and children. Nearby learning centers collapsed with students in them. Due to lack of medical providers, hundreds of the injured lost their lives. This was the time when I knew I had to do something about it. It did not seem possible at all in Pakistan, but when I got into the U.S., I saw hope in the land of opportunities. With all the support I got from my family and friends, my dream became reality.

Thoughts on White Coat: Attending the ceremony is a privilege for me. It means that I am worthy of the trust that everyone put on me. My journey is not an individual’s journey. I could not have gotten here without the help of all the amazing people who made this possible. This is only the beginning.