If the program can raise $2,500 by Aug. 6, Robert D. Simari, M.D., executive vice chancellor, and Abiodun Akinwuntan, Ph.D., dean of the KU School of Health Professions, have agreed to participate in a swim-a-thon for Sensory Enhanced Aquatics. 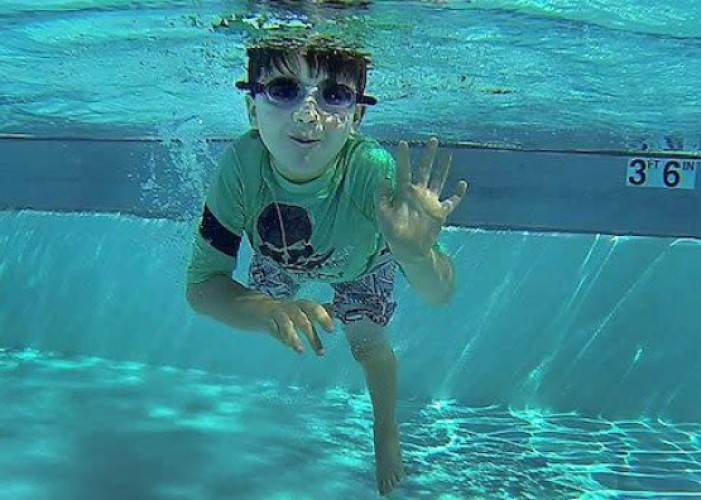 KU School of Health Professions faculty member Lisa Mische Lawson, Ph.D., professor of occupational therapy, director of the Sensory Enhanced Aquatics program at the University of Kansas Medical Center and certified therapeutic recreation specialist, has taken a unique approach to raising money for a program in the Department of Occupational Therapy Education that teaches water safety to individuals with autism.

First, Mische Lawson decided to use her own money to match donations up to $2,500. And second, she convinced two members of the KU Medical Center’s leadership to join her in an exhibition swim relay.

Robert D. Simari, M.D., executive vice chancellor of KU Medical Center, and Abiodun Akinwuntan, Ph.D., MPH, MBA, dean of KU School of Health Professions, will swim at 10:30 a.m. on Saturday, Aug. 6, at the Merriam Community Center, but only if at least $2,500 is raised before then. It’s a condition that Mische Lawson, not Simari or Akinwuntan, placed on their appearance to fuel contributions.

“Dr. Simari shared that he was a swimmer when he previously visited Sensory Enhanced Aquatics, and Dean Akinwuntan mentioned he swam in a junior state competition in Nigeria,” Mische Lawson said. “I first asked Dr. Simari and was encouraged when he didn’t immediately say no. They are both good sports to support us and engage with the community this way.”

The aquatic finale featuring Simari and Akinwuntan will be part of the swim-a-thon that begins at 9 a.m. that day. Swimmers who collected donations for the number of laps completed will kick things off, followed by an exhibition by the program’s participants and instructors at 10:15 a.m.  Kayla Hamner, program manager for Sensory Enhanced Aquatics, initiated the fundraiser.

Purpose of the program

The Sensory Enhanced Aquatics program stresses water safety and learn-to-swim techniques to individuals on the autism spectrum. Children on the spectrum have a 160 times greater likelihood of drowning than children not on the spectrum. Mische Lawson shared a few reasons why, including:

“A national survey showed nearly half of autistic children wander from safe places, and of those, 32% have had a close call with drowning," Mische Lawson said. "Wandering accounts for nearly 74% of fatal drowning incidents among autistic children, possibly because autistic children are reported to be drawn to water.”

In a qualitative study, Mische Lawson and her KU team explored the swim experiences of children with autism and their families to test that assumption.

“Parents confirmed their autistic children are drawn to water. They also shared safety concerns and near drowning experiences, including one child returned home by police wet and covered in mud,” Mische Lawson said.

Expansion of the program

Initially only for neurodivergent children, the Sensory Enhanced Aquatics program recently opened the program neurodivergent adults. A U.S. Masters Swimming Adult-Learn-to-Swim grant from the U.S.A Swimming Foundation made that possible.

“We recognized the need for adult Sensory Enhanced Aquatics as some of our original participants were aging out of the program,” Mische Lawson said. “This expansion will not only teach adults on the autism spectrum a life-saving skill but also open up opportunities to participate in a lifelong, physically active recreation activity.”

For more information on the fundraiser or to donate, visit the Launch KU website.