Robert L. Satcher, M.D., Ph.D., gives a new perspective to residents and faculty of the Department of Orthopedic Surgery and Sports Medicine during Peltier Lectureship. 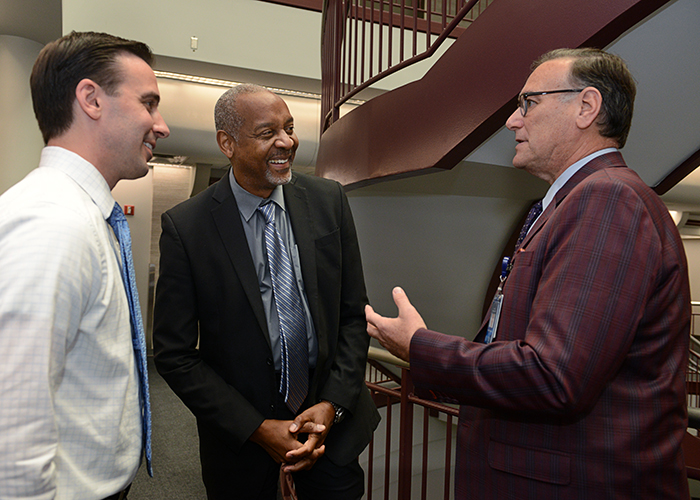 For more than two years, former astronaut Robert L. Satcher, M.D., Ph.D., was slated to speak at the graduation of orthopedic surgery residents at the University of Kansas Medical Center. Faculty in the Department of Orthopedic Surgery and Sports Medicine wanted him to share his inspiring stories of his time in space as well as his ongoing career in orthopedic medicine.

Then the COVID-19 pandemic hit. There would be no 2020 appearance. We’ll see you next year, the faculty said. But in 2021, COViD-19 again made an in-person gathering dangerous, so Satcher stayed home.

Finally, on June 25, 2022, residents and faculty gathered in an auditorium on the Kansas City, Kansas, campus to hear Satcher’s stories in person as part of the 25th Annual Leonard F. Peltier Orthopedic Lectureship.

The late Peltier, M.D., Ph.D., was professor of surgery at the University of Kansas from 1957 to 1971. He served as chief of orthopedic surgery and stressed the importance of well-trained residents. In addition to showcasing professionals in the field as keynote speakers, the lectureship features fourth-, fifth- and sixth-year residents presenting clinical cases and research.

Seeing the world from space 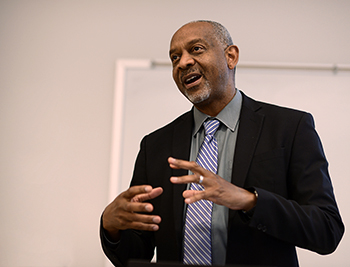 Satcher, associate professor of orthopedic oncology at the MD Anderson Cancer Center at The University of Texas-Houston, currently studies how cancer spreads to the skeleton. Later in the morning, he shared his research on trying to discover how kidney cancer attacks bones. But he opened the lectureship by talking about his space shuttle flight to the International Space Station in November 2009.

Highlights of his time with the National Aeronautics and Space Administration (NASA) and shuttle crew included:

Back on Earth at KU Medical Center

After the lectureship, Satcher said he was happy to have the chance to finally visit KU Medical Center. He said he enjoys talking about space travel and medicine – “they both have the same scientific ethos,” he explained – and the number of his talks have increased in the past few months.

Douglas Burton, M.D., professor and interim chair of the Department of Orthopedic Surgery and Sports Medicine, thanked Satcher for his insights. “Dr. Peltier was the third chair of orthopedics here at KU…but he also had a Ph.D., was fluent in French and German, and was the historian of orthopedics for several years. He was a real Renaissance man, and you’re like him, quite a Renaissance man: scientist, surgeon and astronaut.”

How exactly does an astronaut come to Kansas to speak?

So, how did Satcher's appearance at KU Medical Center come about? It's not so far-fetched when you consider two things.

First, Kimberly Templeton, professor in the Department of Orthopedic Surgery and Sports Medicine at KU Medical Center, participated in a NASA report on how sex and gender affects the  musculoskeletal health of people in space. These type of reviews occur every 10 years, and this one was published in 2014.

Second, Templeton and Satcher share common interests regarding diversity in medicine and orthopedic surgery. From there, Templeton invited the former astronaut to the KU Medical Center campus to speak.