Attracting and retaining medical staff is a major challenge in rural areas, second only to financial solvency for struggling community hospitals, according to panelists who are experts in rural health 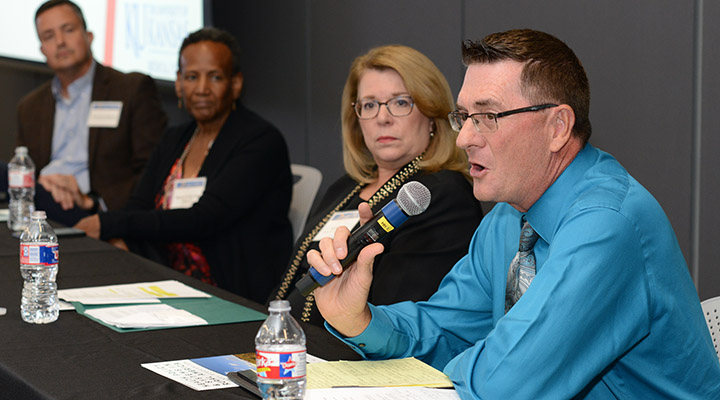 Attracting and retaining medical staff is a major challenge in rural areas, second only to financial solvency for struggling community hospitals, according to panelists in a recent discussion.

"Health Policy and Systems in Rural America" was the title of the panel presented Oct. 4 to share problems, solutions and predictions about health care in rural Kansas.

"I view access to care as the major issue in rural areas, to make sure that the patients get to see the physicians that they need to see ... so they don't have to drive those long hours to get the care they need," said Margaret L. Smith, MD, MHSA, associate professor at the KU School of Medicine's Department of Family Medicine and Community Health.

Scott R. Focke, MHSA, clinic administrator for Citizens Health in Colby, Kansas, said his employer focuses on "lifestyle" as incentives to recruitment, such as allowing doctors to take extended breaks or to work part-time.

"About 12 of the 23 providers (at Citizens Health) are part-time providers, and that's allowed them to pursue other interests - everything from doing overseas work to doing additional community work to simply just spending more time with their families," he said. "With that focus, that's allowed us to retain most of the providers."

Smaller communities also must consider new methods of care, such as telemedicine. Terri Gehring, president and CEO of McPherson Hospital in McPherson, Kansas, said nurses now call a remote service if they need to ask a doctor a question during evenings and overnight. "We were a little bit worried. Most of our inpatients are Medicare age, and we thought, ‘They're not going to accept this doc-in-a-box type thing.' But it's been pretty interesting. We've come to realize, many of them are grandparents, and that's probably how they talk to their grandchildren."

Gehring said the hospital also has leaned on physician's assistants and nurse practitioners for urgent-care needs.

Such solutions seem logical, but creative solutions can mess with a health care provider's bottom line. Take, for example, telemedicine. Medicaid and Medicare, government-subsidized programs for low-income individuals and the elderly, does not reimburse McPherson Hospital for care performed by telemedicine hospitalists (doctors who treat patients in the hospital).

"That's an extra expense that we just have to absorb," Gehring said.

"What I found was the concern with Medicaid for the physicians was really pretty similar both in the rural areas and in the cities or suburban areas - and that was reimbursement rates," she said. "As you know, Medicaid has rather low reimbursement rates, less than Medicare and significantly less than private health insurance," Smith said.

Chad Austin, MHSA, senior vice president for government relations for the Kansas Hospital Association, said KHA advocates for improved reimbursement rates. "A big component of what we do, not only on the state level but also on the federal level, is to work on advocacy issues related to payment."

Not surprising, then, is KHA's support of expanding Medicaid in Kansas. If Kansas legislators decided to accept federal funding and more low-income Kansans were covered by Medicaid, Austin said, rural hospitals would benefit enormously.

"In states that have expanded their Medicaid program, we see healthier hospitals. There's less closure for our hospitals in some of those states," he said.

Lauren Liguore, a 2019 graduate in the Master of Health Services Administration, currently works on business development and contracts for Children's Mercy Hospital. She returned to the KU Medical Center campus to gain more information about rural health care. She just became engaged, and her future husband may be interested in the couple relocating to a less populated area area similar to where he grew up, she said.

"It was very interesting about the (Medicaid) reimbursement. It sounds like there are some improvements and then some more room for improvement," Liguore said.

Akinlolu O. Ojo, M.D., executive dean of the University of Kansas School of Medicine, underscored the importance of the panel's topic. "If one is going to work with other systems and other leaders, inside this institution and outside this institution, to improve the aggregate health of the population of Kansas, a comprehensive rural health strategy has to be part of the equation," he said.