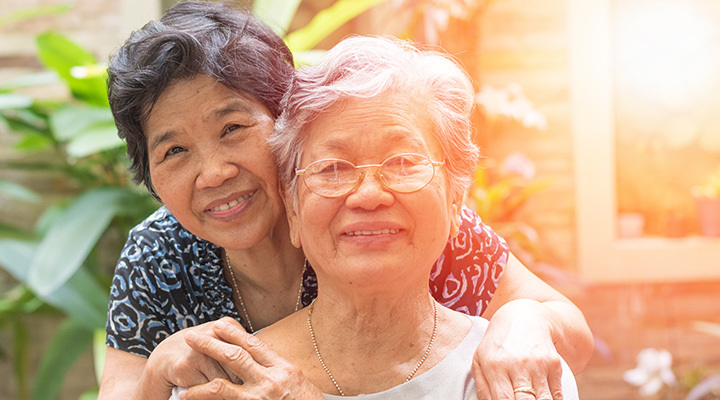 A unique outreach spearheaded by the University of Kansas Alzheimer's Disease Center is providing hope and help to Kansas residents who are caregivers for people with Alzheimer's or those with intellectual and developmental disabilities, who are at increased risk of developing dementia.

In the Reducing Disability in Alzheimer's Disease-Kansas City (RDAD-KC) program, social workers and trained health workers work one-on-one with families to identify and problem-solve challenges as well as to boost physical activity with an overall goal of increasing the quality of life for everyone.

"Dementia-specific social workers and nurses are few and far between around the state, and certainly those that can go into the home and assess are scarce, so the need for that is great," said Michelle Niedens, who directs the MyAlliance for Cognitive Health initiative at the KU ADC and oversees the 16 RDAD-KC interventionists spread across the state. "There isn't another program I'm aware of that measures these two really important variables that have the power of either advancing disability or reducing disability. It's a really unique program in that partnership, and they complement each other."

The program's 12-module curriculum is flexible and can be tailored to families' unique needs and circumstances. In most cases, interventionists conduct six to eight one-hour in-home visits with program participants, exploring issues and concerns such as mood or behavior changes then identifying strategies for addressing those challenges. Incorporating physical activity is designed to keep both caregivers and their loved ones with dementia healthier and more functional.

Although RDAD-KC was originally designed for social workers and trained health workers to visit participants in their homes, during the pandemic, interventionists have transitioned to engaging with families remotely.

Free to participating families, RDAD-KC is funded by a $900,000 grant from the U.S. Dept. of Health and Human Services Administration for Community Living (ACL), with an additional $300,000 expected in matching funds from eight agencies across the state partnering with the KU ADC to deliver the intervention.

With 50,000 Kansans currently affected by Alzheimer's and other dementias, the demand is high for the kind of in-home, hands-on support RDAD-KC provides. That demand is expected to grow given the nation's rapidly changing demographics. People 65 years and older are among the fastest growing segments of the U.S. population, and it's projected that one in 10 people over age 65 and one in three people over the age of 85 are affected by these age-related conditions.

"I wish I could put into words the impact RDAD-KC and our involvement with the KU ADC has had on our towns and communities in North Central Kansas," said Susan C. Sprague, vice president of expansion and communications for OCCK, Inc., a nonprofit organization based in Salina, Kansas, that helps people with short- or long-term disabilities.

OCCK began partnering with the KU ADC in May of 2018 to deliver RDAD-KC. Since then, the agency has introduced the program to more than 112 individuals in eight of the nine North Central Kansas counties it serves, resulting in nearly 20 completed cases and another 15 active cases. OCCK also has actively engaged with 26 community organizations in 14 counties statewide to educate the public about RDAD-KC.

Sprague, who came to OCCK after 18 years with the Kansas Aging and Disability Resource Center, knew people with Down syndrome are at high risk for Alzheimer's disease, and that people with intellectual and developmental disabilities may not have access to important information and support related to dementia. To help address that need, she approached OCCK leadership about becoming a partner agency in RDAD-KC.

The partnership with the KU ADC not only encouraged OCCK to make Alzheimer's education, support and outreach part of its mission, but the support also allowed the agency to launch that outreach, which has emerged as an important resource in the rural communities it serves.

"This program and the partnership with KU ADC have been such a good thing for OCCK and the towns and families here," Sprague said. "The one-on-one support has been so well received. Families get their hopes up and are so thankful for the help and someone to talk to. We have hospital physical therapists and assisted living staff learning about the RDAD-KC intervention and reaching out to us. I think everyone is looking for something to offer families."

Beyond providing some much-needed support to Kansans, RDAD-KC also is contributing to the advancement of a critical overarching goal of the Administration for Community Living to bolster the nation's ability to effectively manage the wide-ranging impacts of Alzheimer's disease and other dementias.

"The Administration for Community Living really wants to make the nation more dementia capable, which means being able to support caregivers and people with dementia at every level," said Eric Vidoni, P.T., Ph.D., director of outreach and recruitment at the KU ADC. "Some groups are doing things like creating more dementia-capable communities by training bankers to recognize financial changes. We're trying to train agencies to be able to support caregivers and also give those agencies some tools to do that."

RDAD-KC also includes a component to assess outcomes for families. KU ADC researchers are measuring pre- and post-intervention caregiver strain, unmet needs and mental health. They anticipate gleaning outcomes from aggregate data and publishing articles on those findings. In addition, the grant-funded initiative is helping to fuel an increase in the number of dementia training classes for health care professionals hosted by the KU ADC statewide, especially in the intellectual and developmental disabilities community where there is a significant need for education around Alzheimer's disease.

RDAD was originally developed by Linda Teri, Ph.D., professor emerita in the University of Washington School of Nursing and adapted by the KU ADC. The intervention also has been used in other states such as Washington and Ohio. So far, RDAD-KC has been delivered to 120 clients. While the program is primarily based in Kansas City, it has a meaningful presence in 15 other counties beyond the metropolitan area, including in Central and Southeast Kansas. Efforts are ongoing to expand the program's reach to other parts of the state.

"We think of Alzheimer's disease and other dementias in such a hopeless way. We certainly don't have the science right now to reverse the disease," said Niedens. "That doesn't contain us in how we see day-to-day living. It is important to work toward assisting people in living as well as they can. Families need to know that you have the power to do something. We can figure out the complicated puzzle pieces such as behavioral issues to make disease management easier."

To qualify for RDAD-KC, individuals with dementia must be in the moderate stage of any dementia type with significant enough impairment that they cannot live alone. People with intellectual and developmental disabilities must be at risk for developing dementia, which typically is defined as age 40 or older and with Down syndrome or with multiple risk factors.

RDAD-KC will be offered through September of 2020, and partner agencies are accepting new participants. For more information, visit the program's website.